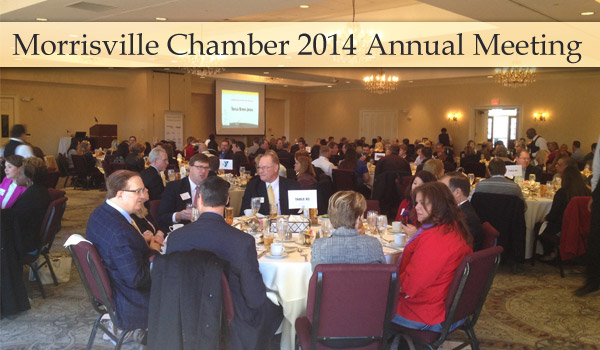 Members and business leaders had come to hear keynote speaker Adrienne Cole, new executive director for Wake County Economic Development and learn how her organization can work with town leaders to promote jobs and growth in the area.

Chamber president, Carlotta Ungaro opened the meeting as she unveiled the new Morrisville Chamber logo which incorporates an “M” and a “heart” to symbolize not only Morrisville’s location in the “heart of the Triangle” but also that the organization is a group with a focus on a “culture of caring.” Going forward all the Chamber’s committees and subsidiaries have a unified look and feel with their branding and collateral.

Small Business of the Year

The Annual meeting is also a time for recognitions and awards to members and member businesses. The James Pugh Small Business of the Year award was presented by Anthony Blackman, owner of Atlantic Tire, to Alpha Marketing owner Steve Green.

The company is a marketing communications agency that specializes in all-inclusive design, video, social media and direct marketing for their list impressive list of clients which include Quintiles, NetApp, Bandwidth and others. Green stated that after his company moved to Morrisville in 2009 from Raleigh he was so pleased with the help he received through the Chamber.  Green said that Morrisville “is the best business community in the US.” 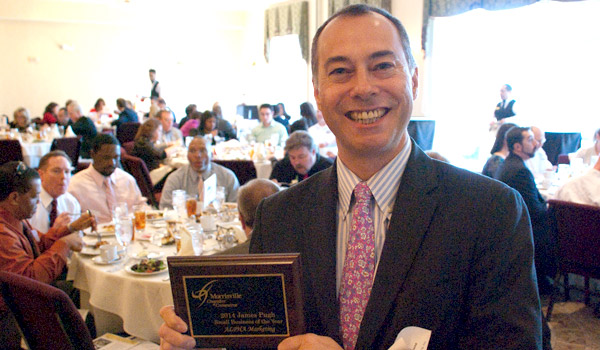 The Jeremiah Morris Community Steward Award is named for the founder of Morrisville and was presented by Roy Watson Of Blue Cross Blue Shield. The award is given to a business that gives back to the community and its employees.

Triangle Rock Club was this year’s winner. Joel Graybeal upon accepting the award said,”Ever since the movie Talladega Nights, (partner) Andrew and I have lived a life of “if you ain’t first, you’re last.'” He closed with another quote, this time from Winston Churchill “You make a living by what you earn, you make a life by what you give,” stating that is how Triangle Rock Club looks at their business and its current 52 employees and two locations. 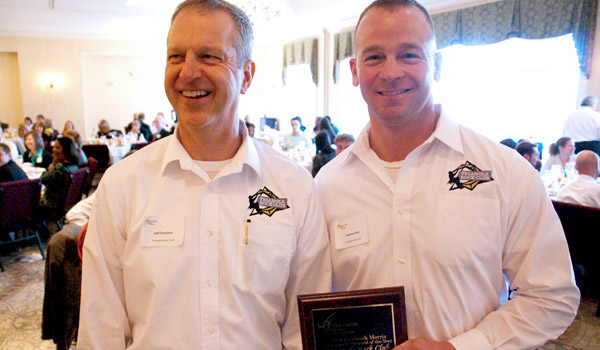 Chamber Ambassador of the Year

Ambassadors win this acknowledgement based on a point system from their service during the year. Windley has won the award previously in 2010 and 2013. 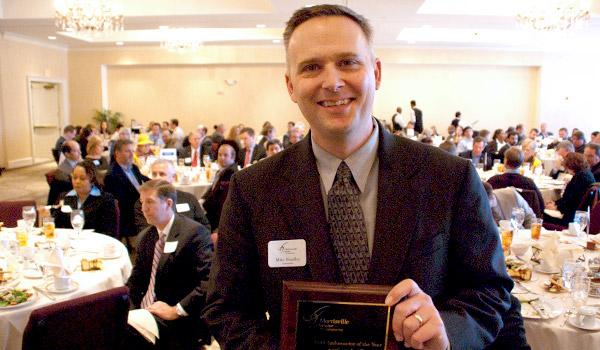 Keynote speaker Adrienne Cole had to follow all these glowing awards with a pretty dry run-down of what she does to help towns in the Triangle market themselves to companies that may relocate headquarters to North Carolina. She pushed the facts and figures that make our area attractive to prospective businesses. These include targeting industry clusters where we have other similar businesses and a talent pool.

The areas or industries with the most traction for economic development are:

33 Projects in the Pipeline

Cole stated that currently her office has 33 projects in the pipeline and that the area is well positioned to win many of these. She works closely with municipalities to try to get these projects awarded. Her office pushes the benefits of our area: its educated workforce, low cost of living, great schools. Basically what makes our area unique to potential employers. If all of these 33 projects were to be won, they represent over 14,000 potential jobs.

She summed up what her office does as it relates to economic growth in the area with five pillars of focus. They are:

In order for Morrisville, Cary and the Triangle to grow jobs and attract new businesses, it is imperative that the area articulate its competitive advantage. Apparently that’s what the Wake County Economic Development Office does every day.

Morrisville has done a good job of capturing its share of new business.  Teleflex recently announced its move to Morrisville which will add more than 447 jobs in 2014. Park West is fast approaching build-out and with it many new job opportunities, Perimeter Park has expanded and Wake Tech will soon build their new campus off 540. The Morrisville Innovation Foundation had its first 4 businesses graduate from their entrepreneur program.

As we look ahead to 2014 and beyond, its good to know there is an agency with connections that can assist our Chambers and town leaders to bring quality employment to our area.

Photos by Hal Goodtree for the Morrisville Chamber of Commerce. Visit their website at www.morrisvillechamber.org.