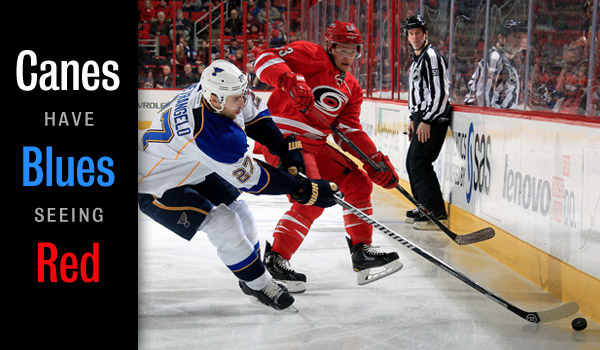 Nathan Gerbe opened the scoring early in the first period on a rare Blues’ penalty.  With Juri Tlusty tied up along the boards, Gerbe went in and snatched the puck up to Justin Faulk on the right point.  Faulk passed along the blue line to Andrej Sekera. Sekera settled the puck, saw Gerbe in the far faceoff circle then sent a perfect 60’ pass onto Gerbe’s tape.  Gerbe wasted no time and did a one timer that beat Jaroslav Halak for the 1-0 lead.

Gerbe now has 12 goals, more than his previous 2 season combined while on the Sabres.

The Blues also scored on a powerplay midway in the first on a nifty shot that caught Anton Khudobin slow to react as the shot was very quick and perfectly placed.

Both teams played a tight checking game the rest of the period that ended 1-All.

Early in the second period, Jordan Staal won a faceoff on a double clutch effort drawing the puck back to Jeff Skinner.  Skins stick handled to his right then got off one of his signature, quick wrist shot that beat the Blues goalie low stick side for a solid 2-1 lead.

Khudobin was playing lights out in goal with highlight reel save after save with one very impressive pad save off All Star Alexander Steen.

The Blues are the second highest scoring team and the entire Cane team kept them limited to the one goal with strong forechecking, strength along the boards and solid defense with contributions on every line.

Late in the third, the Blues pulled their goalie for a sixth skater.  Sekera cleared the puck from behind the Canes goal along the boards.  Alexander Semin stabbed at the puck just inside his blue line getting past the first defender.  As Semin was just about to enter the Blues zone he was hooked and brought to his knees.

Still possessing the puck with the ref’s arm up for the penalty, Semin got to his feet, cut left while Tlusty was charging the net. A Blues defender was on Semin, another on Tlusty and another playing goalie in the net but Semin still was able to thread the needle and send one in sealing the win over a strong Blues team that is sure to go deep in the playoffs.

It can’t go without saying again, it was a great team victory with special mentioning of the play by those mentioned above plus Drayson Bowman, Jay Harrison, Eric Staal, Brett Bellmore and Ron Hainsey.