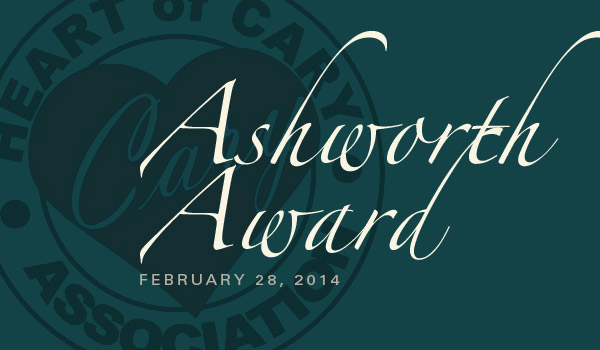 This is the third year HOCA will hold the event.

The Ashworth Award recognizes those in Downtown Cary who promote the mission of the Heart of Cary Association. It is named in honor of Ralph and Daphne Ashworth, prominent Cary business owners and the award’s first recipients.

Last year’s recipients were Carroll and Sheila Ogle whose numerous Downtown projects include the Guess Ogle House, Olde Chatham Commons and the Matthews House, the Cary Community Foundation and the Women’s Giving Network.

He was chosen for his efforts to promote the diversity and prosperity of the Downtown business community.

Mr. Westbrook moved his family to Downtown Cary in late 1969. On August 1, 1970, he opened a real estate office at 125 West Chatham St. Since that time he has been involved in the sale, development and management of real estate both residential and commercial. He has developed Parkside Shoppes, authentic Williamsburg retail Condos at 200 West Academy. Recently, he has assisted in the establishment of Cary Pottery, with son in law Kenneth and daughter Glenda.

Mr. Westbrook has helped many other business in Downtown over the years. For the last 15 or so years his business manages only the self-owned commercial real estate. Mr. Westbrook came to Cary as an active Raleigh Jaycee and continued with the Cary Club. Other civic activities include:

Triangle in Contention for Google Fiber
Scroll to top