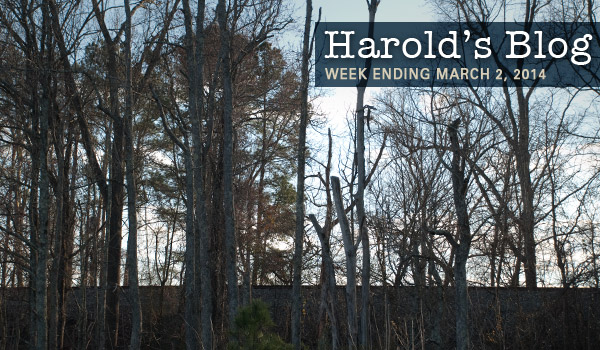 Cary, NC — This week was a busy week including long nights with little family time.

Monday I had lunch with several people about a past economic development opportunity that did not come to fruition. The focus of our time was what was done well and what we could do better. Our lunch lasted about an hour and a half.

Later that day I met with Mayor Pro-Tem Adcock, management, legal, and administration go through the agenda. The agenda items were straight forward even though there were a lot of them.

With the long agenda I predicted that we would not be finished before 11 PM.

Tuesday afternoon I joined council member Bush for the ribbon cutting for Fortnight Brewery. This is Cary’s first brewery. The owners’ original focus will be on English style beers. Remarks were given by the owners, chamber representatives, council member Bush, and me. Then we cut the ribbon. WRAL was present and did a nice story on the event. Unfortunately, I was not able to stay since I had the PRCR (Parks, Recreation, and Cultural Resources) awards banquet shortly after the ribbon cutting. I vowed to come back later in the evening for a tour of the facility.

Tuesday night I joined council members Bush, Smith, Yerha, and Frantz at the annual PRCR awards banquet which was held at the Herb Young center. There were about 400 in attendance. I gave a few remarks and was followed by the guest speaker. Our speaker was a national spokesperson for Special Olympics and was joined by her mother. Together they gave a wonderful talk on the importance of volunteering and how it impacts lives. Their theme was Volunteering is a Work of Heart. After dinner and remarks nine awards were presented to volunteers. Congratulations to all our award winners and to all the nominees. God bless them for giving their time and talents to make Cary a better place.

After the award banquet I headed back to Fortnight Brewery for a quick tour before heading home. They are positioned for expansion and it is my hope that they thrive and prosper.

Wednesday I met with financial people to sign bond documents related to our bond referendum. These included the actual bonds that were sold. Required signatures for these bond documents were needed from the town manager, the director of finance, the town clerk, and me. The entire process lasted less than 30 minutes.

Looking for a Town Clerk

The first item was to receive guidance on process to replace our long time town clerk, Sue Rowland, who is retiring as of August 1st. Ms. Rowland will be sorely missed and has been a role model for many. She not only does an exemplary job but provides excellent experienced advice to those that ask (including me).

The council decided to use the Human Resource office to handle the search for a new town clerk which should draw applications from all over the country. A sub-committee was created by the council to narrow down the search. That committee will include Mayor Pro-Tem Adcock, council member Smith, and council member Frantz. These council members have many years of experience in hiring through their professional careers. Once the list is narrowed down then the full council will participate in the interview process.

At the March 6th meeting the council will decide on the job description from information provided by the Human Resources director.

Council decided not to approve a room at the Jones House and tree guards due to cost.

Our last topic for the evening was the downtown park. Council members provided feedback on the overall concept of the park and location of various components.

While the fountain remains unresolved the rest of the park will go to the public for comment.

Thursday I headed to the Chamber of Commerce to give remarks at Sandy Jordan’s retirement ceremony. Sandy Jordan has been the lead person in Economic Development recruitment for the Town of Cary since 2006. He was significant in bringing major corporations and major expansions even during the height of the recession. Some of the corporations brought in since I have been mayor include MetLife, Deutsche Bank, ABB, Siemens, Lord Corporation. In addition, to being excellent at his job, Sandy was a great person and will be sorely missed by me and many others as we continue to do the town’s work.

On a related note, we have narrowed our search for Sandy’s replacement and should be doing final interviews soon.

Thursday night was a regularly scheduled council meeting. This meeting included the agenda items from our scheduled meeting two weeks earlier which was cancelled because of the snow.

Although we had a very long agenda our meeting only lasted about two and a half hours. There were 20 items on the consent agenda, seven public hearings, and six items for discussion.

The budget public hearing had the most speakers. The speakers were supporters of the SK8 Park and wanted the town to include a new high ramp in the upcoming budget. Their claim is that it would be unique and draw people from other states to the area. I know this was considered in the past and liability/insurance was a concern.

Saturday I gave welcoming remarks at a political event being held in Cary. I was there less than an hour. Regardless of party affiliation, I hope that everyone votes in the upcoming elections. They are crucial to our town, our county, our state, and our country.

Sunday I gave welcoming remarks at the Cary Stars of Tomorrow performances at The Cary Theater. Cary is blessed to have a lot of great teen talent. My wife and I thoroughly enjoyed the entertainment.

In the news this week was an article about art for the new firestation #2. It should be pointed out that this will be an additional option to consider and that council had asked for integrated art similar to what was installed in firestation #8. I am not sure there is support on council for this additional option.

In the letters to the editor this week it was pointed out that citizens were not thanked in the opening of The Cary Theater. Everything we do is because of the citizens and so thanks are implicit. But the point is a good one in that we should recognize it is the citizens that make everything possible. Thank you citizens for your trust and for the newest of venues.

Emails from citizens this week include a continued barrage of Google fiber supporters. Council has had well over 100 emails on this topic to date. Other emails included a complaint about potholes and a claim that the opening of The Cary Theater was not a success.

I regards to the opening of the Cary Theater, I think I reported last week that they had to turn people away. IMHO, that is a huge success. Sorry to disappoint the naysayers.

This week will be another busy week with nights away from home. It includes a Read Across America event, a ribbon cutting, a tour of Searstone, a presentation of an update of the State of the Town address, interviews with Economic Development candidates, a quasi-judicial hearing, and the Basant Bahar event.

Well that is all for this week. My next post will be on Sunday, March 9th. Although I have Facebook and Twitter accounts those are not the best means of communications with me. Please send all Town of Cary questions or comments to Harold.Weinbrecht@townofcary.org and email personal comments to augustanat@mindspring.com.