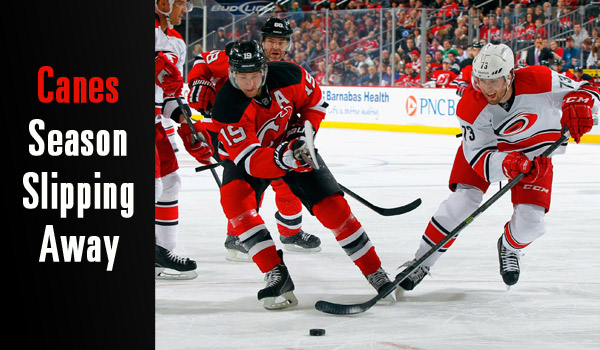 Raleigh, NC — After the Olympic break, the Carolina Hurricanes had to win about 16 of their 25 remaining games in order to make the playoffs.  After a depressing loss to the Montreal Canadians, 4-1 in their last game before the break, they were hoping to get a jump start against the NHL worst team this season, the Buffalo Sabres.

The Sabres took advantage of a lethargic Hurricane team that just didn’t have the mojo expected of a team needing 2 sure points. The Sabres won 3-2, shocking the Canes.

How the West Was One (win)

The Canes then headed west for a long road trip that wouldn’t get any easier.  First visit was to the Dallas Stars against former Canes Ray Whitney and Erik Cole.  It was nice to see Eric Staal and Cole talking at center ice during warm-ups, possibly some reminiscing about the 2006 Stanley Cup.  But the Stars didn’t offer any Texas hospitality as they dominated the Canes in a 1-4 loss for the Canes.

Eric Staal had the lone Cane goal early in the third cutting the Stars’ lead to 3-1 and giving the Canes a chance to get back in the game.  Anton Khudobin was pulled late in the game in a desperate attempt for a 2 goal miracle. The Stars ended that hope with an empty netter.

It didn’t get any easier as the Canes travelled to Los Angeles and played the Kings and former Cane Justin Williams.

The Canes came out looking better than they have since the Olympic break but again gave up the all important first goal early in the game.  The Canes got a late goal in the first from Andrej Sekera from the point. Riley Nash had the puck behind the net, went to the corner, passed up to Sekera who sent an innocent wrister into heavy traffic in front of US Olympic goalie Jonathan Quick.  The Canes gave up a power play goal midway giving the Kings the lead.

Khudobin was pulled again and with memories of the 2006 Cup Championship, Justin Williams sealed the game with an empty netter for a 3-1 Cane loss.

Too Little, Too Late

On to Anaheim to play the league leading Ducks.

The Ducks jumped out to a 3 -0 lead in the first and could have coasted the rest of the game but great teams don’t coast. The Ducks added 2 more early in the second virtually sealing the win.  The Canes never say die attitude kicked in with a highlight film goal by Andrej Sekera.  Sekera stick handled the puck over nearly every inch of ice in the Ducks end then just as he was running out of gas, went to the net and stuffed one in to get the Canes on the board.

The Canes added 2 more in the third which showed grit and desperation but came up short losing 3-5.

The long road trip would end against the playoff bound San Jose Sharks. The Canes’ Juri Tlusty scored the first goal of the game midway in the first.  The Sharks answered strong with 2 goals before the first ended a short Cane lead for the first time in 6 games.

The Canes tied the game in the second on a nice Wayne Gretzy like play by Eric Staal.  Staal had the puck behind the Sharks goal and had time to set up Elias Lindholm cutting down the slot to the goal.  Lindholm had quick hands and got off a nice one timer to tie the game.

With less than a minute left in overtime, the Canes were very aggressive in the Sharks end.  Sekera took a shot from the point that was block in front.  Lindholm picked up the rebound and made a beautiful behind the back pass to Jay Harrison coming in from the left point for an easy tip in to give the Canes their first win on this long road trip.

The trade deadline came on Wednesday March 5 with the Canes trading fan favorite Tuomo Ruuto to the New Jersey Devils for Andrei Loktionov. Ruutu’s salary and lack of production was the main reason for the move.  The Canes are picking up a portion of his salary for an undisclosed period of time.

No doubt the Canes were listening to offers that included trading a goalie but with not being in an absolute need to make a change, didn’t hear anything worthwhile.

The Canes played the New York Rangers for their one game home stand on Friday March 7th in front of a good crowd.  Jordan Staal scored a goal late in the first on a nice snap wrister on the high glove side of world class goalie Henrik Lundqvist giving the Canes their second consecutive 1-0 lead.

That lead held up going into the third when the Rangers turned on their offense. After the Rangers tied it up early, Jeff Skinner scored on a penalty shot that was as pretty as they get to put the Canes up 2-1.  The Rangers kicked in high gear and put in 2 goals in a 4 minute span, adding an empty netter to send home the win-thirsty Caniacs disappointed.

Canes Have a Devil of a Time with Devils

The Canes closed out the week with an exciting and strange game against the team they made the trade with earlier in the week, the New Jersey Devils.

The Canes came out flat and were fortunate the Devils only led 1-0 after the first.  Early in the second, Skinner scored a goal from behind the net he intended to deflect off future Hall of Famer, Martin Brodeur. The Devils then put in 3 goals in about 4 minutes and that was all for Khudobin and Cam Ward took over with 27 minutes to go.

The Canes came back with 3 unanswered goals of their own.  First Jay Harrison scored a power play goal snapping an 0 for 27 streak.  Nathan Gerbe answered the Devils short handed goal with his own to keep the Canes leading the league with 10 shorties.  Alex Semin scored on a spin-o-rama goal from the high slot that was all instinct.

With 6:30 left, former Cane Ruutu scored against his old friend, Cam Ward, sealing the win for the Devils.  Fair or unfair, Ward got pegged with the loss with just giving up the one goal.  Ward did play well but after Khudobin got pulled, the defense was much better.  The Canes just have to get it all together for 60 minutes.