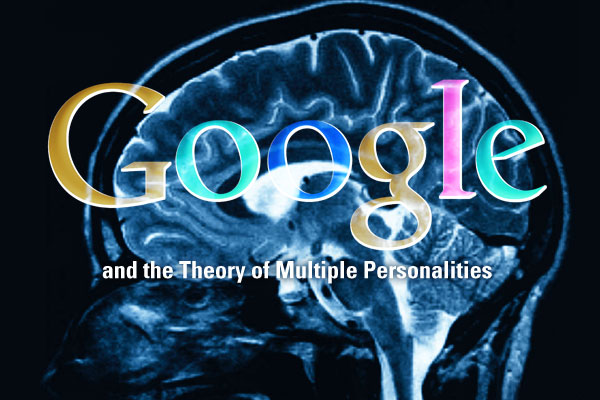 This story first appeared in the Journal of Technology Tank.

Cary, NC — All the hoopla and stories recently in the Triangle have been about Google Fiber. But here’s an observation you may not have heard elsewhere: Google now fully embraces the Theory of Multiple Personalities. Thank heavens.

The Web as a Model of Human Behavior

The web has always been a model of human behavior, albeit an imperfect one. But, as time unfolds, the model becomes more a reflection, thanks in part to the advent of Big Data.

First There Was Myspace

Remember, this is a story about multiple personalities.

Myspace was all about multiple discrete personalities. In fact, because there was no solid verification process, you could have multiple, discrete, anonymous personalities.

(Note: I use Myspace in the past tense, but it’s still there. I wonder who visits?)

When Facebook rolled out to adults (it had first rolled out to students), it was widely perceived as the anti-Myspace. You had to be someone real – and verified – to have a profile. Multiple profiles were frowned upon in the TOS (terms of service).

Facebook rose in popularity, in part, because it was regarded as the “safe” alternative to the Wild West of Myspace.

The Emergence of Multiple Pers0nas

But even Facebook recognized the need to accommodate multiple roles for individual users. Thus, Pages was born.

So, now I can be the private me, the business me and the band me.

Being more than one person on Google had, in the past, been something of a problem. You had to log out as one user and log back in as another to admin a different account. I couldn’t really set up and manage a page for clients without setting up a new Gmail account and password.

But over time, Google has found a way to let users consolidate multiple personas. Now, I get a drop-down which reads “Use Google As…” and list all my personas.

Wow, this is helpful. But more importantly, it’s a better reflection of human behavior.

After all, most of us are multiple people – parent, worker, volunteer or enthusiast, advocate, corporate officer or elected official. How many people are you?

Heck, I set up personalities for people on the web. We call them brands.

Not true, I respond. A persona is simply an identity online. But each persona has its own personality – hipster, cheerleader, skeptic or cynic, for example.

We speak about brand character. But what is character but an expression of personality – warm or cold, friendly or formal, male or female.

In our multi-faceted modern lives, we have multiple personalities to fit our situations of existence – soccer coach, school teacher, grandmother or Godfather.

The Merger of Man and Machine

More on this later, but I’m firmly convinced that the 21st century is ushering in the merging of humans and machines.

For now, consider this:

The way the web models us, changes us.

Myspace modeled a creepy world and we became a somewhat creepy society.

Facebook made us more social, but perhaps also more superficial.

I like the neutrality of Google personas. When the machines simply reflect us, maybe we can find the best angle to highlight our good features.

Hal Goodtree is a fellow at TechTank and the publisher of CaryCitizen.

CaryCitizen is sponsored in part by Fit & Able Productions in Cary.