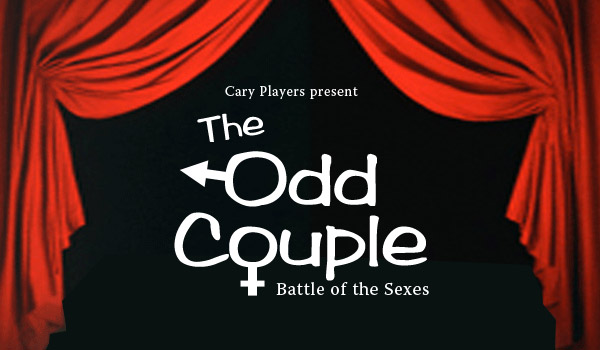 Cary, NC — In the finale to their 12th season, The Cary Players are performing both versions of the famous Neil Simon play The Odd Couple this April.

Two Versions of The Odd Couple

This April, Cary Players wraps up their season of comedy with an “Odd Couple Extravaganza,” producing both the original 1960’s version of Neil Simon’s classic comedy The Odd Couple and his updated female version of the same play crafted two decades later.

While marketed as a “Battle of the Sexes,” Lyman Collins who directs the female version of the show, explains, “The project is more in the spirit of collaboration than competition.”  Collins adds, “I was immediately on board; it’s a rare opportunity to see Simon’s work from two completely different points-of-view.  With two outstanding casts showcasing such talent, this promises to be a highlight of the theatrical season!”

Staci Sabarsky, who’s past Cary Players directing credits include The Rainmaker, directs the male version of the play.

Ms. Sabarsky notes, “Many of us grew up watching The Odd Couple on TV or have seen the movie.  The challenge in doing this show is making this production our own while still staying true to Mr. Simon’s work.  I have encouraged my actors to create their own interpretations of these iconic characters.”

While the decision to produce both shows may be simple, the challenges are very real.  “The basic floor plan of a NYC apartment is the same, “ says Set Designer Tina Vance.  “Changes will be made to furniture, window treatments and decorative accents to represent different decades and styles between Oscar Madison/Felix Unger and Olive Madison/Florence Unger.

The dual casts feature many talented actors: Sean Brosnahan and Bill LaFrankie take on the roles of Felix and Oscar.  Page Purgar and Amy Bossi-Nasiatka portray Florence and Olive in the female version.  Each cast will perform five times the first two weekends in April, totaling 10 shows in all — the most ever taken on by Cary Players in a single run.

“Our hope,” says Producer Debra Grannan, “is that folks will see both shows to truly appreciate the genius of Neil Simon, and reach their own conclusion as to which sex are the fairer performers, and naturally to see which show has the higher attendance!”

To that end, Cary Players is offering special ticket pricing to audience members who enjoy a “Double-Play” and attend both shows.

Tickets are available at the Cary Arts Center Box Office or at CaryPlayers.org.