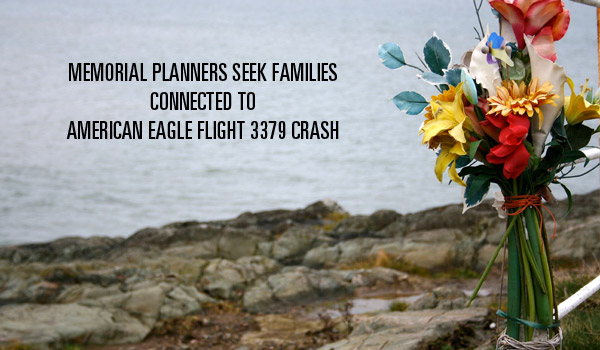 Cary, NC— Plans are underway to build a memorial to honor passengers, crew and emergency responders involved in the 1994 accident of American Eagle Flight 3379. Those behind the effort are seeking to connect with people who would like to attend the ceremony dedicating the memorial.

The Family Assistance Foundation and families and friends of AE Flight 3379—which crashed about 4 miles SW of the RDU Airport in the vicinity of Morrisville, NC on December 13, 1994—have joined together to establish a memorial to honor the deceased passengers and crew, as well as the survivors, emergency responders and airline employees who assisted in the response.  A location has been secured near the accident site where a park and the memorial will be built. Construction should be completed in 2015.

For now, volunteers are seeking contact information for anyone who survived the accident, had a family member on board the flight, responded to the accident, or lived in the community and might like to be present at the dedication ceremony next year.

“So many people have worked together to make this beautiful memorial a reality,” said Marie Anderson, the mother of one of only five survivors of AE Flight 3379 and a Family Assistance Foundation volunteer.

“Over the years, we’ve lost touch with some of the family members of the flight’s passengers and crew, and we’re eager to connect with them to make them aware of the memorial project and, of course, to have them present at the dedication if they’d like to come.”

This announcement by the Family Assistance Foundation is made to ask anyone who was affected by this tragedy to let us know if they would like to be placed on the mailing list for all activities related to the establishment of the memorial, and to receive an invitation to the dedication, which will likely be in 2015.

Marie Anderson’s daughter, Lauren, was a 19-year-old student at Elon College (N.C.) at the time of the accident. Since the accident, Marie, her husband Rich, and Lauren have become strong advocates for family assistance programs.

For more information about the AE flight 3379 memorial project, please email Dede Young at the Family Assistance Foundation or call (404) 881-2895.

A group page has also been set for the memorial project on Facebook.

Two Versions of “The Odd Couple”
Scroll to top