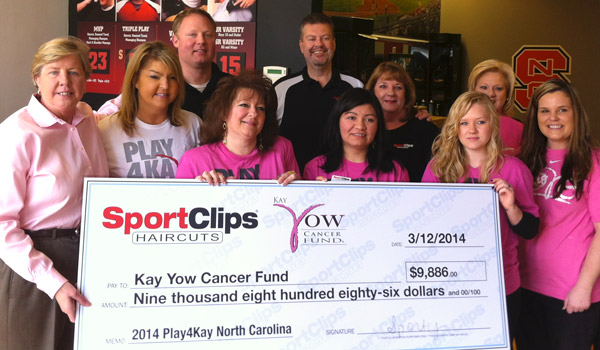 Cary, NC — During February, Sports Clips locations throughout North Carolina participated in a hair cutting fundraiser to try to raise $5000 for the Kay Yow Cancer Fund.  They almost doubled their goal.

Sport Clips Haircuts presented the Kay Yow Cancer Fund with a $9,886 check today representing the efforts of its more than 40 North Carolina locations to raise funds for women’s cancer research. From February 15 to 22 Sport Clips across the state pledged to donate $1 from every “MVP Experience” haircut given to the charity and also purchased pink Nike Kay Yow branded T-shirts for the stylists to wear during the campaign.

“Our stores were very motivated to exceed our pledge goal of $5,000, as many of our team members and clients have been personally affected by cancer,” said Matt Lewis, Sport Clips area developer for North Carolina. “It’s been a wonderful experience to partner with the Kay Yow Cancer Fund in support of this worthy cause and one of our state’s most inspiring sports figures.”

The Kay Yow Cancer Fund has three primary goals and objectives. The primary goal is to fund scientific research for all women’s cancers, not just breast cancer.

The second objective is to assist the underserved. An example of this effort is the support the Kay Yow Cancer Fund has provided in support of Rex Hospital’s mobile mammography units.  More than $230,000 has been granted to the Rex Foundation for digital imaging equipment on two mobile mammography units.  The mobile units provide free mammograms to women who may otherwise not have a mammogram due to financial constraints in 17 counties in North Carolina.

“We are so pleased with Sport Clips’ statewide effort to partner with and support the KayYow Cancer Fund,” said Sue Donohoe, executive director of the Kay Yow Cancer Fund. “This is exactly what Coach Yow envisioned when she created the Fund six years ago – people coming together and uniting for a common cause.”

Sports Clips has 15 locations in the Triangle including three in Cary.

Tech: Say Hello to Your New Lightbulb
Scroll to top