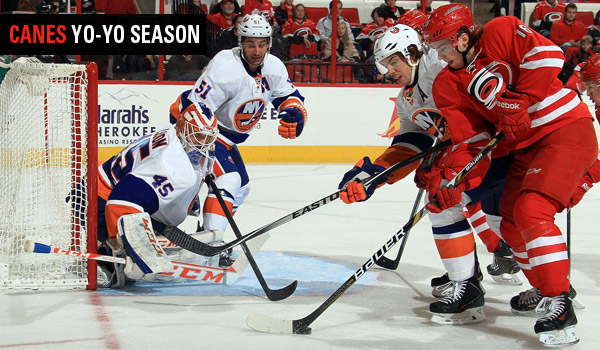 Raleigh, NC — The NHL Carolina Hurricanes just can’t seem to get a winning streak going at a time they need it. In the past week, the Canes won against the Winnipeg Jets 3-2 in Winnipeg, lost a crucial game against the New York Islanders 5-4 at home, won in Florida against the Panthers, 3-0, then lost at home to the Columbus Blue Jackets, 3-2 in overtime.

The Canes don’t seem to get it but it’s called home ice advantage for a reason.

Cam Ward started in goal for the first time in several games and played like the Ward of old.

After a scoreless first, Eric Staal answered a Jets goal with his 17th of the year. Juri Tlusty used his speed to steal the puck from the Jets goalie who was trying to clear the puck behind the net.  Tlusty tried a wraparound but was stopped.  The puck  bounced around the crease area then Staal skated hard down the low slot, sending a nice wrister through the maze for bodies in front of the net to tie the game.

A couple of minutes later it was Jordan Staal scoring a rare powerplay goal for the Canes on assists from pointmen Andrej Sekera and John-Michael Liles. Riley Nash gave the Canes a solid 3-1 lead a minute later off nifty passing from Jeff Skinner and Pat Dwyer.

The Jets scored early in the third and put a lot of pressure on Ward, with Ward making what the NHL is calling one of the best saves of the year, but the Canes escaped with the 3-2 win.

The Canes dug a hole against the Islanders that was totally inexcusable.

The Islanders scored 3 goals in the first 6 minutes forcing Cam Ward to make one of his earliest exits from a game in his career. Not all of the goals were Ward’s fault, the defense can’t allow opposing players to hack and whack at the puck in the crease.  The Canes need big, take no prisoners type defensemen that can clear the crease giving whoever is in goal a chance.

Anton Kuhdobin made a save on the first shot but lost sight of the rebound that allowed an easy tip in for a 4-0 Isles lead with just under 11 minutes gone.  The Canes woke up and played like the desperate team they are.  Skinner scored a powerplay goal and newest Cane Andrei Loktionov scored on a pretty wrister off an assist by Sekera closing out the high scoring first 4-2.

Alexander Semin, on his own hot streak, scored the Canes second powerplay goal of the game on a snap-wrister that was like a laser. The Isles scored late in the second but Nathan Gerbe kept the Canes momentum going with a goal just 20 seconds later.

Both teams buckled down for a scoreless third with the Canes losing a killer game at 5-4.

The Canes completed a season sweep against the Florida Panthers and Khudobin’s first shutout as a Canes in a 3-0 win keeping the extremely slim playoff hopes alive.

Juri Tlusty scored a nice goal off a pass from Staal to get the all important first goal of the game.  After Staal fought off a defender, he passed over to Tlusty on the right side of the goal.  Tlusty held on to the puck then sent a snap wrister after the Panther goalie committed to what he thought was going to be a far side shot.

Early in the second, Loktionov entered the Panthers zone then sent a shot towards the goal that was blocked by a defender. Tlusty was in the right place at the right time as puck ended up at his feet and he sent a quick wrister into the net to give the Canes a 2-0 lead.

Just a couple of minutes later, the Canes had a weak 2 on 1 with Pat Dwyer and Skinner going in fast to the goal.  Dwyer had possession of the puck using Skinner as the decoy, took the shot and followed his rebound to the back of the net. Dwyer tried a wraparound that was thwarted but Skins was there for a patented backhander high into the net for a very comfortable 3-0 lead.

The Canes tightened their defense in the third all working to help Khudobin get his well earned first Cane shutout.

The Columbus Blue Jackets were in town and similar to the Canes need every point possible to stay in the playoffs.

After a scoreless first, Skinner opened the scoring with his team leading 29th of the season. Riley Nash worked hard down low then sent a centering pass to Skinner.  Skinner tried a quick shot but was stopped, Elias Lindholm was charging down the slot, touched the puck back over to Skinner who lifted the puck from point blank range to the top corner for a 1-0 Cane lead.

The Canes lead was short lived as the Jackets answered about 90 seconds later to tie the game.

In the third period, the Canes had one of their prettiest powerplay goals of the season with the ‘young line’ on the ice.  Old man Jay Harrison started the play making a cross ice pass to Nash.  Nash made a crisp diagonal ice pass to Loktionov who took one stride then sent a wrist shot along the ice far side for a 2-1 Cane lead.

For the second time, give the Jackets credit as they came back to tie the game less than a minute later.

The game went into overtime and with a flurry of action in front of the Canes net, while on his knees, Tlusty grabbed the puck and sent it behind the net.  Great play but unfortunately the refs saw the illegal play and that gave the Jackets a huge 4 on 3 powerplay advantage.

The Jackets converted on the powerplay keeping the win one, lose one streak alive for the Canes.

Gardening: What To Do With Spent Bulbs