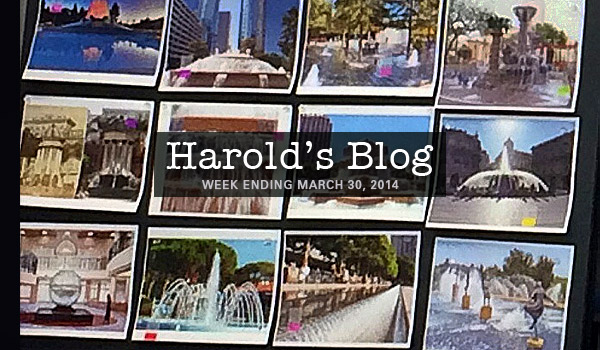 Cary, NC — This week was full of events and meetings and included a work session and council meeting.

Since this was a week that included a regularly scheduled council meeting, I started Monday by calling council members for concerns or questions about Thursday’s agenda. I was able to contact five out of the six council members and they had no issues. This was not surprising since the agenda only had one public hearing and three items for discussion.

Later Monday I met with management, legal, administration, and others to go over the agenda. There were no issues that came up so I predicted our Thursday meeting would last about an hour and a half.

My regularly weekly scheduled meeting with the town manager was cancelled since we had no new issues to discuss.

I started Tuesday by talking to the 2014 Cary Chamber Youth Leadership Group made up of a group of high school students from various schools. I spent about ten minutes talking about the council manager form of government, authority given to council by the legislature, and my duties. I then answered questions for about ten minutes.

I was stumped by a one question asking if there was a movie about my life what actor would I want playing me. Gosh, that thought had never entered my mind before and so I said Tom Hanks who is one of my favorite actors. Most of the other questions were more related to my function as mayor.

Tuesday evening the council held a work session on two topics: the downtown park fountain and the Academy Street streetscape.

The downtown park is about 25% designed and the decisions for the fountain are needed before design can be completed. The council went through a charrette to determine characteristics of the fountain that included water effects, lighting, interactiveness, structure and aesthetics. This began with an exercise of putting different colored stickies on pictures that were submitted by council in the past few weeks.

Afterwards council members made comments about their selections. The descriptive comments had “lots of water”, “lights”, “a wow factor”, “not a look of bird baths stacked”, and “traditional”.

The staff and consultants will take this information along with the pictures we selected and will present three concepts at a future date.

The next work session was on the Academy Street streetscape.

In this work session, staff presented information about phasing on construction, traffic routes, detours, and access to businesses. Council also decided on acceptable tree grates and honestly, most council members didn’t have an opinion. The next step for the streetscape will be a public meeting which is scheduled for Monday, May 12 in the Herb Young Center.

Construction on the Academy Street streetscape will begin in the spring of 2015 and last about a year.

Staff gave a presentation on Jordan Lake and the Western Wake Regional Wastewater Facility. Afterwards, I briefly touched on the town’s advocacy principles and then talked about our 2014 agenda which was unanimously approved by council.

I emphasized that changes to the privilege license tax should be revenue neutral, a strong regulatory framework for shale gas development should be in place to protect citizens, we strongly oppose House Bill 150 on limiting the town’s zoning and aesthetic controls, and support and maintain legislation that would protect Jordan Lake.

Our meeting ended after about an hour and a half.

Wednesday I taped the April episode of Cary Matters with Gale Adcock. Each month the Cary Matters script is written by me or council member Robinson. It is turned in to the Public Information Office for fact checking and then usually taped on the last Wednesday of the month.

April’s episode will include issues related to spring and answers to a few questions. Our taping session lasted about 30 minutes.

Thursday I visited the Chamber of Commerce and talked to their leadership group for about 30 minutes. In my remarks I talked about my duties, economic development, and how the strong partnership between the Chamber, council, and staff has been beneficial to Cary. It was very informal and included a lot of interesting questions.

One fun question I received was from the owner of the Dairy Queen who asked what kind of Blizzard would I order. Since I am a vanilla loving guy I said vanilla with Oreos.

The meeting included a public hearing on the Consolidated Housing and Community Development Plan and the FY2015 Community Development Block Grant Annual Action Plan. There were also three items for discussion that included a rezoning, a facilities naming policy, and a request to extend a developer agreement. The extension was unanimously denied and the rezoning and naming policy were unanimously approved.

Deputy Chief Nickalson has served the Cary citizens for 25 years and was Deputy Chief for six years. His personnel file is filled with letters and accolades from Cary citizens. He leaves behind a foundation for the Police Department to grow and prosper in the future.

We will miss him. God bless him and his family.

Saturday I had the honor in participating in the Eagle Scout ceremony for Jack Henry and Bhavik Modi.

Bhavik joined the scouts at the age of 15 and earned his Eagle in just 2 ½ years which is astounding.

I have known Jack all his life since he goes to my church. And I was his mentor when he was in conformation class. So it was very special for me to participate in his ceremony.

Their mission is to operate a multi-faceted recovery and prevention center that connects with non-profits worldwide to provide support, healing, services, and resources to hurting people, specializing in reaching youths and individuals in crisis.

I am glad they are here in Cary and they will change lots of lives. God bless them.

Emails this week included a building permit summary from the homebuilders association. Cary pulled 97 single family permits in the last month which was more than any municipality in Wake County including Raleigh. Our permits are up 9% from last year.

I also received an email from council member Bush that Cary was ranked as the # 3best place to retire to according to Forbes magazine. Cary is turning older with 4,000 residents turning 65 each year.

Emails from citizens included a criticism about a proposal that hasn’t reached council yet, several emails for and against various rezonings, and another round of complaints about the Mayton Inn from the same people that have complained numerous times.

This week is filled mostly with events and ribbon cuttings. There is a quasi-judicial council meeting to hear several issues in a court type setting.

Well that is all for this week. My next post will be on Sunday, April 6th. Although I have Facebook and Twitter accounts those are not the best means of communications with me. Please send all Town of Cary questions or comments to Harold.Weinbrecht@townofcary.org and email personal comments to augustanat@mindspring.com.