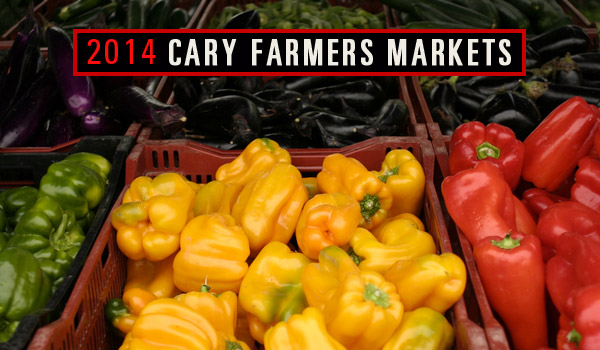 Cary, NC- We are fortunate in Cary to live where we can easily shop for healthful food selections. We have organic grocers, international grocers and giant grocers. We also have 3 (count ’em) farmers markets. Two of them open this weekend, with the third opening later this month.

The three Cary markets are located in three distinctly different areas of town. 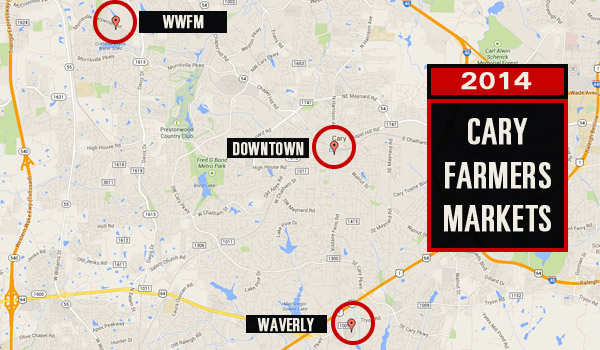 The 6th season of the Western Wake Farmers Market starts on Saturday, April 5, 2014. Opening day usually offers lots of fun activities for the whole family and this year is no different.  Stevan Jackson will be playing lively farmers’ market melodies from 9:30-11:30am. Face-painting fun for kids will be done by LynneSue Fischer.

Each Saturday, the market has musical entertainment and a wide variety of educational programs. Here’s this month’s line-up:

Market shoppers will be entertained by the musical styling of Thunder and Spice (April 12), Tom Voorheis (April 19), and Joseph Piazza (April 26).

Madison Whitley, the market’s manager, says it was tough meeting demand for fresh produce in the winter months because they have seen an uptick in customers. To meet demand this season, three new farmers will be selling produce along with two new meat vendors. The market will increase to 50 vendors (some of whom are seasonal), with 40 retuning from previous seasons and 8-10 are brand new. Fortnight Brewery will be selling their growlers of English style beers at the market too.

135 W. Chatham Street in front of the Ivey Ellington-Waddell House.

Cary’s oldest farmers market turns 22 this spring when it opens on Saturday April 5, 2014. They are moving again (this will be the market’s 4th location) to the historic Ivey Ellington-Waddle House (the gothic revival house) on West Chatham Street.

On opening day, fun-loving pirate band The Motley Tones will be bringing their own brand of song to the market as well as a welcome with Cary Mayor Harold Weinbrecht.

For the past 2 years, Cary Downtown Farmers Market was located in the parking lot on South Academy Street. This summer, the Mayton Inn will be breaking ground for a boutique hotel on that location. Rather than wait to be pushed out, the market “actively took matters into their own hands,” according to market manager Karmen Paterson, ” to find a new place, instead of having to re-locate mid-season.”

After a fundraising conversation with Lucky Pie Gallery, Karmen was told she could put the market in their parking lot on West Chatham. She then spoke with Downtown Manager Ted Boyd who loved the idea. That got the ball rolling and the Town was soon on board for the move.

This season there will be 20 vendors, with a bigger emphasis on “farm variety”.  Two sellers will have cheeses, one from cows milk, and the other selling goat cheeses. There will be two new meat vendors: Coon Rock of Hillsborough selling beef, pork, chicken and lamb, and Queen Bee, selling a variety of game including rabbit, duck, turkey, beef and chicken.

Karmen added that there will be more seasonally appropriate produce like pumpkins, blueberries and blackberries with some of the new produce vendors.  View their website to see what produce is in season.

Market Opening Day is April 26, the weekend after Easter. Market manager Angela Slater said that they moved back opening day to allow their vendors to bring a greater selection of produce on the first weekend. The center has lots of fun planned as this year they are combining the market opening with a Spring Festival in lieu of their former Easter Bonnet event.

When you visit the Waverly Market, you will immediately notice that the market has a more cohesive and branded appearance than other markets. That’s because the shopping center provides all their vendors with Waverly Tents. It keeps everything looking crisp, and more uniform, and makes set up easier, which is done by the center for the vendors.

New this year is the move from the former location in the back parking lot, into the grassy area known as “The Promenade” where concerts and events are held year round at Waverly.

The opening day will feature a fashion show with a runway, and clothing by Gigi’s, Finleys, Violets and Green Pea Baby. A bonnet making station will be set up where visitors can make decorated spring hats and then strut down the runway for the annual bonnet competition.

There will also be cooking demos with fresh ingredients and face painting for the children.

How Do You Spell Farmers Market?

In our humble opinion, no apostrophe is necessary in “farmers market”. Why? Because it’s an adjectival noun – a noun that is acting like an adjective. AP Style calls this a descriptive phrase, not a possessive phrase.

What kind of market is it? A market of farmers.
On the other hand, we’d refer to a farmer’s land as indicating possession of a piece of property.

Visit a Market This Weekend

Hopefully we have kissed Old Man Winter good-bye and we have plenty of sunny days ahead to enjoy our growing outdoor farmers markets in Cary!

This story is sponsored in part by Waverly Place and by the Western Wake Farmers Market.