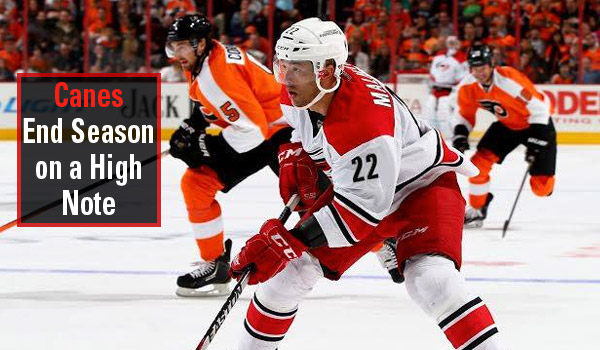 Raleigh, NC — The Carolina  Hurricanes finished a very disappointing season with two wins in a row with the finale a 6-5 shootout win over the playoff bound Philadelphia Flyers. Two days earlier they beat the Detroit Red Wings, also playoff bound, in a solid game.

The Canes young guns of Jeff Skinner, Riley Nash and Elias Lindholm were forechecking well in the Wings end.

Just as the puck was about to clear the zone, Mike Komisarek kept the puck alive and dumped in towards the net.  Skins picked it up in the high slot, had the puck checked away but Nash was there to gain possession.  Nash made time and saw that Skins went to an open area just outside the opposite faceoff circle. Nash made the pass and Skinner sent a high wrister for his 32nd goal of the season.

A few minutes later Eric Staal carried the puck out of his end, passing up to Juri Tlusty in the neutral zone.  Tlusty left a drop pass to Staal as he crossed the blue line.  Staal took a couple of strides then sent a hard, low shot that easily found its way to the back of the net.

The Flyers scored a minute and a half later on what appeared to be a missed assignment on defense.

A short while after, Komisarek made a great 90’ pass to the tape of Manny Maholtra at the far side of the neutral zone.  Maholtra went straight to the net using Radek Dvorak as a decoy on the right.  Maholtra made a head fake for the pass then sent one five-hole for a 3-1 Canes lead.

Very early in the second, similar to a play in the first, Tlusty dropped a pass to Staal.  Staal deeked around one player then sent one far side for a commanding, or so the Canes thought, 4-1 lead.

Whether it was overly confident, worrying about tee times, or some words by the Flyers coach, but the Flyers scored 3 times in a 3-1/2 minute span to tie the game.

The Canes young guns thought they had the game won when they scored late in the third on a power play. Lindholm sent the puck in the Flyers end but the puck took a wicked bounce off an upright that landed in front of the net. Andrei Loktionov was in the right position and took a quick shot that went right off the goalie’s arm.  As nectar is to bees to make honey, loose pucks in front of a goal is to Skinner to score goals and he notched a career season high 33rd, to put the Canes up 5-4 with less than 5 minutes to play.

As expected the Flyers pulled their goalie for a 6th skater and scored with just 10 seconds left to tie it up.

After a scoreless overtime, Eric Staal scored the only goal in the shoot out with Anton Khudobin impressively stopping all 3 shots to have the Canes end the season on a 2 game winning streak.

Next article will address potential personnel changes and a season summary.