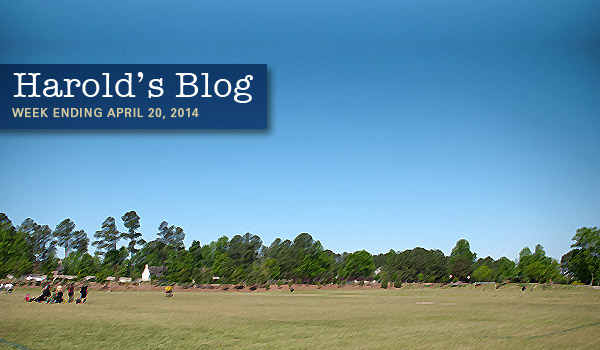 Cary, NC — This week was filled with events and meetings.

Tuesday was my first meeting with staff on the budget.

Some of the highlights of the staff recommendations include no tax increase and no additional debt, an increase in the operating budget of around 3%, an increase of 25.5 staff positions (mostly in the police department), $51.2 million in capital projects, and other investments to address the town’s goals identified through Priority Based Budgeting.

Wednesday started with a monthly meeting of the Capital Area Metropolitan Planning Organization’s (CAMPO) Transportation Advisory Committee made up of 29 mayors, commissioners, and councilors from the area. This agenda had two public hearings, several informational items, and one item for action. One item of note for Cary was the CAMPO recommendation to the Federal Transit Administration for transit apportionment. In that Cary would receive $1.7 million in funding. One other note of interest is that CAMPO is looking to sign a long term lease for a new location. Four are under consideration and are located in downtown Raleigh. Our meeting lasted about an hour.

Later Wednesday I spoke to a group at the First United Methodist Church in Cary. Some of the questions I was asked include: What do you see as the greatest needs for Cary in the next five to ten years? What do you think Cary downtown would look like in 2025? What is your connection between public service and your faith? What is the importance of churches in Cary? What is the most important thing churches can do for Cary in the upcoming years? We had a good conversation and my visit lasted about an hour.

My final visit Wednesday was an event for someone running for a congressional seat. I was able to talk to several Cary residents about things that are important to them.

Thursday evening I attended the official kickoff for Mayor Pro-Tem Adcock who is running for the North Carolina House of Representatives. Joining me from the council was Bush, Frantz, and Yerha. N.C. Senator Josh Stein was the introductory speaker. Ms. Adcock gave a great speech. She would be an amazing representative for Cary and it is my hope she will get that chance.

Saturday I had the pleasure of entertaining the two chaperones from a student exchange program with one of our sister cities Le Touquet, France. My wife and I hosted students from this program for several years starting in the early 2000s. We are fortunate that our first student still stays in touch with us. Through these students we have become friends with one of the chaperones and look forward to her visit every year.

Sunday I attended the ceremony for the purification of deities at the Hindu Temple Sri Venkateswara in Cary. It was an honor to be involved in one of their holiest days of their temple. This day coinciding with one of the holiest days in Christianity, Easter, reminds me of what a great diverse community Cary has become. I was joined at the event by Mayor Pro-Tem Adcock and NC Senator Stein. I was there about an hour.

This week I received a phone call from the council sub-committee chair that is searching for the new town clerk to replace Sue Rowland who is retiring on August 1st. There were over 150 applicants and after several interviews they have been narrowed to the final four. The sub-committee will make a recommendation to council soon and then council will hold sessions to interview candidates.

In emails this week the homebuilders association sent housing information for the month of March. Cary issued 114 permits for the month compared to 121 permits in Raleigh. This is a 12% increase during the last 12 months.

This week will be a busy week. On my calendar is a council meeting, a work session, a Mayors Association meeting, an elected official’s reception, a charity bed race, and other meetings.

Well that is all for this week. My next post will be on Sunday, April 27th. Although I have Facebook and Twitter accounts those are not the best means of communications with me. Please send all Town of Cary questions or comments to Harold.Weinbrecht@townofcary.org and email personal comments to augustanat@mindspring.com.

Canes End Season on a High Note
Scroll to top