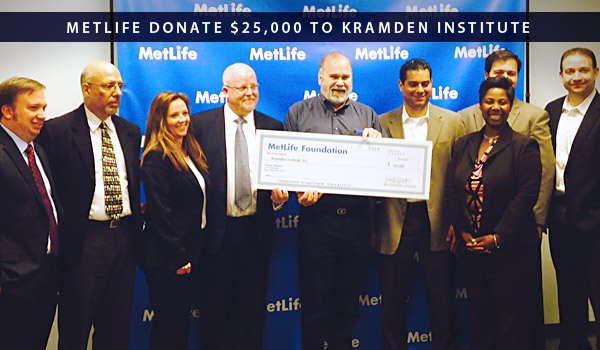 Upon accepting the check, Kramden founder Dibner  told an anecdote about his grandfather, who was so proud of the work he did helping people as he worked for 25 years with the same company. Dibner later concluded with the fact that the company his grandfather worked for was none other than MetLife, and how that idea had come full circle today.

Geoffery Lang, GM of the Raleigh site, spoke about the alignment of MetLife’s mission with the work that is going on at Kramden, a local non-profit that refurbishes donated used computers and awards them free of charge to deserving youth in our state.

Lang went on to say,  “Technology is what drives our business. Kramden makes computers a reality, and MetLife is proud to be a part of the work that Mark Dibner started with his son in 2003 in a pilot program.  The use of technology to better folks’ lives is something that’s very important at  MetLife.”

The new Cary MetLife location, currently under construction on Weston Parkway, will one day house 2200 employees working on technology to be used globally. Most MetLife Cary jobs will be in information technology and engineering, and the average salary on the campus will top $100,000.

The company has already hired 400 people, who are working in two temporary locations (called incubator 1 &2)  in Raleigh and Durham, while the Cary site is being built. MetLife’s first building should be ready by February 2015 followed by the second building in April. Their site plans include a possible expansion with a third building.

The MetLife Foundation first heard about Kramden from one of their own employees, Don Rowe, who has volunteered regularly for five years at the Institute. Aowe has even recruited a whole Met Life “army” who volunteer to rebuild computers. He reached out to the MetLife Foundation.

“The MetLife Foundation was established in 1976 to make a difference in people’s lives”,  according to Jim O’Donnell, Senior Vice President. The Foundation has a goal to donate $200 million over the next five years globally to the communities in which they are located. They have plans to continue their involvement in Kramden, and that day began talking about how they could help some of the disadvantaged youth have access to affordable internet, yet another issue with technology for under-served communities.

Angela Caraway, Founder of The Caraway Foundation, partners with Kramden Institute to connect kids in Anson County to computers. The small population in Anson has one of the highest rates of poverty in North Carolina.

“Its amazing to watch kids come in to the room full of computers with bows on them. And they hug it, as you tell them it will be theirs forever. Then you see the parents with tears in their eyes, saying if it wasn’t for the Caraway Foundation they couldn’t have this” . The foundation’s goal is to make sure that the entire county has the chance to excel.

“Kramden helps bridge the digital divide for these students” said Geoffrey Lang as he presented the check. That phrase “Digital Divide” was repeated many times during the morning to describe the gap between folks who have computers at home and those that don’t have that access.

Kramden Institute is the only organization (that we know of)  in the nation making computers available at no cost to disadvantaged people. They not only give the kids (aged 6-18) computers, but train them how to use them safely. Every computer comes pre-installed with open-source operating system called Ubermix, which are pre-loaded with 60 free programs. Everyone is trained on how to access the software and use the programs, and can even download more free software.

It Takes an Army

Kramden has grown exponentially since CaryCitizen first wrote about them 2 years ago. Since that time, over 7,000 volunteers have helped refurbish and deliver 16,000 computers to people in this state who wouldn’t have access to computers without them.

You can find them every Wednesday at Kramden to cleaning, refurbishing and installing software on literally hundreds of used machines.

Community coverage on CaryCitizen is sponsored in part by Hopewell Academy on Preston Executive Drive in Cary.