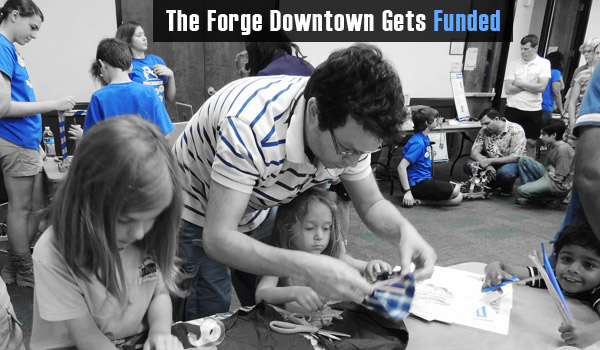 Cary, NC — The Forge Downtown, a project of Wake Robotics, has raised enough money through their Kickstarter campaign to open a location in Downtown Cary.

About a month ago, we wrote about a campaign to help Wake Robotics open a 6500 square foot science space for students in the Sorrell Building at the corner of Harrison and Chatham.

The campaign, hosted on Kickstarter, had the goal of crowd-funding $40,000 in start-up costs by Saturday, June 21.

The campaign exceeded the goal, raising $42,591 from 401 backers (including this publication).

“A HUGE thank you to everyone who helped us with our Kickstarter! We are expecting to receive concept drawings from the architects very soon and can hopefully move through the steps of getting permits and construction underway this summer!”

STEAM is the New STEM

Wake Robotics has a 5 year plan, including big dreams for a robot road race, a maker lab, laser-cut board games, DARPA competitions and more.

You can still support the Forge Downtown and other Wake Robotics activities by visiting the Support page.

To paraphrase Neil Armstrong, “one small step for Wake Robotics. One giant leap for Cary.”

Photo from the blog of Wake Robotics.Education coverage on CaryCitizen is sponsored in part by The Grove School in Cary.

Recipe: Fish on the Grill
Scroll to top