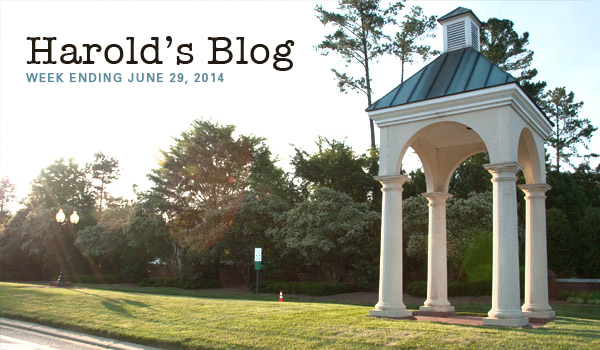 Cary, NC — This was a busy week with a lot of long nights. That makes for a tough week when working full time.

The week started with calls to council members on Monday to hear of concerns or questions about Thursday’s regularly scheduled council meeting agenda. I was able to contact all council members but two. None of them had any major questions or concerns. In my individual calls a couple of council members did relay their thoughts about the Pritchett rezoning on Holly Springs Road at Cary Parkway.

Later in the day I met with management, administration, legal, and others to step through the agenda. I was also informed by legal that we will have three items for closed session on Thursday.

With 10 public hearings, 7 discussion items, and 3 closed session items I predicted it would be a long meeting and last at least until 11:30.

Later Monday I met with the town manager and the deputy town manager for my weekly one on one session. There weren’t a lot of items to talk about so we discussed the current legislature makeup and their decisions. It is my hope that there is enough change this fall to stop the assault on municipalities.

Cary citizens ask more and more from their council yet the legislature continues to strip away our authority to govern ourselves.

Tuesday the council met in closed session for five hours to give annual performance reviews for our three direct reports: the town manager, the town attorney, and the town clerk.

First we met with each employee and discussed the past year. After meeting with all employees the council discussed issues, completed the evaluation forms, and determined their change in salary. The salary changes will begin on July 1st with the new budget.

Wednesday I taped the July episode of Cary Matters with council member Lori Bush. We did one take for each of the three segments and completed the taping in about half an hour. The main topic for the July episode is roads and the maintenance of them. Since we have about 670 miles of roads in Cary I think it is an interesting topic and worth a view.

]The site is located on over 200 acres and is in Apex’s jurisdiction near New Hill. It will serve Cary, Apex and Morrisville’s waste water needs for decades to come. This project started over ten years ago and was projected to cost about $330 million.

I am happy to report that the project will be completed about $30 million under budget and on schedule. This savings is reflected in our utility bills for this upcoming fiscal year.

The facility is state of the art in every way. It uses very few chemicals and runs mostly on natural organisms. In addition, biosolids are created from the solids and will be sold as fertilizer generating revenue for the town.

A future capital project will allow equipment to be added that will use the biosolids to fuel the biosolids dryer which will also save money. Staff is investigating the return on investment for this feature.

The facility will begin taking wastewater in about a week and should be fully operational within a few weeks. The ribbon cutting for the facility is planned for mid-November. During our visit we were presented an overview of the site via a PowerPoint and then walked around to see the various parts of the facility.

Our trip to the site concluded after about three hours.

The meeting started with recognitions and presentations. I read a proclamation recognizing the robotics team from Green Hope High School.

The Public Speaks Out portion of the meeting followed. Most of these speakers talked about the rezoning at Holly Springs Road and Cary Parkway to be voted on later in the meeting.

Ten items were approved on the consent agenda, but the Green Level West Road Widening Project was pulled for discussion at the request of a citizen.

Our first public hearing was on the purchase and development agreement for the Mayton Inn which is proposed for downtown. The town’s tea party group, which in the past has advocated for things like shutting down all sports venues, was present and spoke against the Mayton Inn and the Cary Theater. The town approved the amendment to the purchase and development agreement and construction should hopefully begin soon.

Seven other public hearings were held including rezonings and annexations. Annexations on Penny Road and Carpenter Fire Station Road were approved and the rezonings were sent to the Planning and Zoning Board for their recommendation. The council had eight items for discussion including the $261 million budget which was approved unanimously. We also approved the creation of the Historic Preservation Commission, the creation of the Aging Issues Task Force, and additional funding for the Symphony.

The town tabled the rezoning at Holly Springs Road and Cary Parkway to give the developer one last chance to work with residents. The Green Level West Road widening project was tabled so that a citizen could get more information even though staff stated that they had talked with this individual.

The council meeting concluded after three closed session items around 10:30.

Saturday night my wife and I had the pleasure of traveling to Holly Springs to have dinner with the mayor and his wife. Mayor Sears is a good friend and it is great to spend time with him.

This week’s activities include meetings with the town manager and the town attorney, interviews of town clerk candidates, and the July 4th celebration.

My next post will be on Sunday, July 6th. Although I have Facebook and Twitter accounts those are not the best means of communications with me. Please send all Town of Cary questions or comments to Harold.Weinbrecht@townofcary.org and email personal comments to augustanat@mindspring.com.

Community coverage on CaryCitizen is sponsored in part by NC Quick Pass.