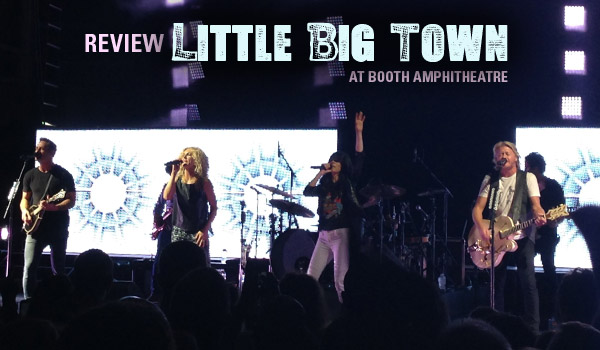 Little Big Town released their music music video for Day Drinking 4 days ago, and the band opened the show with that song.

The band also previewed a few songs from their new album Painkiller, which has not yet been released to the public. The title track sounded like a sweet blend of country and reggae, and the crowd loved it.

Bringing the Party to Cary

Little Big Town knew how to bring the party to Cary with drinking songs like “Pontoon”, and also slow the pace down for an emotional moment with “Your Side of the Bed”.

Other songs from the band’s setlist included fan favorites like “Tornado” and “Little White Church”. Little Big Town united generations with their phenomenal cover of “Never Break The Chain” by Fleetwood Mac.

The night ended with “Boondocks”, the band’s most popular song, and the crowd sung along the entire time.

The Joys of Koka Booth

Seeing one of my favorite country bands in a venue so close to home was a fantastic experience. Little Big Town sounded even better live at Koka Booth Ampitheatre than they do on their studio albums, which was a pleasant surprise. Maybe it’s the woods and the lake.

Keep your ears open for Painkiller when it is released later this year.

Story and photo by Jillian Goodtree, a junior at the University of South Carolina and summer journalism intern at CaryCitizen. Read more stories by CaryCitizen summer interns.

Music coverage on CaryCitizen is sponsored in part by Booth Amphitheatre in Cary.