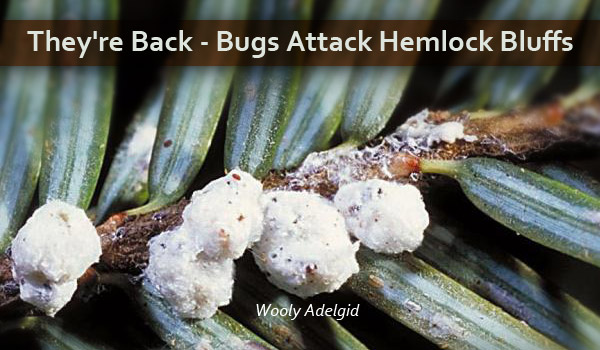 Cary, NC- Several years ago, the hemlocks at Cary’s Hemlock Bluffs Nature Preserve were threatened by an invasive pest. They are called Wooly Adelgids, and they are back.

Despite adhering to a rigorous long-term management plan, third-party inspection has revealed a small but significant return infestation at the Town of Cary’s treasured Hemlock Bluffs Nature Preserve.

The Hemlock Woolly Adelgid, an invasive, non-native aphid-like insect, has impacted a handful of the Preserve’s 235 Eastern Hemlock trees. To battle the bug, the Town will follow the same treatment plan used in 2010 when the Woolly Adelgid was first discovered.

Weather permitting, contractors working on behalf of the Town will use a method called “bark painting” to administer treatment to all 235 trees. Bark painting is a direct application method where bark quickly soaks up the product; it is harmless to healthy Hemlocks. To treat the entire Preserve, it will cost about $7,130.  This is the first sign of the Hemlock Woolly Adelgid at Hemlock Bluffs since 2010.

“Our initial treatment in 2010 kept the bugs at bay twice as long as estimated, and this plan of attack has the potential to be equally successful,” said Mark Johns, Recreation Program Specialist. “Unlike last time, the Preserve, trails and the Stevens Nature Center will remain open during treatment. Observe our experts, then take to your trees for inspection.”

Inspect Your Own Trees

Because Woolly Adelgids are known to migrate from tree to tree and area to area, regular inspection by property owners is critical to managing infestations. While the Town will not host a formal survey, citizens may call Stevens Nature Center for resources and more information on residential tree inspections.

Music: Six String is Back