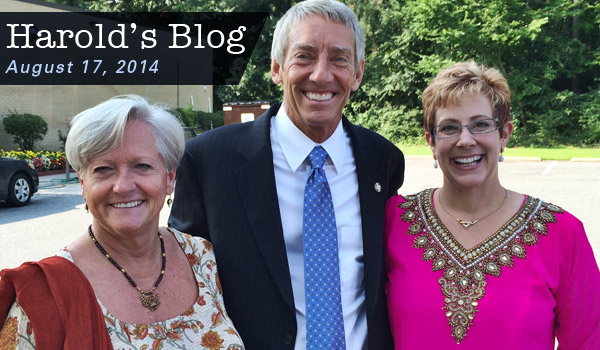 Cary, NC — It was a busy week for the Mayor’s office with groundbreakings, speaking engagements, and a council meeting.

Monday I attempted to call all council members to hear their concerns or questions about Thursday’s regularly scheduled council meeting. While I was only able to get in touch with two on Monday, I did hear from the remainder of the council members by late Tuesday. The items on the agenda that were questioned by council members included:

Later Monday I met with management, administration, legal, and public information to review the agenda along with Mayor Pro-Tem Adcock. After reviewing the agenda and getting feedback from staff, I predicted that the council meeting would end around 9:30 PM on Thursday.

I also met with the town manager and deputy town manager to go over about half a dozen issues. Issues included a wide variety of topics including how to structure our winter retreat.

Tuesday I met with developers and North Carolina Senator Floyd McKissick to talk about a hotel idea in Cary.

What was proposed in concept to me seemed like a good idea for the location. I urged them to go ahead and submit the project for review. The meeting lasted about an hour.

Wednesday started with the groundbreaking of the Mayton Inn in downtown. The process to get to this day took about two and a half years. The groundbreaking was a wonderful event with over 75 people in attendance.

Here are excerpts from talking points that I spoke from:

For years, downtown Cary has been a priority for us as both citizens and Town Council members. We’ve invested millions into projects like our Cary Arts Center and The Cary Theater. We completed streetscape improvements to Chatham Street. This winter we’ll begin an $8 million facelift to South Academy Street from Dry Avenue to Chatham Street. This Community Investment Bond project will be under construction at the same time as our signature downtown park, and together will ultimately serve as a setting for street festivals and other activities designed to continue to attract visitors to our downtown. These revitalizing efforts are important and strategic as we remain committed to our downtown.

Our vision and commitment to downtown Cary is what captured the attention of successful hoteliers Colin and Deanna Crossman, who saw the potential and seized the opportunity to develop the Mayton Inn. The only boutique hotel in Wake County, the Mayton Inn brings $12 million of private investment into our downtown, resulting in a 40-plus room hotel, a restaurant, and meeting and event space. Through this project, the Town is able to preserve two of our historic homes: the Waldo Rood House, behind me, and the Mayton House, currently located on Academy Street next to Ashworth Village.

Colin, Deanna: Thanks for having me here today, and thank you for helping us make downtown Cary a destination. Public-private partnerships are invaluable to our local economy, as are small business entrepreneurs like you both. As with our other downtown merchants, you could have chosen to do business anywhere, but you chose Cary, and for that we thank you. …

I look forward to the ribbon cutting for the Mayton Inn which could be as early as next summer.

Wednesday evening I, along with the entire council, attended the Cary Chamber leadership dinner. This was a time not only to say thank you to leaders representing Cary on all levels of government but also a time to talk with them about issues. In attendance were Congressman Holding, NC State Senators and House members, Wake County commissioners, and Wake County School board members. I was fortunate to have dinner next to Congressman Holding. We talked about many issues. Some were personal in nature but many were not.

One issue we talked about were the new guidelines from the United States Postal Service requiring CBUs (Cluster Mailbox Units). I explained the hardship this was creating to some of our residents. He stated that the home builders had brought this issue to Congress about five months ago. He also said that current regulations might prevent much change. He stated that there might be opportunity for some change in hardship cases.

Congressman Holding was very personable, and I very much enjoyed my time talking with him. I found out that he has three daughters and a young son who keep him very busy. I also found out that he lived close to former Senator Jessie Helms and worked for him.

As is always the case, the Chamber dinner was a great success, and a lot of great conversations took place. It is my hope that relationships built at this dinner will carry over to policies that will continue to help Cary thrive and prosper.

Thursday morning I met with representatives of the developer for the Alston proposal along with Mayor Pro-Tem Adcock and council member Bush. They explained that the site they were proposing for their “Inside Wade type project” would prevent that site from being built as all apartments, which could be done without council approval. They also went over environmental issues on the site that would limit office from being built there. In addition, they showed how the adjacent site still had great potential for class A office.

Thursday’s council meeting was full of difficult decisions. The first tough decision was whether or not to convert a section of North Harrison Avenue from Maynard to Chapel Hill Road into a three lane cross section with bike lanes. Unfortunately the local newspaper misled their readers by reporting that 70% of people surveyed wanted the bike lanes on North Harrison. What they left out of their story was that the survey didn’t mention that Harrison would go from having two lanes both ways to one lane both ways.

I am sure the survey would have had much different results if that crucial fact was included. So much for fair and balanced reporting. Anyway, the majority of the council felt that loosing that much capacity in a congested area on a congested road outweighed the benefits of bike lanes. While I am a big proponent of bike lanes I strongly believe this proposal would have created serious queuing situations possibly resulting in dangerous traffic situations. Therefore I did not support the proposal.

The next tough decision was whether or not to approve a rezoning at Highway 55 and Green Hope School Road. The proposal included 5000 square foot lots with 6 feet of separation between buildings. To me this type of density is ridiculous, and I would have not supported it. If there is a proposal with that small of a lot including that type of separation you might as well have multi-family. During our discussion the developer read the tea leaves and asked to have the item tabled so he could rework the proposal. We will see what the new proposal includes at a future date.

Next was a request of residents to have four way stops along Brookgreen Drive to slow traffic. The town asked residents for their feedback, and most said they would not prefer the stop signs. Council agreed and decided not to make this change.

Our toughest decision of the night was the proposal to allow single family residential to the Alston Activity Center Concept Plan. While this land could be developed as apartments today, most of the council preferred something better. It was also argued that council should redo the overlay so that office would go there. I love office, and I540 and Highway 55 would be a great location for office. However, the developer offered an Inside Wade type product which would still allow office immediately to the south. Inside Wade in Raleigh has a mixture of single family and multi-family units and is located next to office and commercial. In the discussion there were passionate arguments on both sides. Everyone’s arguments were right so there was no great answer. I voted to approve the inclusion of single family units mostly because I knew there was still room for office.

After a closed session our council meeting ended at 9:35.

Saturday I had the honor of joining Attorney General Roy Cooper and Morrisville Mayor Stohlman at an Independence Day celebration for India. Council members Lori Bush and Mayor Pro-Tem Adcock also joined me in this important day for our Indian American citizens. After a short parade the flags of the United States, North Carolina, and India were raised with national anthems and chants of “long live”. Following the flag ceremony the crowd headed to the fellowship hall for activities and more celebratory events.

Emails this week included information about the North Harrison proposal. Most of the emails were against the proposal. Other emails included:

Next week will include a joint meeting of Cary and Morrisville, a meeting of the Capital Area Metropolitan Planning Organization, Lazy Daze, and several private meetings.

My next post will be on Sunday, August 24th. Although I have Facebook and Twitter accounts, those are not the best means of communications with me. Please send all Town of Cary questions or comments to Harold.Weinbrecht@townofcary.org and email personal comments to augustanat@mindspring.com.