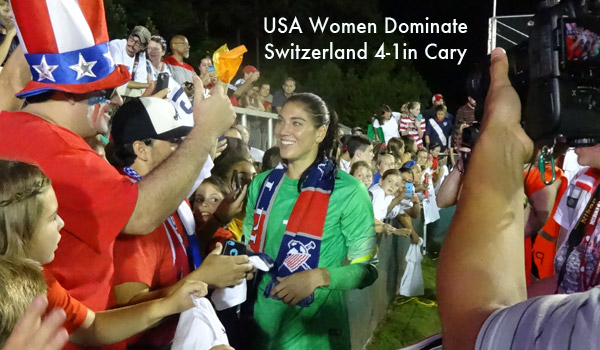 Cary, NC — On a what ended up being a cool summer night at WakeMed Soccer Park in Cary, thanks to threatening incoming storms, the USA Women’s National Team dominated Switzerland (4-1) for over 90 minutes of play.

The attendance set a WakeMed single game record with just 8 people shy of 10,000 witnessing the match.

While Switzerland was clearly outmatched by the top ranked American team, Switzerland was more physical, picking up a handful of yellow cards and forcing two USA penalty shots that lead to scores.

For the US, it was a true team effort with scores by Megan Rapinoe, Carli Lloyd, Christen Press and Abby Wambach.  Rapinoe struggled with several possessions early in the game but was clearly key in the win with a score, and two important set-ups that led to goals.

Switzerland’s goal came on a penalty kick because of an inadvertent hand ball by Rapinoe in the box.  Switzerland and the USA have qualified for the FIFA Women’s World Cup in Canada in October. 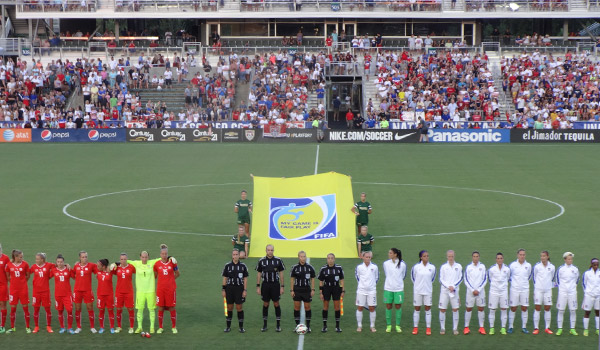 While she didn’t make the scoring stat sheet, every soccer fan needs to keep an eye on new defensive back Crystal Dunn.  Clearly the fastest player on the field, she made smart play after smart play – keeping possessions, setting up plays or providing key turnovers in the favor of the U.S. team.

Dunn was a standout player at UNC-CH and the very first ACC player chosen in the pro draft by the Washington Spirit this year.

The match of course had that great family feel that soccer at WakeMed always brings to the table. The enthusiastic cheerleading from the hundreds of members of the “American Outlaws” behind the goal by the big screen has got to be mentioned.

As always, there was  a huge contingent of kids, especially girls, wearing either their own teams’ unis, or sporting their heros’ jerseys.

Biggest fan favorite was clearly Hope Solo who obliged hundreds of adoring fans with autographs and selfies after the game.

US WNT Training in Cary

US Soccer posted a great video of the Women’s National Team training in Cary on Wednesday.