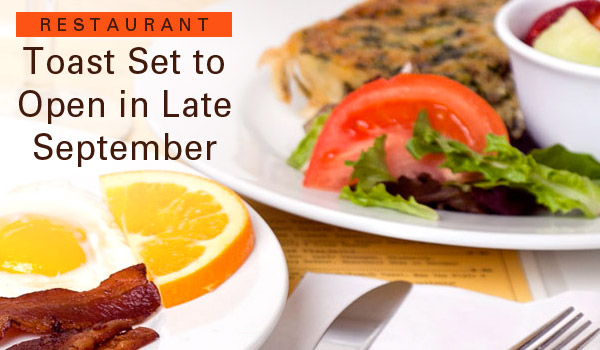 Cary, NC — The husband and wife team of Dean and Beth Kessel have moved from Charlotte to open Toast in Waverly Place, an upscale restaurant concept that will offer breakfast all-day and includes a full service bar.

CaryCitizen spoke with Dean and asked him how he decided to open in Cary.

A Passion For the Restaurant Business

He first told me a little bit about his background that includes many years in food and sports marketing, two seemingly divergent backgrounds.

His first job while in college was to work for a ribs restaurant called Dreamland while attending the University of Alabama. He had a knack for what the area wanted and was soon selling out catered orders of ribs on game day.

Marketing and The Speedway

After four years of slinging ribs, he then worked on the tie-in for Lowe’s Home Improvement and cars/drivers at the Charlotte Motor Speedway. When he started, Lowe’s was hardly the household name it is today. He enjoyed working in the field of sports marketing and brand tie-ins with the cars. He later brokered sports marketing deals for Sprint-Nextel.

It was while living in the Charlotte and working with Speedway, that Dean and Beth came across a little restaurant they loved called Toast. The place was near his office and almost every week he found himself eating there.

Looking for The Next Chapter

Last year, he and his wife were looking to transition into a new chapter and began thinking of buying a business. That was right about the time Toast started to offer franchise opportunities. They looked over the books and liked what they saw. They especially liked that the menu was narrow and deep, with only a breakfast/ lunch focus. The hours weren’t too bad either, closing after 3:00pm most days. Ideal for raising a family.

So they approached the two owners of the corporation and asked about opening in the Triangle (there are already three in the Charlotte area). The owners did want to bring the concept to this side of North Carolina. The Kessels then started looking at Durham and Chapel Hill. An ideal location is one near a Whole Foods, a Fresh Market or Trader Joe’s.  Cary has all three.

The Menu at Toast

Dean believes Toast offers a premium product. This is not your typical diner, or breakfast 24/7 concept. Everything is made from scratch daily, with prep in the kitchen beginning at 5:00am. Unlike the “fast casual concepts” that are becoming so popular with a cafeteria style check-out and meals later brought to the table, Toast will offer full waiter service for dining.

Look for eggs served the way you want them, including an “Eggs Benedict” ver easy, soft boiled, poached, over hard, or sunny-side-up. You’ll get them that way and more. Like something from the griddle? Try some pancakes, waffles, hash browns, and burritos. Everything that is on the menu is offered every day, all day. Lunch items include wraps, quiches and veggie burgers, melts and salads.

There’s also that full bar I mentioned earlier. Like a Bloody Mary with those eggs? How about a fresh squeezed mimosa? Toast has you covered.

The restaurant will be offering gluten-free items along with vegetarian options.

The Kessels are in the midst of whirlwind of hiring and has received hundreds of applications. . The restaurant will employ approximately 25 full and part-time staff. And lucky for them, three of the current summer staff in Charlotte attend NC State. Others who have been hired here in Cary have been undergoing their training in Charlotte. These seasoned pros will be on hand right from the day Toast opens its doors in late September.

The Cary Scavenger Hunt: What Do You Win?
Scroll to top