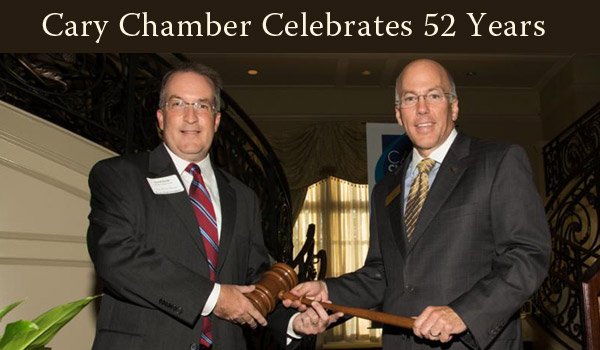 Passing of the gavel – David Booth and Frank Shel.

Secretary Decker announced that the new Economic Development Partnership of North Carolina will be headquartered at 15000 Weston Parkway in Cary. This is the newly privatized segment of the Department of Commerce that will be responsible for all of the marketing and recruitment for the entire state.

This annual event is one of the highlights for its chamber members and included the passing of the gavel from Board Chair, Frank Shell of NewBridge Bank to incoming Board Chair, David Booth of Wells Fargo Bank.

Ambassador of the Year

Business of the Year – Umstead

The Umstead Hotel & Spa was the recipient of the Business of the Year Award, which was accepted by General Manager Jim Beley. This award is presented to a company or leader who has made outstanding contributions to both the community and the Chamber and has been at the forefront of their profession.

Citizen of the Year – Jennifer Robinson

Finally, Jennifer Robinson, Cary Town Council Member and advocate for non-profits and community organizations, was awarded the Citizen of the Year. Jennifer has served on the council since 1999 and has continuously strived to make Cary the best place it can be.

Each year the Annual Banquet is a time to reflect on the past year and to present the challenges for the upcoming year. The incoming and outgoing board members were also recognized – including those retiring from the board: Carrie Cassidy – The Umstead Hotel & Spa, Kathy Burns – Burns & Bynum, CPA; Becca Smith – Smith & Smith CPA, Brian Reid – Paragon Bank, Steve Zaytoun – Zaytoun & Associates, and Diane Rupprecht – The Sunrock Group.

Story and photo from the Cary Chamber of Commerce.

Business coverage on CaryCitizen is sponsored in part by Whisk of Cary.