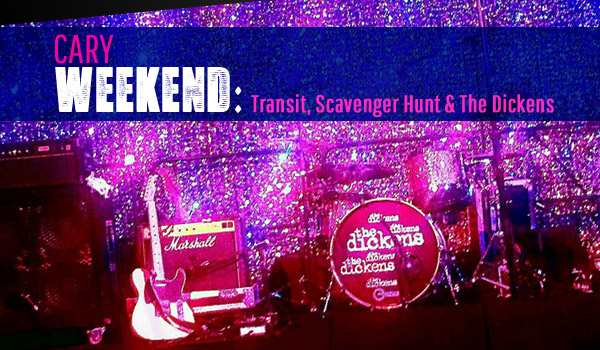 On Thursday morning, the Morrisville Chamber will host a Transit Forum at 8 AM. Durham and Orange Counties have passed transit bonds, but Wake voters have yet to be afforded the opportunity to express their will. David King and Deborah Ross will be on hand from Triangle Transit. Members: $10; Non-Members 20. Registration.

The Citizen Diplomacy Summit, presented by Sister Cities of Cary, will run from 7-9 PM at the Cary Theater downtown.

Also Thursday, party band The Dickens will take the stage at Park West, part of the Harvest Nights concert series.

More Thursday details on the Calendar.

On Friday, Tea Cup Gin will bring their eclectic mix of jazz, blues and show tunes to the Downtown Performance Green in Cary from 7-9 PM.

Also Friday, It’s Raining Cats & Dogs, a concert by the Cary Town Band, will celebrate our favorites pets from 7:30-8:30 at Sertoma Amphitheatre in Bond Park.

More Friday details on the Calendar.

Saturday is the 5th Annual Cary Scavenger Hunt. First prize is a trophy cup stuffed with $250 in cash. Think you know Cary? It’s not too late to register.

More Saturday details on the Calendar.

This weekend, SparkCon takes to the streets in Raleigh. Zappa Plays Zappa is at the Lincoln Theater in Raleigh on Friday night and the Durham Bulls play the PawSox Friday and Saturday (if necessary) in the International League Governor’s Cup.

The CaryCitizen Calendar of Events is edited by Lindsey Chester.