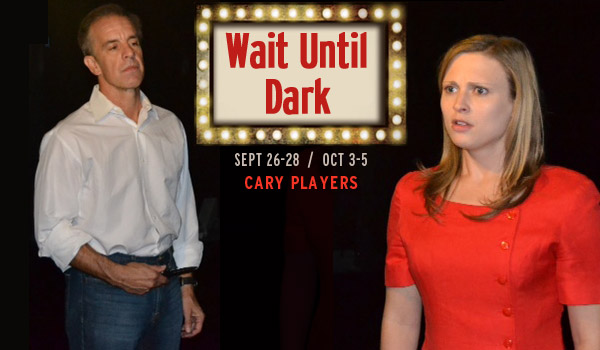 Cary, NC- Audiences will be on the edge of their seats as Cary Players opens its 13th season with Frederick Knott’s spine-tingling drama, Wait until Dark.

Wait Until Dark first appeared on Broadway in 1966 starring Lee Remick in the leading role of Susy Hendrix, a blind New York City housewife who is threatened by three evil con-men in search of drugs they believe were inadvertently hidden in her apartment. Movie audiences may recall Audrey Hepburn in the film version of the story.  Cary Players is delighted to have Kirsten Ehlert, an award-winning triangle actress, in the role the vulnerable, yet resourceful Susy. Veteran performer Larry Evans takes on the role of Roat, a relentless villain and leader of the gang who meet their match with the quick-thinking Susy.

Tina Vance has designed an elaborate unit set featuring a Greenwich Village basement apartment, which will be filled with creative props crafted by Wil Deedler. Rachel McKay is designing the costumes, and Hair and Make-Up is under the direction of Ali Short-Stroh.  Designer, Liz Dressler will light (and darken) the stage!

The Cary Players have an extensive season planned included a return of It’s A Wonderful Life in December, Love Bits and Bites back by popular demand at the Page-Walker for two weekends in February and the musical Legally Blonde will conclude the season in April.

The matinee on October 5th will be Audio Described by Arts Access for the visually impaired.