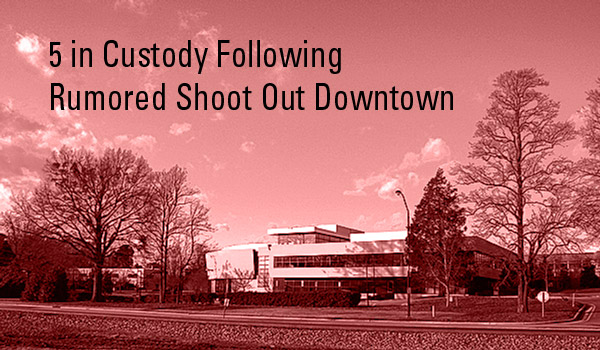 Cary, NC — Cary Police are still trying to piece together the facts, but five individuals are custody following a reported shoot out this afternoon in downtown Cary.

According to news reports, individuals in two cars exchanged gunfire near the corner of Park St. and Harrison Avenue in downtown Cary around 2:30 this afternoon

One or both of cars then crashed near Town Hall campus, home to the Cary Police Department.

Five people were taken into police custody Thursday afternoon after reports of shots being fired between two vehicles that crashed outside Cary Town Hall. – WRAL

Police said the incident ended on North Academy Street near the police station when one of the vehicles crashed. – TWC News

Five people were taken into custody and no injuries have been reported.

Cary Town Hall was also briefly placed on a lockdown.

The details of the incident are being investigated. Town of Cary released the following statement:

Please note that while five people have been taken into custody while police investigate the incident in downtown Cary ending at 316 N. Academy Street that occurred at 2:30 p.m. today, no arrests have been made. Being taken into custody does not necessary result in an arrest with charges.

And while police received reports of shots having been fired, officials continue to work to confirm those reports.

Thursday evening, the following info was released by Town of Cary:

CARY, NC – Town of Cary Police have arrested two young men in relation to a shooting earlier today in downtown Cary. Chase Austin McKiley, 18, of Horizon Lane, Raleigh and Nicholas Scott Jenkins, 21, of Sawyer Drive, Raleigh are each charged with Assault with a Deadly Weapon with Intent to Kill and Attempted First Degree Murder, penalties that carry up to 32.75 years in jail. Both are currently being held at the Wake County Public Safety Center in Raleigh.

Around 2:30 p.m. on September 18, Town of Cary police received reports of gunfire involving two vehicles, a 2009 Black Infiniti and a 1994 primer gray Honda Civic, driving along Park Street in downtown Cary. Both vehicles were driven to Cary Town Hall Campus, 316 N. Academy Street and home of the Cary Police Department, where one driver abandoned and ran from his vehicle. Within minutes, police had five subjects in custody for questioning and a handgun was recovered from one of the vehicles. No injuries were reported. Cary Town Hall Campus was on lockdown for roughly 10 minutes.

“At this point, we believe the incident is related to a drug deal,” said Capt. Randall Rhyne.

Additionally and in accordance with State public records laws, the Town of Cary is releasing the 911 calls associated with the incident. Five calls were made to the Town of Cary Communications Center.