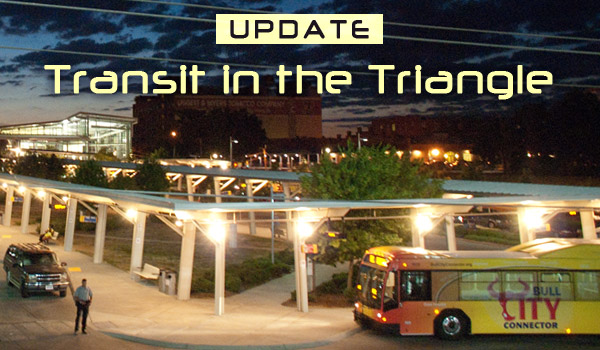 Morrisville, NC — Triangle Transit CEO, David King, recently spoke at the Morrisville Chamber to give the audience an update on how the Triangle is doing with regard to mass transit. The region’s population is expected to double by adding another  1.3 million people over the next 20 years. It’s safe to say, “We are behind” when it comes to mass transit planning. Triangle Transit oversees transportation issues for three counties including Durham, Wake and Orange. They are a regional organization charged with planning for the region’s transit problems. They don’t yet cover Johnston County, but maybe that’s only a matter of time. The Triangle Transit organization looks at heavy transit routes and begins to make plans for whether rail, bus, carpool lanes or van pools are the answer depending on roads and availability of existing services.

Only Durham and Orange have already passed a 1/2 cent sales tax to help pay for future transit needs. That plan includes 17 miles of light rail with 17 stations. It will connect NCCU, Duke, Duke Hospital, Downtown Durham, UNC-CH, and UNC Hospital. The plan was put to the voters and approved by over 69%.

Wake Commissioners are just now ready to take up the issue of mass transit planning and are expected to hire a consulting firm within the next few weeks to begin a new Wake County plan. A draft plan is hopefully to be issued in March of 2015. That will include Wake County, Triangle Transit, Capital Metro Planning, the City of Raleigh, Town of Cary, NC State, RDU and RTP.

One fact that needs to be emphasized, according to King, is that where transit hubs are created, economic development follows. Hubs interest developers, who then build housing and shopping , and they can greatly re-energize an area, especially poor quality, under-utilized downtown areas. King went on to point out how the light rail in both Charlotte and Atlanta have renovated former brownfield areas and turned them into upscale development.

There is not “one fix” to our traffic/ transit woes, and some situations will call for an innovative approach. One such idea has been allowing buses to ride on the shoulders of highways and interstates. there are already 25 miles of these in North Carolina and in 2 years there have been no safety issues. Express buses are another solution. They have added apps to allow passengers to feel less stressed about the arrival of their bus, which can see the route in real time.

One of the key threads for the new Wake County transit plan will be to identify key corridors, and assess demand. There will be a focus on bus frequency. Our bus service  ridership “is near the bottom” for use and service. Rail service is in the mix with hopes of a Wake-Durham commuter rail line that will include two stations in Garner, Downtown Raleigh, NC State, 2 stops already planned in RTP, a west Raleigh stop, Cary Downtown, Mc Crimmon in Morrisville, Downtown Durham and West Durham. This proposed line would cover over 37 miles. The plan is to partner with Norfolk Southern who owns the corridor.

Even with plans underway, it takes years to purchase right of ways, make routes, and for rail to be built. Even if a tax is approved by voters, it takes a year before the fund start to be collected. King asserted that light rail takes at least a decade to be built. And by then the Triangle will have added half of those 1.3 million people. All driving their cars to and from work.

A recent report from Wake Up! Wake notes that

Wake County Commissioners have the opportunity to plan for the future growth of this area, and get it right. We may be behind in our planning for our area’s huge growth, but that shouldn’t mean our officials do nothing. The quality of life that brings so many people here in the first place will suffer if we do not adequately plan for our future.