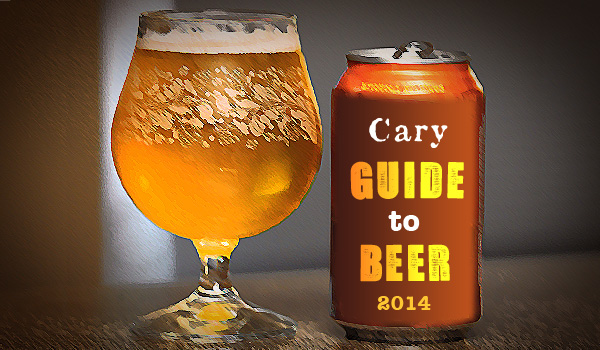 Cary, NC — Bring on the Beer! There are over 16 microbreweries right here in the Triangle with more in the works. Across Cary, we’ve scoped out 20 places to sample the suds for the 2014 Guide to Beer.

More breweries mean more beer options, thus local restaurant and bar owners have difficult choices to make. For many people, beer selection is a deciding factor when going out for a drink or for a meal. I tend to seek out places that offer local beers on tap, several styles, seasonal selections, and reasonable prices.

Fortunately, restaurants keep improving their beer menus therefore wherever you go for dinner you are bound to find a good craft beer. The following are my favorite beer havens in or near Cary.

Guide to Beer in Cary

At long last, Cary has it’s own brewery. Fortnight brews English style ales, porter and ESB. Brewery and pub located on the corner of Maynard and West Chatham.

Although the name may deceive you, Triangle Wine Company (TWC) also specializes in beer. TWC has thousands of bottles of wine and beer in addition to a bar with 20 taps and wine by the glass. The beer list is always changing but consistently has a wide array of beer styles from India pale ales to sours. Assistant Manager, Tom Plourde says that there is “something for the most seasoned beer nerd to drink as well as something for the person who usually only drinks Budweiser.”

Every Friday, TWC has beer events typically involving a tap takeover by one brewery. Some of the events during September and October include:

TWC is a great place to go to expand your palate and try new styles of beer. The staff is available to answer any questions, and if you enjoy a specific beer at the bar, you can find a similar bottle to take home.

Tyler’s boasts a whopping 80 beers on draft, listed according to style in the “beer bible”. The first pages of the menu are dedicated to seasonal and specialty beers from all over the world. There is a section for North Carolina beers with seven from the local area.

The brewery of the month for September is Green Flash Brewing followed by Founders Brewing Company in November. Also notable in November is the celebration of International Stout day on the 8th

– a huge event featuring a wide variety of many rare and vintage stouts.

In the back bar of Tyler’s there are sometimes other specials on the chalk board, but they are decided on a daily basis. If you are a new beer drinker then the “beer bible” can be a bit intimidating. Any server or bartender should be able to tell you a beer that is similar to what you normally drink. You can also order a flight which allows you to try two ounce pours of four different beers.

The Cary Carolina Ale House upgraded their draft system in December of 2012 as the first location in a company-wide initiative to increase focus on craft beer. There are now 72 beers on tap with 30% dedicated to local and craft beers. About 10 of the taps are continuously rotated in order to accommodate some seasonal beers. There are no really unique beers, but the Ale House definitely gets the award for most improved beer line-up.

Each day of the week there are beer specials at the Ale House.

Rally Point (RP) recently doubled their beer selection due to consumer demand for more craft beers. Compared to last year, RP’s beer sales are up 30%- a clear sign that customers are happy with the change. The staff is prepared for the influx of beer nerds as they all now have their Cicerone Beer Server Certifications.

Owner, Drew Schenck, will also be brewing a beer in collaboration with Larry Lane of Double Barley Brewing Company. The beer will be brewed in October and served at the restaurant when it’s ready.

There are 21 draft beers with about half from North Carolina. Mellow Mushroom currently has Boulder Brewery’s “Shake” chocolate porter on draft, which I highly recommend trying before it’s gone.

The newest Ruckus location is home to 20 beers on draft, and all but two of them are craft beers. Ruckus is frequently giving back to the community by hosting events, benefiting nonprofit organizations. The restaurant also partners with breweries to offer beer dinners where each course is paired with a specific beer. The next beer dinner is October 20, and the brewery is Oskar Blues.

Spirits is a quaint, little neighborhood restaurant where you can sit at the bar and enjoy a cold beer. The beer menu is primarily local and North Carolina brews, and includes 21 drafts in total. If you go to Spirits on a Thursday, all drafts are only $3.50.

Craft beer is everywhere on tap in Cary including Doherty’s (best poured Guinness in town), Hiberian on Kildare Farm Road and at West Park Tavern, which lists 13 craft brews on the menu including Shotgun Betty, Angry Angel and Bad Penny, all from the Triangle.

The Corner Tavern at Maynard Crossing has NC Drafts for $3.75 on Tuesdays. As of this writing, Abbey Road has 11 craft beers on the menu. UnVined has 13 craft brews listed, including two that are gluten free.

Tribeca Tavern in Stonecreek offers beers from the Mash House in Fayetteville, one of NC’s first micro breweries. They also have about a dozen crafts on tap, most from North Carolina. Woody’s has a couple crafts on tap, specials on Wednesday and an impressive collection of bottled beer. Mac’s Tavern lists 16 beers on tap including Great Lakes Brewing Company.

New on the Scene

World of Beer in Cary held its grand opening on September 1st 500 bottles from around the world, spirits, pub-style food and 19 flat screen televisions. There is a local beer presence with Fullsteam, Lonerider, Big Boss, and other on tap. Currently, there will be a select craft draft special on Saturdays and Sundays for $3. Each Thursday night is a Tap Takeover, where one brewery will have at least three or four different styles of beer on tap. Next up is Goose Island Brewery on September 18.

Blackfinn Ameripub opened in Park West Village on Thursday, September 4th has 36 beers on tap, but many are domestic. There are a few locals including Cary’s own Fortnight Brewery. Beer can be purchased in little nine ounce glasses, pints, logo growlers (64 ounces), and towers (92 ounces). Beer specials will be available, but the specifics are still being determined. Plans are also in the works for two beer dinners- Sam Adams in October and a Fortnight in November. Blackfinn is intent on pleasing customers and are all ears when it comes to preferred beers.

HighCraft Beer Market will be Cary’s first craft beer and bottle shop when it opens this fall. Matt Ganzart, the shop’s owner, plans to have over 800 bottles of beer and 12 draft beers for on-site consumption and to fill growlers. Draft beers will be a mix from North Carolina, US, and worldwide breweries. It is Ganzart’s goal for customers to have fun drinking a pint while learning about the elements and styles of craft beer. Customers can meet a friend for a drink or make their own six-pack to take home. If you’re not sure what you want or what a specific beer tastes like, you are welcome to sample any beer on tap. Ganzart is excited about the Triangle’s beer scene, and happy to be able to work in partnership and support local breweries.

If you have stepped foot into the craft beer world, there is no turning back. Ha ha ha (maniacal laugh). Each beer is different and even the same beer can differ from one batch to the next. Take the time to explore the burgeoning Cary beer scene. Make note of what you like and don’t like and don’t be afraid to try new beers.

The partners will open soon ( no date yet set at this publishing) in Cary’s Waverly Place beside Whole Foods Market on the lower level. This will be the business’ third location (the other being in Pinehurst).

The Pharmacy Bottle Company (or similar name TBD) is hoping to open by December next door the The Cary Theater on Chatham Street in Downtown Cary. The space will be leased from the Town of Cary in what used to be the old Mitchell’s Pharmacy. No details yet available.

The CaryCitizen Guide to Beer was sponsored in part by HighCraft Beer Market, Blackfinn Ameripub and Rally Point Sport Grill.