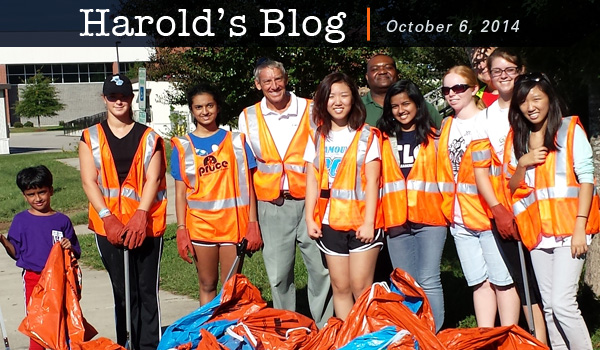 Cary, NC — This week started on a sad note with the memorial service of former town manager Bill Coleman which was held at Greenwood Forest Baptist Church. The sanctuary was full of his family, lifelong friends, retired town employees, and current town employees. During the service several people delivered a eulogy including his son Ben and council member Jack Smith. It was a very nice service for a great public servant. Rest in peace Bill Coleman.

Monday afternoon I was scheduled to meet with the town manager but neither of us had any pressing issues to discuss so we cancelled the meeting.

Tuesday I joined Mayor Pro-Tem Adcock and council members Bush, Yerha, and Smith to thank our board and commission members for their service. First the chairman of the each of the boards gave a review of what the board was working on. Afterwards I gave welcoming remarks before dinner. After dinner lawyers from the UNC School of Government held a quick educational session using a fictional board member’s actions. We all discussed the actions and commented on the appropriateness of those actions. After the lawyers’ session I gave a 15 minutes PowerPoint of what is going on in Cary with topics that included development, jobs, crime, schools, and the Imagine Cary Planning process. The town manager followed me with a brief talk about what is going on with the town staff’s reorganization which started at the beginning of the year.

A big thanks to all of our current and former advisory board members. We are blessed to have so many citizens willing to give their time, talents, and expertise for the betterment of their town. Their efforts are one of the reasons Cary is one of the greatest places to live, work, run a business, play, and raise a family.

Wednesday I met with an individual who wanted to discuss why Chapel Hill Road is planned for 6 lanes and why stormwater BMPs are not allowed in the 100 foot stream buffers. Our meeting lasted about one hour.

Friday I had the pleasure to attend the homecoming celebration for Green Hope High School. They are a school recognized statewide for athletic and academic excellence. A representative Wells Fargo was there to congratulate them on winning the Wells Fargo Cup five years in a row. Since 1979 the Cup has gone to the schools which have the best overall interscholastic sports programs. I gave a few words of welcome and afterwards mingled with the folks in attendance. It was a good time and a lot of fun.

Saturday morning I attended the fall annual litter sweep for the Town of Cary which is part of the SPRUCE program. My group picked up litter on McCrimmon Parkway near Panther Creek High School. In my group were students from the junior class attending Panther Creek High School. Nothing very unusual found in this sweep but it was fun. If you would like to get involved in SPRUCE contact us the Town of Cary. You can find out more at http://www.townofcary.org/Departments/publicworks/Spruce.htm.

Later Saturday I attended a celebration for Dorcas ministries and provided a few welcoming remarks. The celebration was to recognize their 3rd year at the Maynard Road and High House location. They continue to grow and expand their ministry. In addition to providing affordable clothing, they provided $5000 in utility assistance, $23,000 in recreational program scholarships, and distributed over 700 pounds of food during last year’s holiday season. I invite everyone to clean out their closets and volunteer their time to this great cause.

Saturday evening I had the pleasure of attending the opening of the T.MAC restaurant in Cary. Although this is a chain, the closest one is in Charlotte. If you like the bar type atmosphere, dozens of beer on tap, and enough TVs to show every game being played, then this is the place for you. And the food is great too! Since this is close to my house I look forward to frequenting this establishment often.

US Postal Service in Cary

This week I received a letter from Senator Burr’s office who contacted the US Postal Service on behalf of Cary. The US Postal Service has eliminated mailboxes on properties of new homes and now requires developers to provide cluster mailboxes. Their justification this change is strictly based on cost with little or no regard to the US citizens they serve:

Personally, I would gladly give up Saturday delivery so that everyone would have mail delivered to their mailbox. I fear this is the beginning of the end for the US postal Service.

In emails from staff the downtown manager notified council that there will be a new restaurant possibly by mid-December in the Café 121 spot. It will be called the Crosstown Pub & Grill and you can find out about them at https://www.facebook.com/pages/Crosstown-Pub-Grill/1485267121731506.

We were also notified that interior demolition has begun on the former Mitchell Pharmacy building to prepare for Pharmacy Bottle & Beverage, which is the name of the craft beer store council approved to lease this space. Four layers of drop ceiling have been removed to uncover a terrific original wood ceiling with two exposed steel beams running the length of the building. They are scheduled to be open in early to mid-December.

Emails from citizens this week included dozens from people wanting the Cary mayor to do something about the RDU Board not renewing the lease for trails to Lake Crabtree Park which is a county park. Unfortunately, this is not a town decision and we have no representation on the board. Although I have expressed my concern in the past via letter to the authority about development in this sensitive area, it remains to be seen if they will honor our requests.

Other emails from citizens included a concern about the growth rate (which has been around 3% since I have been mayor) and a comment about Google fiber.

This week will be dominated by SAS Championship events. I will be playing in the Pro-Am and taping a commercial inviting everyone to visit Cary and the surrounding area. In addition to the SAS Championship I have a couple of private meetings.

Well, that is all for this week. My next post will be on Sunday, October 12th. Although I have Facebook and Twitter accounts those are not the best means of communications with me. Please send all Town of Cary questions or comments to Harold.Weinbrecht@townofcary.org and email personal comments to augustanat@mindspring.com.

Road to Green Hope Could Reopen Next Week
Scroll to top