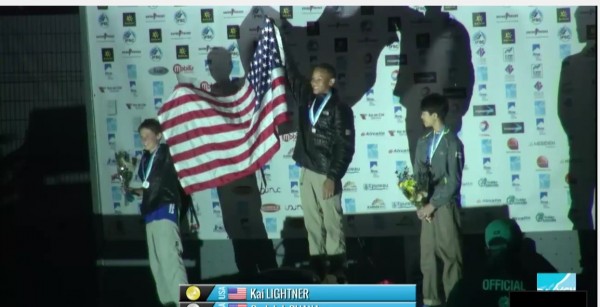 Kai Lightner at the awards ceremony in New Caledonia where he won the world youth championship.

Morrisville, NC — Not many 15-year-olds have the opportunity to claim the title of a World Champion, but on Sunday, Triangle Rock Club (TRC) climber Kai Lightner was able to do just that. After competing alongside of 39 climbers between the ages of 14 and 15 during the International Federation of Sport Climbing (IFSC) World Youth Championships, Lightner took the gold and was named the Youth B Lead Climbing World Champion.

“Since I was 10-years-old, I have had the goal of standing on top of the podium at an IFSC World championship competition,” Lightner said, “With climbing, you always have your good and bad days, and sometimes it felt like reaching my goal would be impossible, [but my team] never let me stop believing in myself. I still can’t believe that I am really a World Champion!”

Lightner is no stranger to the IFSC World Youth Championships. In August of 2013, he competed in his first IFSC Youth World Championship and placed fourth in his age category.

“He should be more intimidated than he is,” Lightner’s mother, Connie, said during a recent Outdoor Magazine interview. “Every competition he enters, he wants to win… [Worlds is] no different!”

A Fayetteville resident who practices weekly at Triangle Rock Club’s triangle-area facilities, Lightner is looking forward to having TRC closer to home come early fall, when Triangle Rock Club- Fayetteville opens its doors. “I love my TRC family and I appreciate [them] always being there and believing in me, especially during times when I doubted myself,” Lightner said.

Lightner is set to return stateside early next week and his Triangle Rock Club teammates and coaches are looking forward to celebrating his victory.

“We are all amazed, proud, excited, and happy for Kai to have taken a gold medal at World’s,” Team TRC’s Head Coach Alex Neighbors said. “He’s an incredibly talented climber with an outstanding personality and work ethic, and we could not be more pleased to have him representing our team, our country and youth climbing on a world stage.”