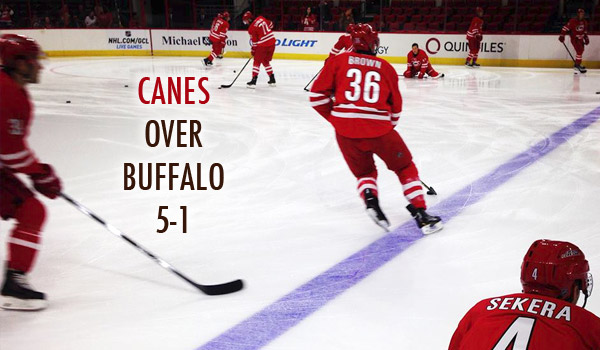 Raleigh, NC — The Canes had it all going their way in a fun game to watch with a 5-1 win against the Buffalo Sabres at the PNC Arena Friday October 3.  Elias Lindholm had his first professional hat trick with Nathan Gerbe and Jeff Skinner providing the other scores.

For the first time this preseason, the Canes had what may be the line up for Opening Night, this Friday Oct 10.

One of the two biggest surprises is the impressive performance by the 21-year-old Victor Rask.  Rask has had a preseason that is reminiscent of Skinner’s rookie season. While just 18, Skinner played so well in the preseason he earned a spot and of course went on to win Rookie of the Year honors. New Coach Bill Peters said Rask has done all the right things and is one of those hockey-smart-Swedes.

If every player gave the effort LaRose does every shift, the talk wouldn’t be if the Canes make the playoffs but will they win their division or the Stanley Cup.

Rosey is like a waterbug—full of energy going everywhere on the ice. He’s a great teammate and usually a major contributor to the locker room environment and music selection.  Pat Dwyer is out with a lower body injury so LaRose is in taking his spot.

Unfortunately LaRose’s first game to impress Peters lasted only 68 seconds.  On only his second shift, LaRose did a dump and chase at the blue line sending the puck behind the Buffalo goal.

In his zeal to get the puck, make a check and get the crowd into the game early, LaRose got a 5 minute major and game misconduct for boarding.  The Canes defense looked absolutely outstanding for the 5 minute penalty with the Sabres only getting 2 shots on net.  One shot tested Cam Ward, who made a vintage butterfly pad save.

Whether it is the new coach or Rod Brind’Amour’s private lessons, who cares, but Alex Semin’s defense in front of Ward was a welcomed sight.

Semin is a magician with his stick, stole the puck then went full speed up the right wing. Nathan Gerbe joined on the left for a 2-on-1.  Semin fed a perfect saucer pass right to Gerbe’s tape who sent in a nice tip-in to the top left corner.

Early in the second, with the Canes on a powerplay, Andrea Skera had his shot from the blue line blocked, but Lindholm was quick on the puck and sent one to the back of the net for a 2-0 Cane lead.

The line of Lindlholm-Skinner-Rask is absolutely fun to watch.  They’re fast, all skilled and tenacious around the puck.  Skins was one of the forwards doing double shifts due to the LaRose ejection and was on a line with Gerbe and Riley Nash that was equally fun to watch as Skins other line. Skinner crossed the blue line sending the puck deep. Gerbe out skated his defender to the puck then sent a behind the back pass to Skins who was in the mid slot area for a no-look one timer surprising Sabre goalie Michal Neuvirth with his accuracy for a 3-0 Can lead.

Late in the period, Lindholm brought the puck in the offensive zone with good speed.  As the defense was closing in on him, Lindholm sent one high glove side for his second goal of the game.

The Sabres pulled their goalie with just under 5 minutes remaining to give a sixth attacker in the Canes end.   Neuvirth came back out when there was a faceoff but went to the bench again after Buffalo got possession.

With just under 4 minutes left, Justin Faulk passed to Lindholm on the right.  As Lindholm skated past the Canes bench, there were several players telling him to shoot.  Just before Lindholm got to the red line, he calmly sent a soft shot that made it in just inside the left post to seal the game.  Ward’s shut out was foiled by Jake McCabe’s powerplay goal in the second period.

Overall one of the best games to watch for a Canes fan, beating Buffalo was a bonus.  It is still preseason but the win was badly needed.

Opening night is this Friday Oct 10th.  A few seats are still available and everyone will receive a Canes scarf at the gate.

Transportation: Me & My Elf