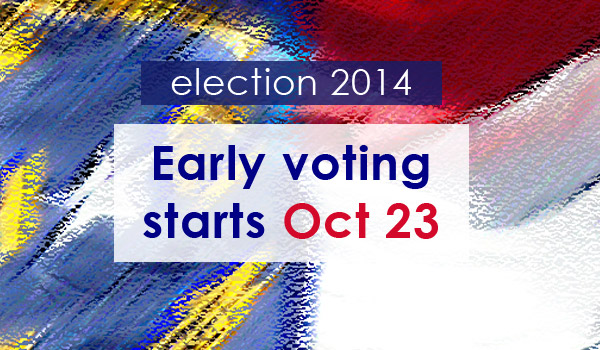 Cary, NC — The road signs are popping up like dandelions. The election is just 3 weeks away. Here’s info on Early Voting in Cary, which starts on October 23, 2014.

An Important Election. To 15% of the People.

Off-year elections, so-called because the presidency is not up for grabs, generally draw about 15% voter turnout.

But there are some important issues on the ballot this year and candidates with starkly different points of view. Education, taxes, voting, healthcare, marriage and education top the long list of election issues in North Carolina this year.

But, perhaps most importantly for local citizens, a whole slate of seats are up for grabs on the Wake County Board of Commissioners. County commissioners spend a hefty chunk of your tax dollars, and directly impact your everyday life.

Facebook and Twitter are alive with opinions about the big issues of today. Wouldn’t it be great if half those people showed up at the polls?

Now is the time to put the election date on your calendar:

And, early voting starts in Cary on October 23.

You can also vote early at the following locations in Apex and Raleigh:

As we have in the past, CaryCitizen will publishing responses to our Candidate Questionnaire. It’s a chance for the candidates to answer three simple questions in their own words without any filtering or distortion from the media:

We reached out to all the candidates but only heard back from a few. If you are a candidate for office representing Cary and would like to participate in our Candidate Questionnaire, please email questionnaire@carycitizen.com.