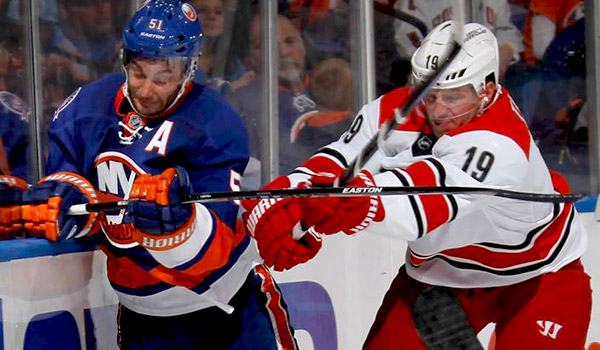 Raleigh, NC — The 2014-15 Carolina Hurricanes have a new coach, new General Manager, a few new players and even the PNC Arena has new lighting, but the Canes’ old way of losing their home opener reared its ugly head again as the Canes fell to the much improved NY Islanders, 5-3.

The sellout crowd was loud, ready for hockey to begin again and wasn’t disappointed early as the Canes dominated the early play quickly having a 6-1 shot advantage.

The Canes had a powerplay early that didn’t score but did generate 3 good shot and many oohs and ahs from the Caniacs. The Canes moved the puck, moved to open spaces, beat defensemen to the loose puck, and crashed the net.  This was a huge difference from powerplays of old and expect better results this season.

Late in the period the Canes dug a big hole.  Brad Malone got called for holding then Jay Harrison went to the sin bin after a high stick giving the Islanders a 5 on 3.

John Tavares showed why he is one of the super elite players in the league as his set up passing was outstanding.  Early in the 5 on 3 he had the second assist on Johnny Boychuck’s bomb from the point but it was his cross ice pass to Brock Nelson that was a back breaker for the Canes.  Tavares was low between the face off circle and goal line along the boards to the right of Cam Ward then threaded a needle pass to Nelson all alone at the left crease for an easy one timer putting the Canes in a 0-2 hole.

Officially it was an even strength goal but came 1 second after the penalty ended.

Gleason Stands Up For Teammate

Nelson scored another powerplay goal early in the second that temporarily silenced the Caniacs. Tim Gleason, back for his second tour with the Canes, took a roughing penalty when he stood up for Nathan Gerbe getting knocked down after a whistle.  If the Canes kill off that penalty, it would be a good penalty, they didn’t and it goes as a senseless penalty. Cane newcomers Victor Rask, Patrick Brown, Jay McClement and Malone all looked confident in their roles.  Rask actually had a very good game overall and has some impressive offensive skills. Defense: no so much right now but the kid is willing to pay the price in the dirty area of the crease.

The Canes had their opportunities with 10 shots in the period.  Elias Lindholm and Rask were very good on faceoffs and no question Coach Bill Peters wants speed on both sides of the puck. Players that have been known to be slow coming back on defense, skated hard to their defensive zone.  Speedster Pat Dwyer didn’t look 100% but had a respective game.

The Canes finally got on the board on a powerplay goal early in the third.  Andrej Sekera passed over to Justin Faulk on the right point. Faulk sent a hard slap shot right on net. Gerbe was camped out in front of the goal and somehow got a piece of the puck as it flickered over the pads and barely got over the goal line.  The Caniacs were back in the game as the arena got loud and many had hope for a comeback.

A few minutes later, the Canes had another defensive miss assignment as Mikhail Grabovski  was all alone to Ward’s left and sent one in just inside the far post for another Islander 3 goal lead.  The Canes didn’t give up as Sekera made a sweet diagonal pass to Chris Terry who buried a one timer to close the gap.

Late, too late in the game for a miracle, Jiri Tlusty, Lindholm and Eric Staal were battling for the puck behind the goal while on a powerplay.  Staal came away with the puck, went to the corner, came back into the faceoff circle then sniped one in the only 4 square inch opening of the goal to close out the scoring and equaling his powerplay totals for all of last season.

There are differences, improved differences in this team to last year’s.  Players are skating hard on both ends of the ice, digging for pucks in corners is a team effort, the speed is noticeably faster and the powerplay is quicker all around.  Being at a game watching a particular player off the puck provides a better insight to how skilled and strategic this game is.  Not to mention the excitement of the crowd and the barbecue.