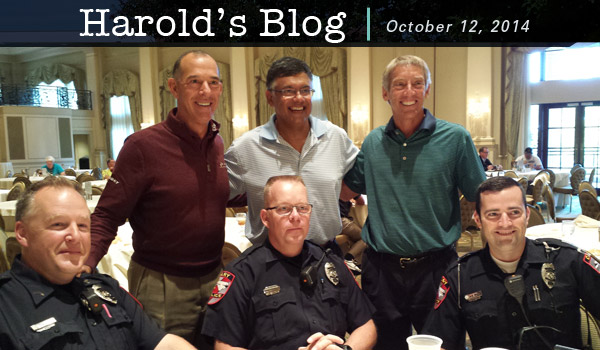 Cary, NC — This week was dominated by the SAS Championship, so there will be little town business to report since I had very few meetings.

Monday, I joined town management and staff to meet with the Friends of the Page Walker museum committee. This group is interested in joining with the town to make the Ivey-Ellington House, located on Chatham Street, a museum. After a good discussion, the staff agreed to gather information about proposals in the immediate vicinity and then present that information to council in a staff report. The staff report may take a few months since we are waiting on information about a proposal.

My scheduled meeting with the town manager was very brief. Our only conversation during the day was about a social media campaign directed at me and other mayors about future development at the Lake Crabtree Park. The decision makers about the park and its trails are not the mayors but the Wake County Commissioners and the RDU Airport Authority. My understanding at the time was that the current 5 year contract will not be renewed but may be a year to year contract. Of course this is all speculation at this point. It is important to emphasize that this is not a Cary decision and Cary has no plans to build or encroach on the Lake Crabtree Park and its trails. In addition, I did mail the RDU Airport Authority in July about park concerns:

The Town of Cary understands that in the coming months the RDU Airport Authority will be considering a report by the Urban Land Institute (ULI) regarding future land development activities on roughly 2,000 acres of undeveloped RDU property. We understand that this land planning process is likely to be a long one and is just the beginning of this effort and would likely be years before any development would occur.

As the Board and RDU staff begins reviewing the report, please consider how development of ‘Parcel D’ may impact the adjacent Lake Crabtree Park. This Wake County Park is a valuable resource for the area and is a significant feature in western Wake County that enhances the quality of life for the entire region. We would ask that you give thoughtful and careful consideration to any proposed land use or development plan that might adversely impact this amenity for our region. As you weigh how the development of your property will look to complement the world-class facilities already at RDU, please consider how the existing Park can also complement your planning efforts.

Thank you for your consideration on this matter. We hope you have a productive review.

I can assure you the town has done and will do everything within our authority to protect the town’s interest.

Tuesday I met with a citizen serving on one of the town’s boards and commissions. This individual wanted to talk about their role on a board and how they could benefit the town. I always encourage all of our board members to say exactly what they think about a topic. It is the citizen perspective that is very important in decision making.

Tuesday night I attended that SAS Championships pairing party. This was a social followed by a trivia contest. The order of finish in the trivia contest determined the selection for the professional for the Pro-Am the following two days. My team selected Mike Goodes for Wednesday and Joey Sindelar for Thursday.

Wednesday and Thursday was spent participating in the SAS Championship Pro-Am. In addition to the professionals, I was joined by council member Smith, Chamber President Howard Johnson, and Ralph Ashworth of Ashworth’s drugs. We had a great time and finished in the middle of the pack in scoring.

Thursday afternoon I taped a welcome to the SAS Championships for the Golf Channel. I was concerned that this taping would not look good since the teleprompter was above the camera which made me appear that I was looking over someone’s head as I talked.

In emails received from staff this week, council was notified of all the projects under review. They include:

As I mentioned earlier, I have received dozens of emails during the last couple of weeks about the RDU Airport Authority not renewing a lease with the Wake County Commissioners. Interestingly, the emails were directed at me and other mayors as if we had decisions on this or big influence. In my response I gave the letter I sent to the RDU Airport Authority in July expressing concern about this land being developed. The latest information in this story includes the following information from the assistant to the Wake County Manager:

In 1985, the County signed a lease with the Raleigh Durham Airport Authority (Authority) which allows the County to operate a park on an approximate 33-acre tract of land that includes the parking lots, picnic shelters, boat launch areas, and docks. This lease is scheduled to expire on June 30, 2025. These parcels are referred to as the “Lake Crabtree Regional Park.”

In 1994, an amendment was made to the lease for an additional 148 acres. This parcel is referred to as the North Carolina FATS Mountain Bike Club Amendment. This amendment allowed the County and the bike club to maintain a system of trails for mountain bike and hiking purposes on this tract of land. The amendment was set for a five year term and required both parties to agree to renew. Amendment number four expired December 31, 2013.
In early 2014 staff from both the Authority and Wake County proceeded with a normal renewal process. As a result, the Board of Commissioners approved on March 17, 2014 a five year lease renewal for the North Carolina FATS Mountain Bike Club amendment.

At the same time the Authority was evaluating the long term use of all of its non-aeronautical land. This included hiring the Urban Land Institute to evaluate possible uses and provide recommendations. Some of you may have participated in that process in March of 2014. While ULI did identify the FATS parcel as an area of possible development, the Lake Crabtree regional Park was not included in that study, and it is not in any of the airport’s development plans. The Authority has been very clear from the beginning of the ULI public process that the Lake Crabtree Regional Park was not going away.

The Authority did not move forward with the five year renewal of the FATS parcel pending the completion of the ULI report and the Authority making a decision on how to move forward with that parcel. With no executed Amendment, the County does not have legal authority to use the property; subsequently, the County’s Park Use Agreement with Triangle Off-Road Cyclists (TORC) to maintain the trails is no longer valid. Recently, staff has fielded a number of questions from TORC and the public about the future of the trails and relationship with the RDU Airport Authority.

From my understanding the bike trails are likely to remain safe for now but there might be development between those trails and I40 in the future.

In an email from a citizen this week there was concerned expressed about police action in Fuquay. The citizen wanted our police officers to wear body cameras to prevent a controversy. Here is the response from the police chief:

Thank you so much for taking the time to express your concerns about the incident that happened with the Fuquay Police Department officers. I am familiar with the incident that took place in Fuquay but only from what I have heard from others and through the media. I have not spoken directly with anyone from the Fuquay Police Department. From what I know, it was a very unfortunate situation. We would like to believe we could take measure to ensure those events would never occur in Cary, NC, but we can never guarantee that. However, we do go above and beyond to build relationships and partnerships with our citizens and community members. We are very fortunate to have an outstanding training program and attempt to train our officers well for any kind of situation they may encounter.

In addition, we have been nationally accredited since 1992 through the Commission on Accreditation for Law Enforcement Agencies (CALEA):

We use dash cameras in police vehicles assigned to officers in field operations. In addition, our motor officers utilize body-worn cameras. We have additional body-worn cameras available for supervisors to assign at their discretion. There has been a great deal of discussion across the country on requiring officers to wear these cameras. We are reviewing the pros and cons. The technology is still not as well-developed as some people might believe and storage for the recorded images is a major obstacle at this time. We are continuing to research the feasibility of requiring body worn cameras for all officers but are not prepared at this time to make a wholesale recommendation that we purchase them for all of our officers. Our in-car cameras are capable of video recording interactions that occur within the camera’s view. They are also capable of recording a great deal of the voice interactions that take place outside of the camera’s view.
Again thanks for taking the time to be involved. If we can ever be of assistance to you or answer additional questions, please do not hesitate to contact me.

I am so proud of our police department and its leadership. We always seem to be one step ahead in areas of law enforcement.

In another email from citizens there was a complaint about the appearance of the town’s Wayfinding signs. I thought it would be a good idea to provide information on this program since it was done so long ago. The signs showing up around town are part of the vehicular Wayfinding signage directing travelers to Cary’s major parks, recreation and cultural venues, as well as to Cary’s Downtown district. The Wayfinding signage system was originally adopted in 2008 as part of the park’s comprehensive sign plan. The downtown’s signage was approved in 2010. Budgets for the last 3 years have allocated money for the signage. The first fifteen vehicular signs were installed last month. The sizes of the signs are based on NCDOT legibility standards.

This week includes a meeting of the Capital Area Metropolitan Planning Organization, a council meeting, and Diwali at Koka Booth Amphitheater.

Well, that is all for this week. My next post will be on Sunday, October 19th. Although I have Facebook and Twitter accounts those are not the best means of communications with me. Please send all Town of Cary questions or comments to Harold.Weinbrecht@townofcary.org and email personal comments to augustanat@mindspring.com.