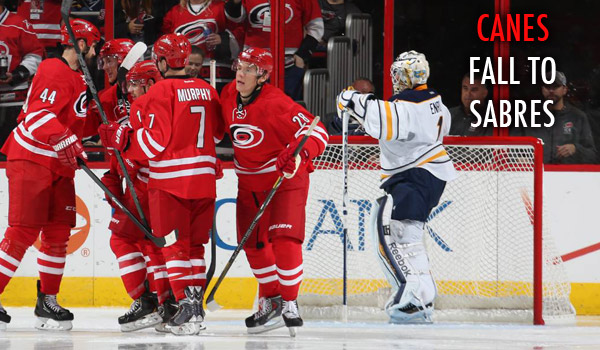 Editor’s Note: Due to a publishing error (my bad), this story did not go out last week as planned. However, as usual, Bob has something interesting to say for Canes fans. We promise to exercise more diligence in the future.

Raleigh, NC — The Carolina Hurricanes finally got their first point after an 8 round Shoot Out loss to the Buffalo Sabres, 4-3 on October 14.

The Canes bad luck continued as top defenseman Andrej Sekera, left the game late in the first after hitting the boards hard after a 5’ flight.

For the third game in a row the Canes came out the stronger team dominating puck possession and attempted shots in the first few minutes.

Before the game, the Canes and the Sabres were the last two teams winless and without a point in the NHL.  The game was also nationally televised which gave both teams more of an incentive to get their first win.

After the first few minutes with most of the action in the Sabres’ end, play seemed to take place between the blue lines for a good portion of the remainder of the first period.

Late in the period, Sekera methodically brought the puck into the Sabres end and started going down the slot when it appeared Sekera was tripped. Somehow the refs didn’t ask me or saw what I saw so no call was made.

The Sabres got the puck out of their end and went up ice on a 2 on 1 with Sekera skating hard to recover. Just as Chris Stewart passed over to Marcus Foligno who scored, Sekera tripped over Cam Ward’s pad at the goal line, went airborne hitting the boards hard with his shoulder, head, knee and skate, knocking him out of the rest of the game.

Very early in the second, Nathan Gerbe had good speed going into the Sabres zone.  Gerbe dumped the puck just after he crossed the blue line following the puck behind the net forcing Jhonas Enroth to play the puck around the boards to the right of the goal.  Jay Harrison pinched a bit along the half boards then whipped a shot right on net hoping to catch Enroth off guard.  Enroth made the initial pad save but Riley Nash was in the prefect spot in front of the crease and sent the rebound into the net to tie the game.

The tie was short lived as after the Canes failed to clear the puck, Brian Gionta fed Torrey Mitchell who took a shot from 30’ out that Ward would want back and was clearly disappointed in his play.  Again much of the action was between the blue lines with both teams having fewer shots on net than they did in the first period.

While just under 15,000 Caniacs were in attendance, there was a sense the Canes would have a comeback.   A bad pass from deep on the right side of the defensive zone, across to the left wing in the neutral zone, was easily intercepted by Foligno who carried the puck into the high slot. Surrounded by 3 defenders without another Sabre in the Canes end, Foligno sent a wrister just inside the post on Ward’s stick side for a commanding 3-1 lead.

The Canes were pressing hard after that with the defensemen joining in the attack more than usual.  Midway in the period, the Charlotte Connection paid off when Zach Boychuk dug for the puck along the half boards then sent a smooth pass to Chris Terry who was charging the net.  Terry wasted no time with a quick flip shot that brought the Canes back within one goal and woke up the Caniacs.

The Canes pressed harder and relied more on speedy and more skilled players. Very late in the game the speed and skills paid off as the Canes were digging hard, passing hard and crashing the net hard.  Terry had the puck behind the net and returned the favor he got from Boychuk a few minutes earlier by feeding Boychuk who was camped out in the dirty area of the crease.  Boychuk has a very quick stick and sent the puck high into the net so fast it hit the top inside frame so hard it came out as fast.

The goal judge saw what everyone in the lower bowl south saw and turned the goal light on but the ref signaled to play on despite 3 Canes jumping in celebration.

Play continued for another 20 seconds until Ward made a save when the video judge got called into action.  The Video Screen in center ice had the Caniacs make the call before the ref as it was a clear goal sending the game into OT with both pointless teams earning a point.

The 4 on 4 OT was exciting with chances on both ends.  The 8 rounds of the shoot out only produced 3 goals which is not impressive, with Buffalo getting the win.

One bright spot: the Canes dominated in the faceoff circle with Lindholm and Rask looking very strong.  The Canes take a perfectly times road trip to western Canada missing the State Fair traffic and hitting that part of Canada in decent weather.  I may have to talk to Hal about a road trip.