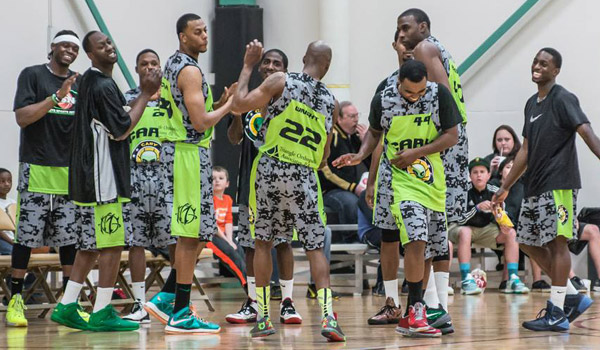 “With the depth of talent Coach Hatchett has assembled the Invasion should have no trouble running the League again this year”, team owner Doc Thorne stated, “Coach’s biggest problem is going to be managing each player’s court time.”

The Invasion have also stepped up their number of games this season.  “Cary’s Team” will play 18-home games (2-away) including their annual benefit match-up against the Cary Police Department February 7th.

Then, two-weeks later on the 21st, teams will be sending their best players back to Cary for the TRBL/Kay Yow Cancer Fund All-Star Game.

Rounding-out this aggressive schedule, the Florida Basketball League’s champion team “Florida Flight” from Orlando, will be traveling to Cary on April 18th to revenge their 2011 CBA loss to the Invasion.

If the Invasion wins the first round of the League playoffs, the semi’s and finals will also be played here in Cary. This should add up to an exciting season.

In their inaugural season the Invasion won the 2011 League Championship and have won the TRBL Eastern Division Championship every season since. This year should be no different.

“The fans this season are in for a treat. Not only has the play stepped-up but so has the experience of attending an Invasion game. This season we have the talented Invasion Dancers, led by Ariana Goldstein, to help keep the fans in the game; plus more entertainment, more concessions and more fun,” Thorne said. “For instance, during our season opener we’re planning to have the amazing Helping Hand Mission Band entertain fans at halftime, and international gospel recording artist Coco McMillan will be performing the National Anthem to open the game and the TRBL season.”

At this first game,  the first 100 children to enter, accompanied by an adult, will receive a free Alien mini-basketball. During game play the Invasion Dancers will be handing out Invasion T-shirts. The team is planning  on high-energy, fan-excitement and  basketball excellence.

The gate and concessions open at 6PM with the tip-off scheduled for 7PM.
Tickets are $10 for adults, $5 for youth, and children under 5 are free.