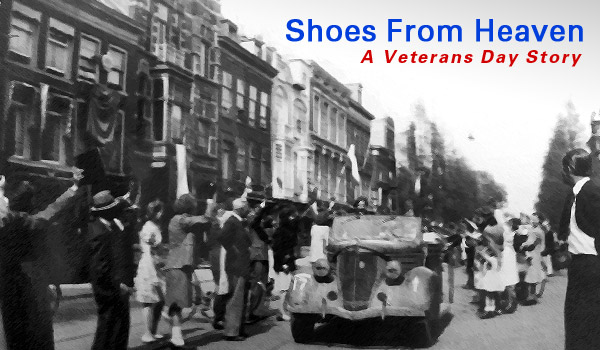 (Editor’s Note: This story was read by the writer, Saskia Leary, to the 500 attendees at the Town of Cary’s annual Veteran’s Day luncheon on Friday November 7, 2014. Saskia lives in Cary and volunteers her time with the Cultural Arts Committee among other pursuits.)

Cary, NC — For the past few years, I have been involved with the USO. With this story, I want to honor the American troops who were stationed in the Netherlands in 1945 and all of you.

I write in memory of my Father, Sikpe Visser, who was executed in the Vught concentration camp, and in memory of my stepsister’s father, Wiebe de Vries, who died in 1939 during military exercises.

I was born in the winter of 1945 in the Netherlands. My stepsister was 10 years old. That winter was very cold with snow on the streets and ice on the lakes. But my sister and her friends were not skating.

In 1940, German troops had invaded The Netherlands. Now, almost 5 years later, the Dutch were exhausted and very hungry. Stores were almost empty and there was very little growing on the frozen fields. Everything, including milk, bread, and sugar, was rationed. That means that families needed coupons, or food stamps, to exchange for small amounts of food. In that way, everyone would at least get something to eat. Sometimes, sugarbeets and bulbs were the last resort to bring something on the table.

In order to obtain the food stamps families had to be registered. For some Dutch families that was not safe, particularly for Jewish families. Many Jewish families tried to hide from the Germans and left their homes.

Both my parents were very active in the Dutch Resistance. My father and his group helped Jewish families to find host families where they would be safer. Earlier during the war, my father had started a job at the food stamps Printing Office. He had applied for the job with a plan and a mission.

Residents who provided a hiding place for those in need needed extra food stamps for their “guests.” My father came up with a method to duplicate the original food stamps. He, and members of his group, passed on more than 250,000 extra food stamps to host families and saved many from starvation.

My father was a risk-taker, an accomplished burglar (illegal activities took place after business hours). The group nicknamed him the “The Boss,” and the Germans referred to him as “The Bandit.”

At the end of 1944, my father was informed that he was under suspicion and changed addresses. My mom, now pregnant, was advised to leave town. She and my stepsister stayed on a farm.

Then, one night, the Gestapo knocked on his door and my father was transported to the Dutch concentration camp called Vught–which is now an educational center.

Born in the Hunger Winter

I was born on January 21, 1945–a day in the season that came to be called the “Hunger Winter.” There was no baby shower, no adorable baby room, no outfits given by friends. Our family, like everyone else, struggled to survive. Books and furniture were burned to provide heat.

And then–April 1945. American troops had arrived to help the Dutch. As part of “Operation Manna and Chowhound,” the troops dropped packages from airplanes. These packages contained food and clothes. They prevented the Dutch from starvation.

One of those packages was marked “BABY” and it was given to my mother. It contained clothes, dried milk and “little white shoes,” all leather made in the USA. 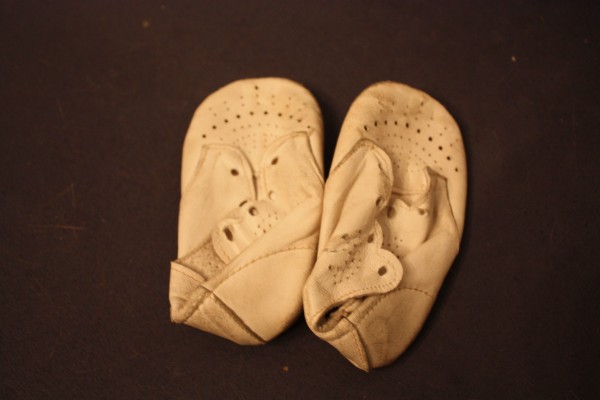 I did not know the story about the shoes until I was much, much older. My mom did not want to talk about the war, not even about the shoes. And I was afraid to ask questions, because I knew that it would make her feel sad. Then one day when my sister and I were going through old boxes and found the shoes I asked her… and she told me the story.