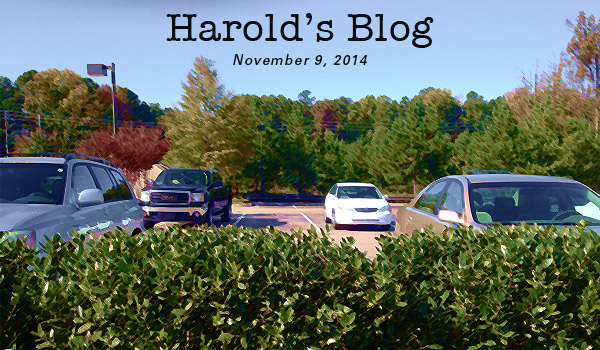 Cary, NC — This week was long week that included a major election and several events.

Monday morning I received an email from School Board member Bill Fletcher. In it he reported that teacher resignations in Wake County went from 906 in 2013 to 1210 in 2014. In the last four years teacher resignations have doubled. The email also pointed out that several municipalities are in broad agreement that 40 additional schools are needed but only 16 have been funded. The entire county is in danger of being overwhelmed with growth.

Monday night I attended a dinner with the Divan Center board members. The Divan Center was founded in 2005 by the Turkish-American Community of North Carolina. On their web site they say that dialogue is a key philosophy to settling differences and a way to move forward as a community.

To achieve this ideal, the Divan Center organizes and promotes activities including diversity awareness seminars, cultural festivals, dialogue dinners, community service, art performances, and cultural trips where people from different backgrounds can meet and find common ground. I am grateful for them and their mission to help Cary continue to be a diverse community. My dinner and conversation with the board included wonderful Turkish cuisine and great conversation.

Tuesday I visited Kindergartners at Cary Christian School who have been studying government. I explained my role as mayor and then answered questions. They were all as cute as a button and were very smart. After questions they said the pledge of allegiance, sang a song, and recited Bible verses for me. What an impressive group. I enjoyed my visit and hope I get invited back in the future.

Tuesday night I joined the entire council and over 100 people in celebrating Gale Adcock’s election into the NC House. While she will leave a HUGE hole on our council and will be surely missed, Cary will now have a representative in the NC House that knows, loves, and cares about us. God bless her and I look forward to working with her in her new role.

Wednesday I participated in a post-election night synopsis by the NC Metropolitan Mayors Coalition. Here are some of the interesting points made:

The meeting lasted about 45 minutes.

Wednesday evening I met with directors of ITT Technical Institute in Cary. My visit included a tour of the facility and an overview of what is offered. The areas of study they offer include the school of technology, the school of information technology, and the school of drafting and design. Scholarships are also available to certain students such as military. The school holds classes in the evenings and on Saturday and is designed for someone who is working.

Wednesday night I participated in the Citizen Police Academy graduation along with council members Smith and Yerha. The Citizen Police Academy is a free, 12-week program that explores topics like criminal and constitutional law, patrol, criminal investigations, youth services, DWI detection, and domestic violence. All participants will also take a trip to the firing range used by Cary Police for training.

This was the 35th graduating class from the program which was started in the 1990s. I, along with the council members, made a few remarks before the featured speaker retired Major David Wulff who founded the program. Then we handed out graduation certificates and gifts before having refreshments. God bless the men and women who gave up nights with their families to be a part of the Police Department family.

Thursday I attended an open house for Stalls Medical, Inc in Cary. They provide products and services to a wide range of individuals in an effort to enhance mobility and functional independence in the home and community. Products include adaptive vans, power wheelchairs, scooters, sports equipment, stair glides, platform lifts, ceiling transfer systems, automatic door openers and much more. Their company provides a crucial service to our citizens and we are blessed to have one of their offices in Cary.

Saturday I attended an Abilities Tennis Clinic for persons with intellectual disabilities held at the Cary Tennis Center. The clinic was positive and upbeat with everyone having a great time learning, exercising, laughing, cheering and socializing. The program not only provides opportunities for persons with disabilities but is a great example of the partnership forged with Western Wake Tennis Association, Abilities Tennis Association of North Carolina, and the Town of Cary. I was blessed to witness this great event.

Emails from staff this week included a notice that council will need to appoint members to the Wake County Transit Investment Strategy study’s advisory committee. Each municipality will appoint a number of members based on population. As a result Raleigh will have ten appointees, Cary will have six, and all other municipalities will have three except Rolesville, Wake Forest, and Wendell which will have two.

In addition, there will be appointees from unincorporated areas and various agencies with a vested interest in transit. The total number of appointees will be 70 and they are scheduled to meet for the first time on December 8th. Cary’s appointees will include one elected official, business leaders, interested citizens that are familiar or interested in transit, citizen advocates, and non-profit organizations serving the Cary community.

Next week will be another busy week and includes a quasi-judicial meeting of the council, a joint meeting of Cary and Morrisville, and several events.

Well, that is all for this week. My next post will be on Sunday, November 16th. Although I have Facebook and Twitter accounts those are not the best means of communications with me. Please send all Town of Cary questions or comments to Harold.Weinbrecht@townofcary.org and email personal comments to augustanat@mindspring.com.