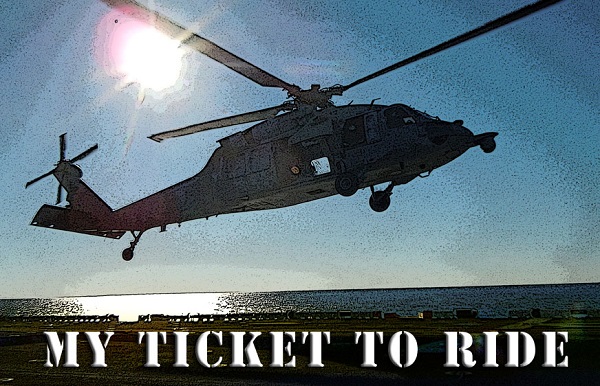 Cary, NC — Sometimes I think I am one of the luckiest people in the world. And that’s true for this month.

As part of the Cisco Social Ambassador program, I was chosen to join the “media day” for Bold Alligator 2014. Bold Alligator is a 12 day joint Navy and Marine exercise that showcases the capabilities of what is called “seabasing” and the full range of amphibious operations all while responding to multiple crisis and responses.

This year, more than 19 nations and 19 ships participated in the exercises that spanned the eastern seaboard from Washington DC to Florida, to as far inland as Indiana. The fourth Bold Alligator, there were more than 450 planes and 17,000 service people are involved, taking 2 years of planning. Our group of media folks – from bloggers and tweeters to journalists, were there to get a glimpse of what our amazing servicemen and women are doing, day in and day out.

But basically, it means that I was able to spend a day watching and interacting with these phenomenal military folks. Oh, and I was in a Seahawk Helicopter, on an aircraft carrier, but more on that later.

The day started at Cherry Point, Marine Corp Air Station. I was about to take a picture of the front of the Station, when I saw a fellow blogger getting pulled aside and questioned by some Marines, so I thought I would just wait for our escort. ☺

We headed for a briefing at Bogue Field, where we learned more about the operation and the day’s events. Although a joint operation, we were escorted by folks working mostly with the Marine Expeditionary Brigades (MEB).  These forces are set up to be  be agile and nimble, and to support the fleet’s war fighting operations. At first I was initially surprised at the number of terms used by the Marines that are also used by our product development teams and engineers, again demonstrating the need for us to continue to hire and leverage veterans with great skills and experience.

The exercise uses a fictional Treasure Coast complete with a history of countries shown on a map on top of the US map. The complex scenarios outlined in the exercise focus on background provided about these countries. What we learned during our briefing is that “the emerging democracies of Amber, Amberland, Amethyst Island, Mica and others are improving, while relations with Garnet are deteriorating. Pirate attacks plague the area while humanitarian aid to Amber, Amberland and Pyrope are hampered.” 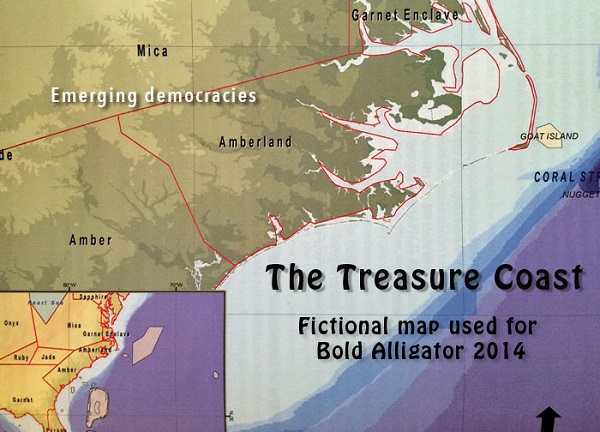 Starting a Bogue Field, we drove through barbed wire fencing checkpoints to review the Navy Expeditionary Force and Marine Wing Support Squadron operations. Think of it like the biggest tent you ever saw, with rooms upon rooms that emanate from a large center tent. We had to put down our cameras and phones for this part of the tour. 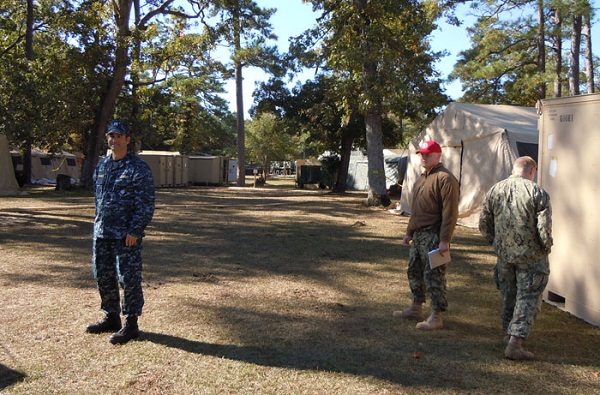 We entered the tent from a grassy and tree lined area, directly into a monitored and guarded cell phone/camera drop area. The tent had air conditioning, a metal floor, lighting, networking operations, huge screens, and, I was glad to see Cisco phones all over the place. These tents are erected in hours not weeks, and it was nicer than some conference rooms I’ve been in. The situational awareness room (my words, not theirs) reviewed chats, and incoming intelligence from various sources.

After that we toured an area set up to show us the various disciplines in use – from Explosive Ordnance Disposal (ok, bombs) via robot, and this bomb suit, below. (Gulp!) One of the folks in our group asked how someone gets that job…you know, the guy the gets to wear the bomb suit.  “He must’ve drawn the short straw.”  The soldier corrected him immediately.  “No sir, the person in THAT suit has the MOST experience.”  Makes sense, but reminded me of the sacrifice our military folks make everyday.

I also met several entomologists. Yep, the Navy has entomologists – otherwise known as bug people. There are 38 entomologists currently serving on active duty supporting the marines throughout the theatres – from malaria control, pests on ships and they work to identify possible other issues as well. The folks I met had just caught several Black Widow spiders in the tents just deployed, and they wanted me to see it up close. Ummm, no thank you. 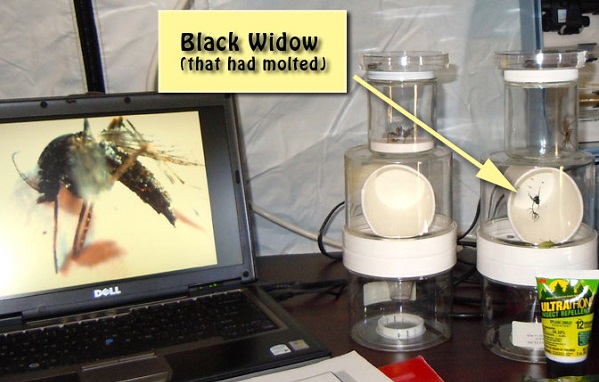 After that, we headed to the Bogue Air Field, to see field operations. Did you know Marines can put down a runway or air pad in just hours? And put together a runway that will support a Harrier aircraft in just days? It’s a key component in their rapid deployment, agile system. The other equipment was just as impressive, such as the fire truck and runway cleaner. 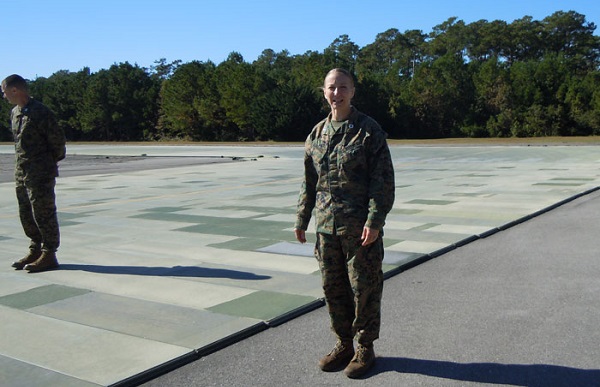 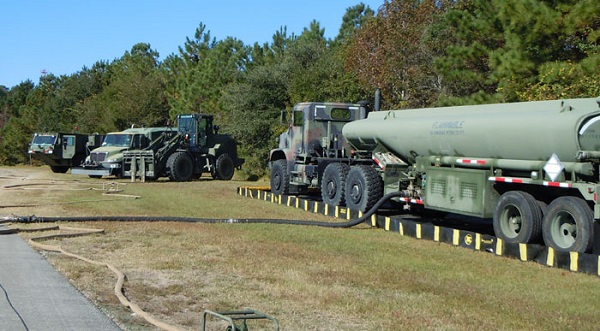 After lunch at the Officers Club, we headed to the USS Kearsarge (KSG) via helicopter. Putting on the cranial helmet (perfectly named), as well as the life vest, we loaded up the Seahawks to head out for a 40 min flight to the carrier.

Getting buckled up in my 4 point harness, sitting backwards, while not being able to easily look down (with that huge helmet on my head) was a trip. It was a little bit of a bumpy ride, but absolutely exhilarating. Landing on the KSG was crazy – just think about landing a bird on a moving target, that is moving up and down at the same time. These pilots are so well trained, they made it seem like parallel parking. (Still difficult for many without the backup camera. ☺) 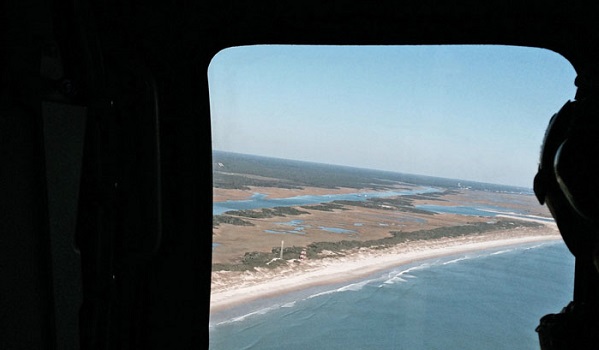 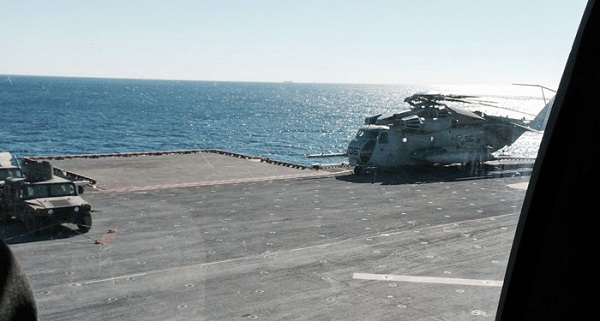 The USS Kearsarge, a small aircraft carrier, is officially called an Amphibious Assault Ship. It supports V/STOL – (Vertical/Short Take-Off and Landing) planes, and helicopter aircraft. It’s 846 feet long – think 3 football fields, and normally houses 29 aircraft. (There were 18 birds on board that day.) Some of them are not on deck, as you can see here. 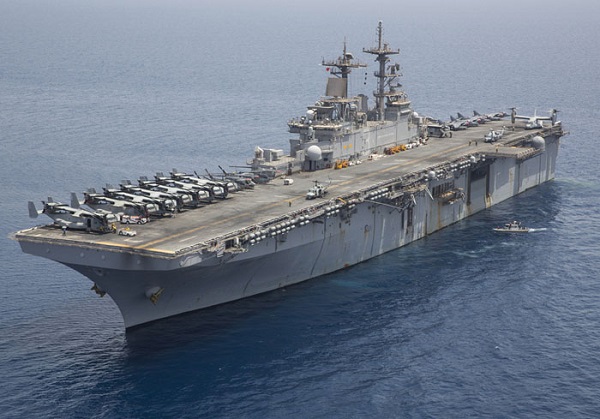 It’s a FULL SHIP!  Normally, there are a little over 1100 Sailors on board, and once you add the Marines, about 3100 souls on board.  Which is how many there were, when we were there. 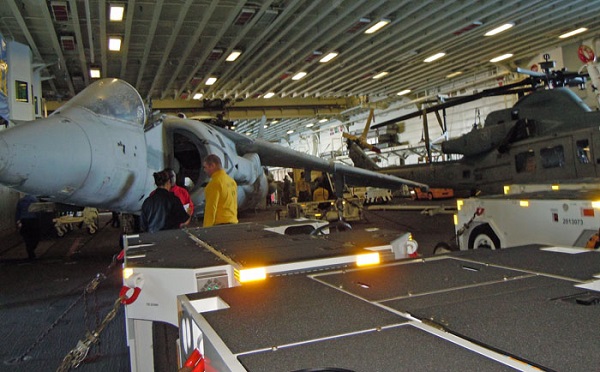 Next was a meeting with Major General Richard Simcock and Rear Admiral Cindy Thebaud. We got a run down of the partnership between the Navy and Marines, or what they call, “putting the blue and green team back together.” 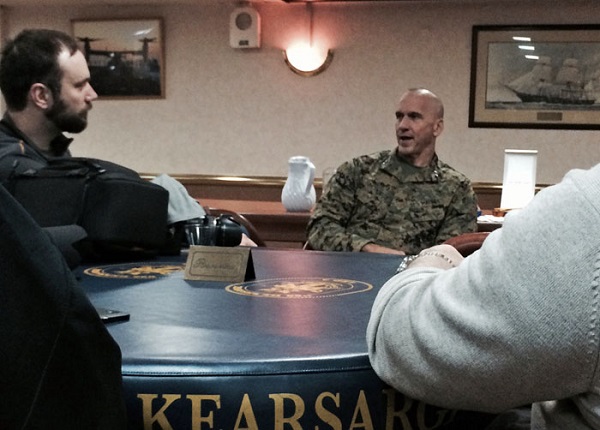 The KSG was like a mini-city, with our tour we saw much of it – from the gym, to the decks, to the ward room and eating bay. 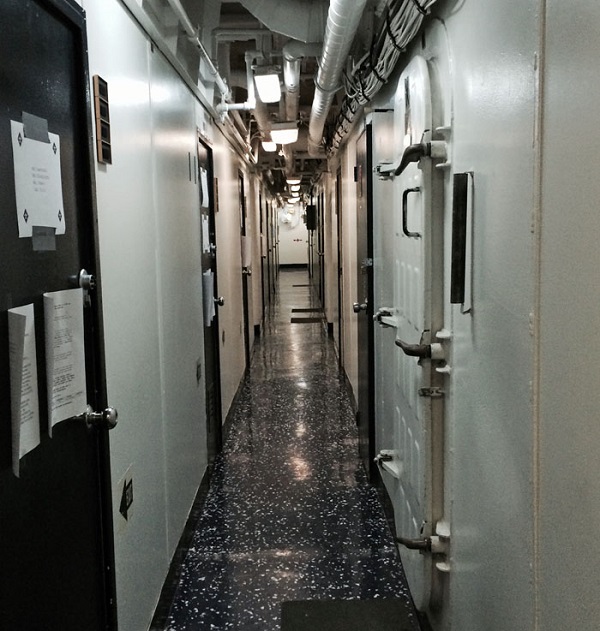 Oh, and the carrier is sovereign U.S. territory – so when you are in international waters and on the carrier, you are in the U.S.

A quick trip to the bridge, to get a view of one of the highest points we could go, was a thrill. And, the most swaying part of the trip. The bridge is really the ship’s command center – where the captain controls the movement of the ship. 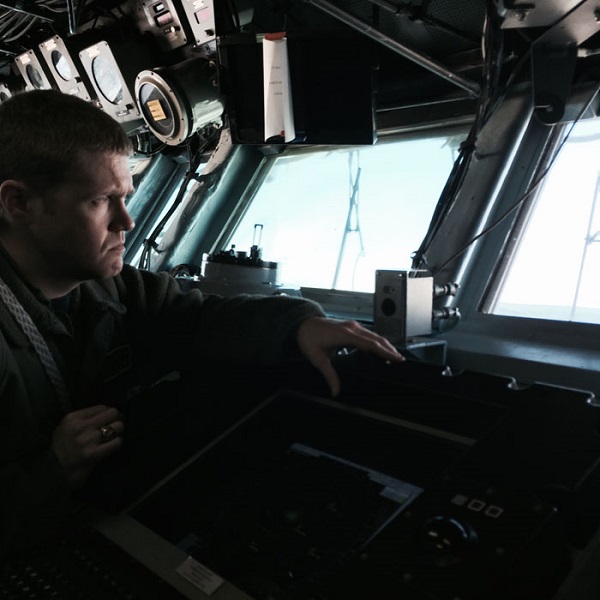 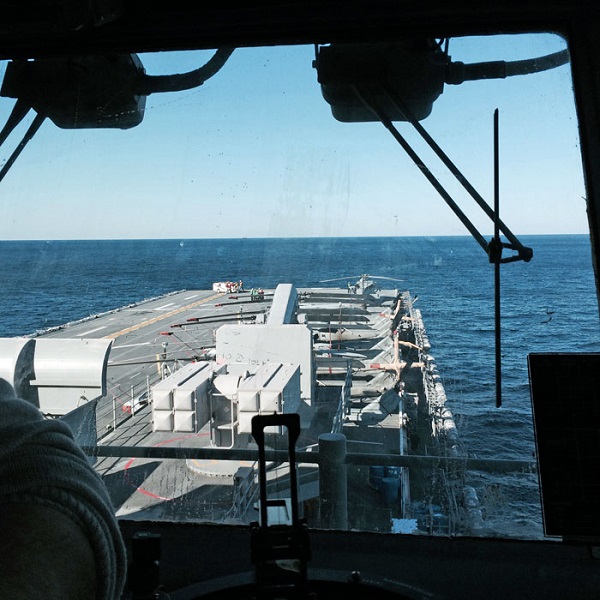 Get a look at these guys. Young, huh? The fine young man on the right is 19 – and he’s driving the ship. The gentleman on the left, he’s 20 something, and he runs propulsion and it takes about 5 miles to actually stop the ship.  Yes, about 5 miles. 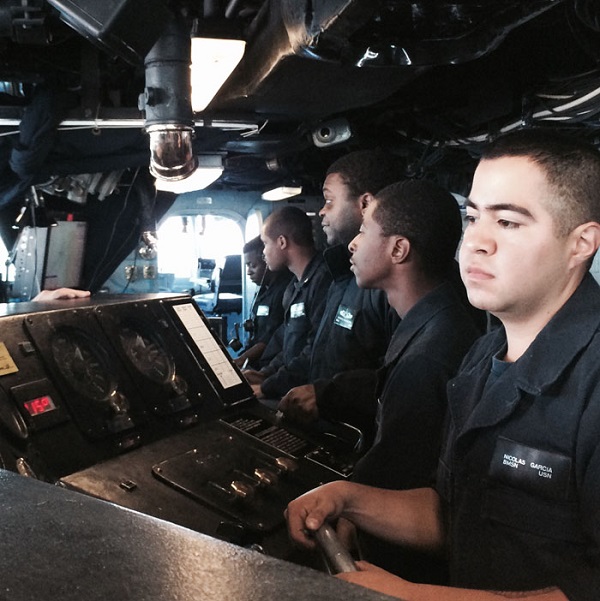 The navigation team of 3 sailors were also under 21, and all with significant experience and presence. If the captain says they can do this job, I believe him.

Next was a quick trip to the secondary bridge, where we could get a really great view of the ship. There the captain shared some great stories and more about the USS Kearsarge’s capability to do replenishment at sea, how tension lines for fuel and cargo make the job easier, and his longest time consecutively at sea without a stop at a port, 142 days. 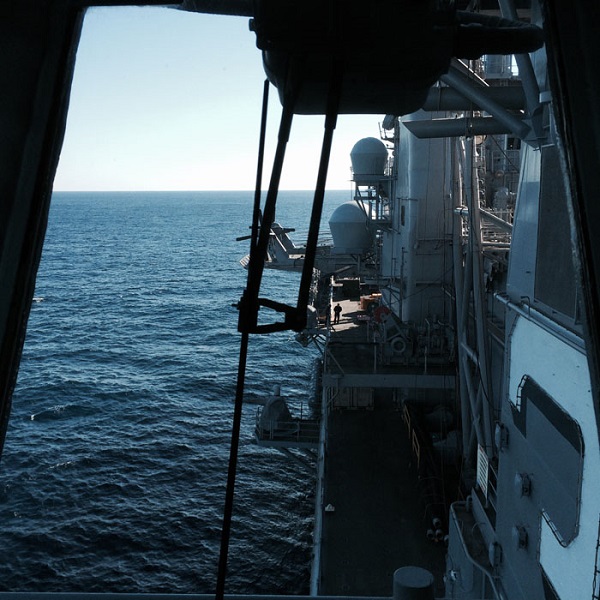 Finally, we headed to the deck – to get up close and personal with the flight operations. Donning a float jacket and my favorite headgear, we headed up. At first, I couldn’t believe we would be this close while helicopters were taking off and landing. But, we were.

I followed our escort, and ended up stopping short of the destination as a Seahawk made its way to land right across from me. That was my opportunity – I grabbed my camera and decided to get some video – without really noticing all the Marines planting themselves perpendicular to the landing spot. Then, the prop wash of the roters hit, and I almost lost my balance. That’s why they planted themselves. Duh. I got a better view when I moved further up the deck.  (Check out both videos below) The Seahawk must’ve made no less than 15 landings – back and forth, some of that for us, I’m sure, and some as training. The whole operation looked highly tuned and organized.

We made our way back inside, to catch our own flight back to the Base. Right before us, however were several dignitaries, we were told they were Retired Generals. The custom is to set out a red carpet and then sailors, called side boys, would arrive to flank the entrance area to form a passageway at the gangway. The number of “side boys” there is dependent on the rank of the Officer and they stayed at their post and saluted the dignitaries as they left. 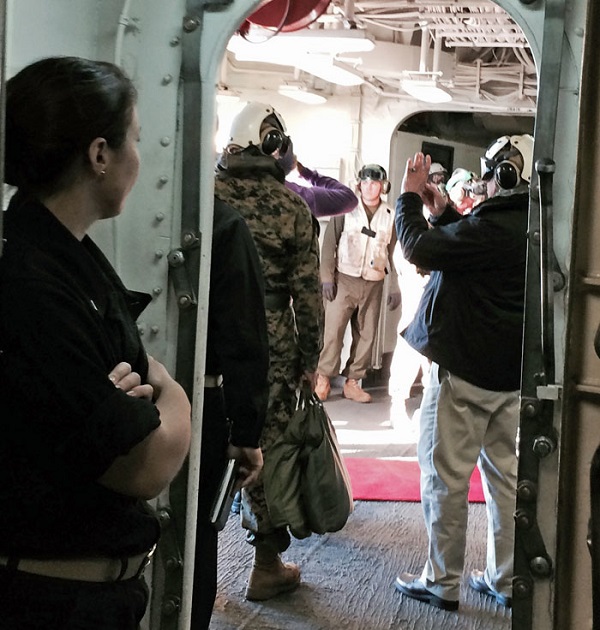 Then it was our turn to travel back. The day went by so quickly, it seemed like I had just been in the car at 4:30am on my way there, and here we were going back to the Base.

As we took off quickly from the USS Kearsarge, I looked back at the ship – knowing that I now have some lifelong memories, an amazing experience and a huge appreciation for all of our service men and women in the Armed Forces.

To all of our veterans and active service members, thank you for your service. I couldn’t have asked for a better day, than to spend it with you. We are all in your debt.

I would like to thank Dennis Hall of the Avere Group, and the Cisco Social Ambassador program. The Social Ambassador program recognizes employees and contractors who have adopted social media as part of their job and/or would like to expand their skill set. Over 1,000+ members all over the world are currently participating in the program. Dennis and Cisco – thank you for making this the Best Day Ever!

My participation in exercise Bold Alligator 2014 is the outcome at the outset of a pro bono relationship between Rachel Bakker, Cisco Systems Social Media Manager and Dennis Hall, founder of Avere Group, LLC in California dating back to 2011. Dennis Hall has nominated community leaders on a pro bono basis to the military for public affairs embarks for over 22 years, including employees of Cisco Systems before the collaboration. He is neither an employee nor contractor of the military.

Story and photos from the blog of Lori Bush, At-Large member of Cary Town Council.