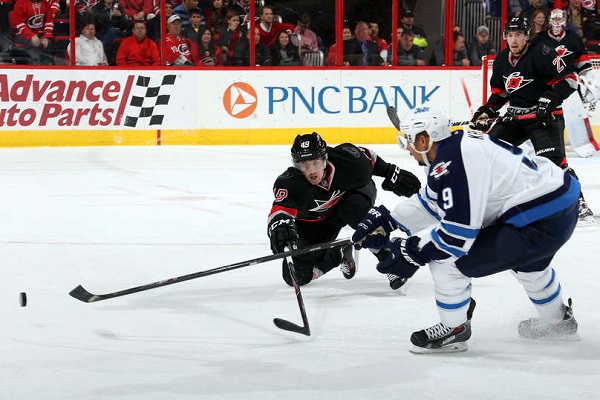 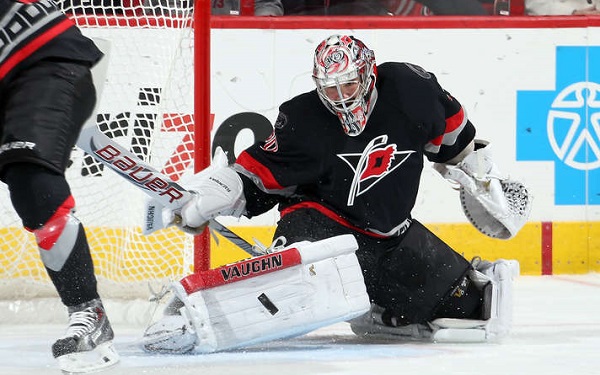 Raleigh, NC — The Canes stayed busy at the PNC Arena last week but lost both games to the Winnipeg Jets and the San Jose Sharks.

The consecutive point streak the Canes were enjoying ended after six games at the hands of the Winnipeg Jets, as the Canes lost 3-1 at the PNC Arena Thursday November 13, 2014. The Jets, with former Canes head coach Paul Maurice and former Cane Andrew, certainly have had the Canes’ number the past few years.

Rask of the Canes attemps to stick check Kane of the Winnipeg Jets as he tries to control a loose puck.

Ward is a Fantastic Player

While this was Cam Ward’s first loss in November, he did not have a bad game; in fact, he had a great game. Without Ward, this game would have been lights out after the first period. The Jets scored early on a tip in through traffic that was no fault of Ward’s.

Later in the first, the Jets had a 3 on 1 with Jay Harrison, the lone defense-man. Harry slid on his belly towards the wing, carrying the puck. The timing wasn’t ideal, as the winger got off a pass to the far wing for a sure goal, but Ward made a cat-like quick butterfly split for a great save that should have been a wake-up call to his teammates.

The Canes were lucky to get out of the first down the one goal, as their play was not at the level it had been at in previous games this month.

Early in the second, the Canes got back into the game on a power play. Coach Peters had the young guns on the first shift with the man advantage. Every player has speed, great passing ability and excellent shots. The Canes were lucky to keep the puck in the zone for as long as they did as the puck, oops, slipped off sticks, passes were lost, oops, but their speed and tenancy allowed them to retain possession. After a pass was almost intercepted, oops, Nathan Gerbe passed to Elias.

Lindholm camped out on the right side of the goal. Lindholm is sneaky strong and made a power move to wrap the puck short side but, oops, the puck slipped off his stick but fortunately hit a defenders skate and went into the net to tie the game at 1 a piece.

Midway in the period, it was déjà vu all over again as Blake Wheeler had his second tip in with heavy traffic in front of Ward. The Jets’ forwards are not only big, they’re huge. Pushing Wheeler out of the crease area is no easy task and is an area where the Canes need some size and grit.

Ward is a Wall

Ward continued to allow the Canes to stay in the game, but the skaters just didn’t respond. Give the Jets credit, as they played a very good team game.

Coach Bill Peters started the game with Eric Staal on the left wing and made several line changes during the game. Sometimes that’s a good thing, but most of the time it’s because what’s out there isn’t working. This was all because it wasn’t working. The only good part of the night was that Ward didn’t allow good friend Ladd to score. The Jets third goal was an empty netter, killing the Canes chance of having a point in every game for the month.

Their next home game was on Sunday against the San Jose Sharks.

Troy Grosenick, playing his first NHL game, stopped all 45 shots by the Carolina Hurricanes for a 2-0 San Jose Sharks win at the PNC Arena Sunday, November 16, 2014.  The Canes certainly had their chances and had several quality scoring chances but couldn’t get one by the rookie goalie. 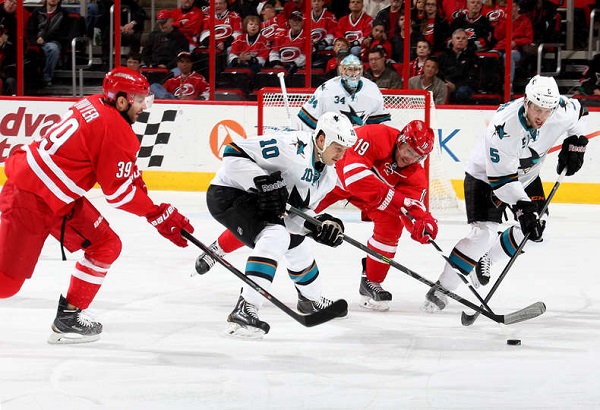 Peters: We Started On Time

The Canes head coach, Bill Peters, has an expression about playing a full 60 minutes, especially in the start of a game which he calls ‘starting on time.’ The Canes started on time, put their foot on the shot pedal and didn’t let up the entire game.

It appeared that Grosenick was told to hold the puck on shots to slow the game down–a smart move for rookie goalies. That strategy paid off as, when the Canes were putting heavy pressure, Grosenock froze the puck for a face off. After a strong offensive play by the Canes in the Sharks end, the Sharks had a 2 on 1 with Andrej Sekera, the lone defense-man.

Sekera slid, knocking the pass by Tomas Hertl in the process. Hertl followed the pass and was fortunate to be in the right place as the puck came free from under Sekera was pushed softly in the net. At that point, that was only the 5th shot on Anton Khudobin compared to the Canes 12. The Sunday afternoon crowd was very much into the game and just knew that, sooner or later, the Canes would be on the board.

Everything was Right But the Score

The Canes continued their shot barrage in the second and third periods but just couldn’t find the back of the net. The Caniacs saw that everything was right but the score. The Canes were skating hard, getting in the dirty area of the slot, forechecked well and, at times, were like a wall at their own blue line.

There wasn’t a lot of hitting by either side, which suits the Canes just fine as they were the smaller team by far. Every Cane skater was better than their counterpart, but this was one of those games that just didn’t have a good ending.

The Sharks’ second goal was an empty netter. In a class act, the Canes’ Jumbotron showed a close up of Grosenick’s parents in attendance after the game, both beaming with joyous tears of their son’s impressive first NHL game.

In another class move, the Canes had several videos regarding the death of United States Army Special Forces Sgt. 1st Class Michael A. Cathcart. Cathcart, who skated with the Hurricanes during a special practice at Fort Bragg last season, died as a result of injuries sustained during combat operations on Friday in Kunduz Province, Afghanistan.

We are deeply saddened to hear that we’ve lost Sgt. Cathcart. The day that Mike practiced with our team at Cleland Ice Rink at Fort Bragg was a very special day for our players.

People throw around the word ‘hero’ too easily sometimes, but Mike Cathcart was a true hero. He proudly served our country and died protecting our safety and freedom. We are grateful for that day we were able to spend with him and the impact he left on our team. On behalf of the Hurricanes organization, I send heartfelt condolences to his family and his unit.

Carolina Hurricanes coverage by Bob Fennel. Photos from the Winnepeg Jets and the Sand Diego Sharks.

Temps Set to Plunge in Cary
Scroll to top