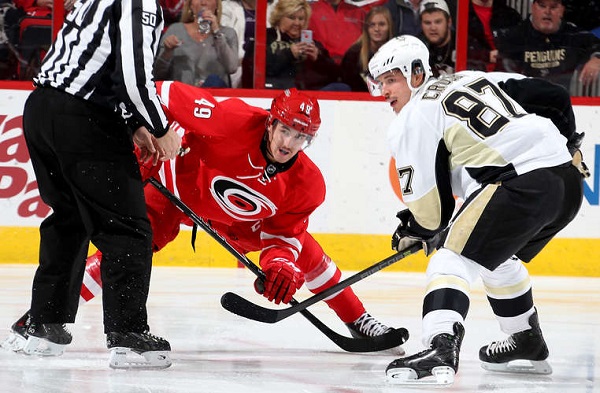 Raleigh, NC — The Carolina Hurricanes are back home after a dreadful road trip that ended on a high note. The team beat the Pittsburgh Penguins 4-2 in the Steel City and came close to beating them again on Saturday night in Raleigh.

The Canes’ power play has been very effective lately thanks to coach Rod Brind’Amour’s relentless hours of watching film over the summer to find out what works well with other teams and what needs to change for the Canes to improve.

Early in the game, the power play reaped the reward of a goal with effective, quick passing and traffic in front of the net.

The speed unit was on the ice first with Victor Rask and Nathan Gerbe playing catch and waiting for the right player to be in the right position. After everyone was settled, Rask passed over to Justin Faulk who sent a bomb from about 50’ out to beat the goalie stick side for a 1-0 Cane lead.

Unfortunately, on the first defensive breakdown just seconds later, the Pens evened the score. The Pens dumped the puck deep in the Canes end with Evgeni Malkin just out skating the Canes to the puck.

Malkin circled the net then made a smooth, easy pass to Chris Kunitz who couldn’t have been more open with 4 Cane defenders around him. Kunitz sent a one timer past Anton Khudobin to even the score.

Late in the Period

Late in the period was another defensive lapse when Robert Bortuzzo carried the puck into the Canes end, went untouched and sent one in for a Penguins 2-1 lead. It was almost as if two Canes were saying, “You take him, I’ve got him,” as going in like he did was like the parting of the Red Sea.

One other highlight of the first was when 5’5” Gerbe had a legal check on 6’4” Simon Despres that sent Despres flying into the boards on his backside. 6’1” Jayson Megna took exception to Gerbe playing by the rules, so he made a mistake and challenged Gerbe.

There’s a saying that goes, “Maybe it’s not the size of the dog, but the size of the bite.” That describes the Megna-Gerbe tangle. Certainly Megna had the height, weight and momentum advantage, but he wasn’t ready for Gerbe’s toughness or WWE takedown approach.

In a matter of seconds, Gerbe had Megna on the ice with the Caniacs appreciating his grit and ‘take that’ attitude. Even some of the Pens on the ice raised a few eyebrows as to how that match-up went.

The second period didn’t have any scoring but had plenty of tight checking and penalties. The 5 on 5 game was great entertainment, especially watching players off the puck. Next time you’re at a game, pay attention to a set of players matched against one another. The action off the puck is what makes attending a game so much more interesting than seeing it on TV.

While the NHL frowns on chatter between teams during TV time outs, it happens. Many times, that few seconds of trash talk leads to something more as the game progresses. Sometimes it’s good, but sometimes it will lead to a private conversation by the head coach.

After a 14 shot effort in the second, the Canes kept the pressure up in the third trying to even the score. 6’1” Christian Ehrhoff still wanted retaliation for the legal check, so he made a run at Gerbe late in the third. No harm was done other than shoving, but getting Gerbe off the ice had to be the Pens’ game plan, as Gerbe was playing lights out.

With just 1:29 left in the game, Nick Spaling took a dumb penalty and interfered with Khudobin. They put 5 forwards plus Faulk on the ice, and it paid off. Eric Staal had a shot go wide with Rask picking up the puck along the boards. Rask back stepped to the center and then sent one to the goal with Elias Lindholm tipping it in with just 11 seconds remaining for the second power play goal of the night.

Too little, too late, but certainly a confidence builder for the power play. Too bad this wasn’t a 7 game playoff series, as the first 2 games were great hockey to watch.

The next game is Tuesday night at home against Nashville.

Canes coverage by Bob Fennel. Photo from the Pittsburgh Penguins on Facebook.