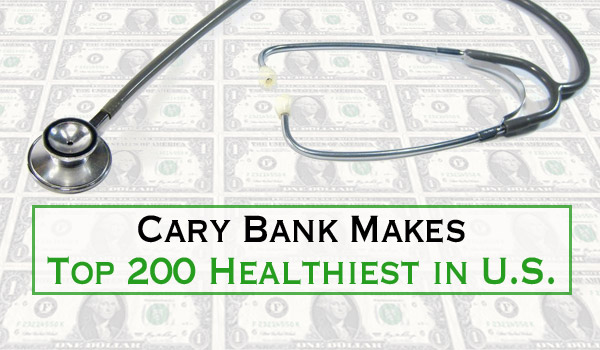 DepositAccounts.com released that the First Flight Federal Credit Union on Kildaire Farm Road was ranked #65 out of over 6,600 credit unions in America. First Flight is the only credit union in North Carolina named to the list.

It is an honor to be ranked one of the Top 200 Healthiest Credit Unions in America. Our success is due to the support and determination of our staff and board of directors to remain a safe, secure and financially sound institution. For over 60 years, this commitment has provided a foundation for innovation to provide First Flight members with unparalleled tools, products and services.

First Flight Federal Credit Union, with corporate offices located in Cary, NC, is a full-service financial institution with more than 24,000 members and eight branches across the state of North Carolina.

The credit union was chartered in 1952 to serve citizens aboard the Marine Corps Air Station, Cherry Point, in Havelock, NC. First Flight FCU now provides financial services to a broad range of clients, including employees of many of the state’s largest firms in the high tech, manufacturing, pharmaceutical, legal, and service industries.

DepositAccounts.com, the creator of the review, is an independent bank account comparison company that tracks both commercial banks and credit unions in America. Multiple factors are considered by DepositAccounts.com when assigning rankings, including capitalization, deposit growth and loan to reserve ratios.

From the list of 6,600 credit unions, DepositAccounts.com recognizes those who have shown exceptional fiduciary responsibility and includes those credit unions in its Top 200 Healthiest Credit Unions in America list.

Photo by Michael and by Sarah Corriher. Design by Hal Goodtree.