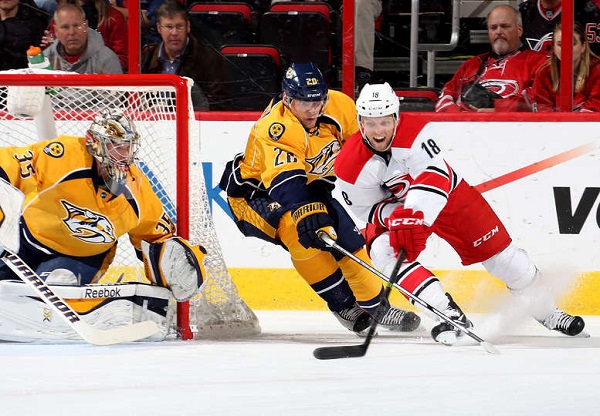 Raleigh, NC — The Carolina Hurricanes beat one of the best teams in the NHL, the Nashville Predators, 2-1 in a well played, tight game last night at PNC Arena. The Predators are led by former Canes coach Peter Laviolette with former Cane and fan favorite Matt Cullen still playing strong. Both were around when the Canes won the Stanley Cup in 2006.

Cam Ward started in goal having come off a statistically good November. His number of wins was not indicative of his play which kept the Canes in many games. This time, the Canes were finally on the right side of a one-goal game having lost 5 in November by 1 goal and two others by 2 after empty netters (which is, in effect, a one-goal game).

The Predators’ Filip Forsberg is one of Elias Lindholm’s best friends and is a leading contender for rookie of the year. He currently leads the quasi stat of +/- at +20 while also leading the Predators with 10 goals and 23 points. It’s interesting to see Lindholm talking to him before a faceoff and then fighting hard for the puck when play begins.

Late in the first, Nashville’s defense slowed the puck for the teams to change lines. Just as Taylor Beck hit the ice, he got a headman pass and broke in on Ward on a semi-breakaway. Ward shut him down, controlled the rebound and sent a message to the Caniacs to get loud and get in the game.

A few minutes later, newcomer Andrej Nestrasil carried the puck into the Preds zone then used his size and strength to fight off a defender along the half boards. Having won that battle, he sent a crisp backhander towards the crease with Jeff Skinner cutting in and, with a goal scorer’s touch, extended his stick one handed, tipping the puck over the current top goalie in the NHL, Pekka Rinne, for a 1-0 Canes lead.

The Canes picked up the offense in the second since quality shots in the first were slim. Both Rinne and Ward stonewalled everything sent their way which had the game looking as if the one goal may stand up. There were no penalties through the first two periods, as both teams must have been coached to stay out of the box.

Very early in the third, Skinner carried the puck out of the Canes end and passed it over to Victor Rask in center ice. Rask brought the puck in the Predators zone and had a defender on him but managed to get off a slap shot that turned into a knuckler from about 65’ out. This completely fooled Rinne for an impressive 2-0 Cane lead.

The Preds aren’t a team to fold from being down 2 goals in the third, so they started putting on the pressure. After the Canes failed to clear the puck around the boards, Roman Josi stopped the puck at the blue line and sent it to the crease, where Mike Ribeiro was all alone in front of Ward.

Ribeiro gloved the puck and then put it on his backhand to close the gap 2-1. With a minute to go, Riley Nash took the Canes’ only penalty. Andrej Sekera, Justin Faulk, Pat Dwyer, Ron Haisey, Tim Gleason and Jay McClement all played well, killing off the 6 on 4 powerplay to preserve the win.

Next game is Thursday against Washington.

(And for those who keep asking, we found out today that my daughter is having a baby girl! Woo Hoo!)

Canes coverage by Bob Fennel. Photo from the Nashville Predators.