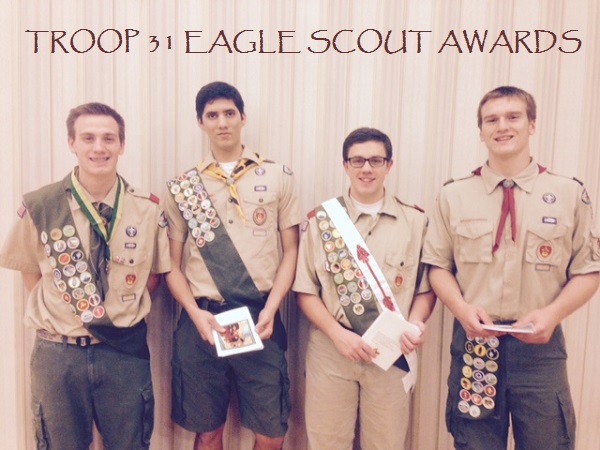 Boy Scout Troop 31, sponsored by The Church of Jesus Christ of Latter-day Saints, is proud to announce that four of their Boy Scouts were given the honorable title of Eagle Scout last month.

Scouts Adam Kharas, Daniel Emerson, JC White, and Luke Gray worked hard for this title. In order to become an Eagle Scout, a young man must fulfill all of the requirements listed by Boy Scouts of America. In addition to passing through multiple scout rankings, Eagle Scouts must also:

The Eagle Scout ranking is the highest that a Boy Scout can receive. Only 7 percent of all Boy Scouts earned this rank in 2013.

Each of the four scouts took on a different service project to obtain their new ranking.

Adam, a junior at Raleigh Charter High School, provided 100 backpacks filled with school supplies to students at Millbrook Middle School who could not afford them. Adam is the second in his family to become an eagle scout–his brother, Josh, previously earned the award as well.

Daniel, a Cary High School graduate, used his project to paint fire hydrants for the Town of Cary. Daniel leaves to serve in a church mission this month.

This honor extends not only to the scouts and to Troop 31, but to their families and the community as well. If you know any of these young men, be sure to congratulate them on their new ranking and thank them for their contributions to the community.