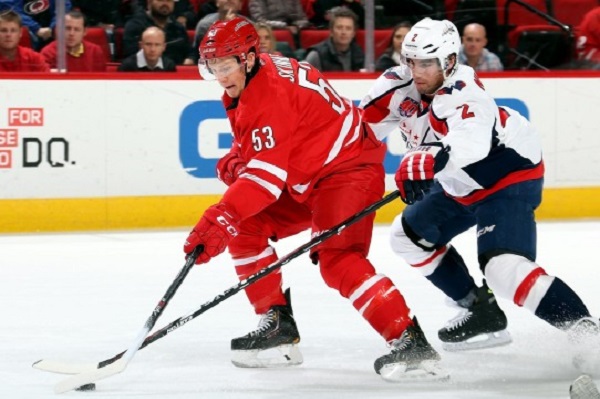 Raleigh, NC — After beating one of the better teams in the NHL on Tuesday of last week, the Carolina Hurricanes lost a close game of 2-1 to the Washington Capitals at the PNC Arena two days later on Thursday, December 4, 2014.

With Cam Ward sitting out due to another injury, Anton Khduobin got the nod for the start. ‘Doby’ also played against the Capitals about a month earlier in D.C. and lost by one goal in overtime. Doby is still winless this season; however, his record is not at all indicative of how he’s played.

Overall, he’s played well, and it’s defensive lapses that have enabled the opposition to the all-too-often get breakaways or odd man advantages.

Rookie Michal Jordan mishandled the puck at the Caps’ blue line. Speedster Jason Chimera pushed the puck forward, then it was off to the races as Jordan couldn’t catch Chimera.

Chimera took a wrister that Doby had the right angle. He made the save but, because Ron Hainsey was trying to get to Chimera, Jay Beagle was left all alone for an easy tap in off the rebound.

The Second Was a Snoozer

Overall, both teams played flat in the second.

Putting the first period behind him, Hainsey had a solid rest of the game. The Caps had a couple of power plays in the second, but Pat Dwyer was a complete pest. He’s one of the faster Canes and used his speed and tenacity to make sure the Capitals didn’t score on the man advantage.

The line of Jeff Skinner, Elias Lindholm, and Eric Staal was great while the players were together. Staal didn’t leave anything on the ice this game. He may not be the fastest player getting back on defense, but he’s using his upper body strength, digging and winning the puck while trying to set up Skinner or Lindholm.

Skinner was more physical than he was in the past few games, and Lindholm is turning out to be a physical player that has skill. The Canes have to be pleased with his progress–especially since he is just over 20.

The Canes finally ‘arrived’ at the game in the third. From the first faceoff of the period to the last minute, the Canes were a completely different team. It makes you wonder what adjectives were stated in the locker room between periods.

Riley Nash brought the puck into the Caps’ end early in the period. After a shot by Juri Tlusty, the puck went around to John-Michael Liles on the point. Liles passed over to Jay Harrison, and Harrison connected on a gutsy pass cross-ice to Alex Semin.

Semin put the puck on his backhand, went to the high slot, and then put a wicked backhander top shelf off the crossbar to tie the game.

Everyone hopes this first goal of the season for Semin and his 500th NHL point will be the ice breaker for more goals to come. Semin’s history reveals that he is a streaky scorer, so this may be the start of him performing as what he’s being paid to do.

Late in the period, the second bad defensive lapse led to the Capitals’ second goal. The Canes had possession and were clearing the puck out of their zone, but a weak pass was intercepted by Eric Fehr who went in all alone on Doby for an unassisted goal that turned out to be the game winner. Two defensive lapses yielding 2 goals, and Doby is still winless.

The next game is Sunday at 5 against Detroit.