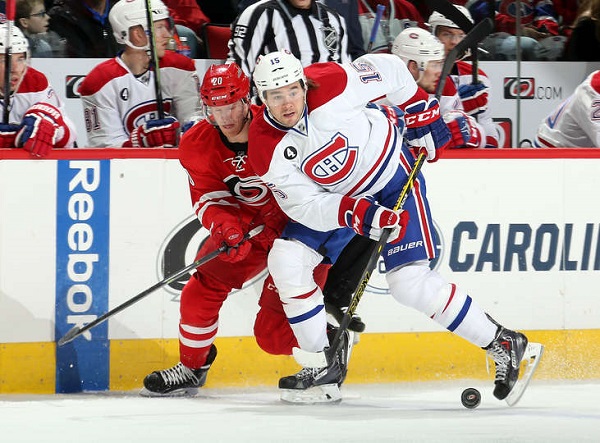 Raleigh, NC — The Carolina Hurricanes lost a game that was hurtful everywhere. Hurtful as in another loss–this time to the Montreal Canadiens 3-1 at the PNC Arena on Monday, December 29, 2014.

It was hurtful that the Canes could, again, only muster one goal, hurtful that Cam Ward had another strong game in net without a win, hurtful that great scoring chances were squandered, hurtful that missed assignments resulted in Habs’ goals and hurtful, as a Caniac, to see the team just not gelling.

As bad as it sounds, it wasn’t all bad. The good news is that Jordan Staal made his return to the lineup for the first time since he broke his leg in the preseason. Overall, he had a very good first game back with three hits, over 19 minutes of ice time, excellent face-offs, and an assist on his brother’s goal.

A Great Year for the Canadiens

Montreal is having a great year flip-flopping with Tampa Bay as the leader in the Atlantic division, so the Canes needed everyone, as Coach Peters calls it, “starting on time.” The Canes responded by coming out in the first with the extra step.

Jeff Skinner is known for being a goal scorer, but his fore-checking in the first was outstanding. He must have had some talks with Nathan Gerbe, Pat Dwyer, and Jay McClement, among a few others that do a great job fore-checking.

The highlight of the period was a heavyweight bout between Brad Malone and Brandon Prust, who has had several fighting majors this season. In all honesty, Malone won. I’m not sure what caused the fight–it was right after a face-off–so, maybe, there was some long-standing bad blood. 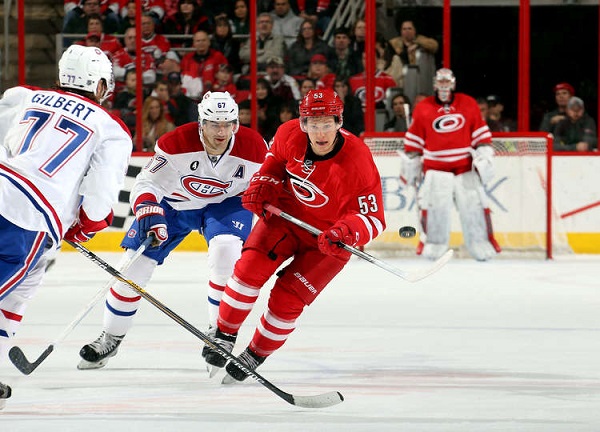 Jeff Skinner #53 of the Canes eyes the puck as Tom Gilbert #77 and Max Pacioretty #67 of the Canadiens close in to defend him.

The second period started like a mirror image of the first–close checking by both teams, lots of banging along the boards, and good goal tending at both ends.

Jiri Sekac argued a call, but it was a clear, senseless trip he made on Tim Gleason. Both units of the Canes’ power play looked good–long possessions, traffic in front of Carey Price, and shots taken…but both couldn’t produce the important first goal. The Habs had an unbelievable 12-0 record when they scored the first goal.

Just as Sekac came out of the box, the puck went into the Canes end. Ron Hainsey swatted the puck backwards, but it landed on Sekac’s stick. Sekac realized the Canes were out of their normal defensive positions, did a little dancing, then went through the high slot, sending a backhander that cleared the traffic and went in for the 1-0 lead.

Skinner had two shifts back-to-back and made sickening slick centering passes to Riley Nash who probably had nightmares about Price’s glove saves. Late in the period, Michal Jordan may have been trying to pass to Skins at the blue line, but he didn’t have enough “oomph” on the pass.

Skinner got out-muscled by Sergei Gonchar, who passed to Dale Weise, then gave a quick tap to Lars Eller for a nice upper corner goal for a hurtful 2-0 lead. Just before the goal, Dwyer took an errant pass to the side of the head: hurtful.

Early in the third, the Canes were on a power play. It has to be noted that all-star P.K Subban was in the box for tripping EStaal but that he argued both the entire way into the box and when he got out of the box. Yes, it was a trip, but you have to be impressed with his competitiveness.

As karma was on the Canes’ side for a change, Jiri Tlusty brought the puck into the O-Zone then immediately passed to JStaal on the left. EStaal had just crossed the blue line on the right, so Jordan passed over to his big brother who sent a hard shot that Price stopped with the chest protector.

As coaches in every sport preach, Eric followed his shot, got the rebound, and chipped it in over Price’s pad to get the Canes on the board. Rather than give the normal high fives to the teammates on the bench, EStaal skated to the far end of the bench looking away, towards the ice, with no high fives. He sat down, and he wasn’t smiling.

To sum it up: hurtful, and there’s got to be more behind that than we know. The Habs’ third goal was an empty netter–just adding more hurt to a tough night for the nearly sold out crowd.

The best sign of the night? Take Back Bieber beat the “She’s My Sister” arrow during the Kiss Cam.

Weekend: The First of 2015
Scroll to top