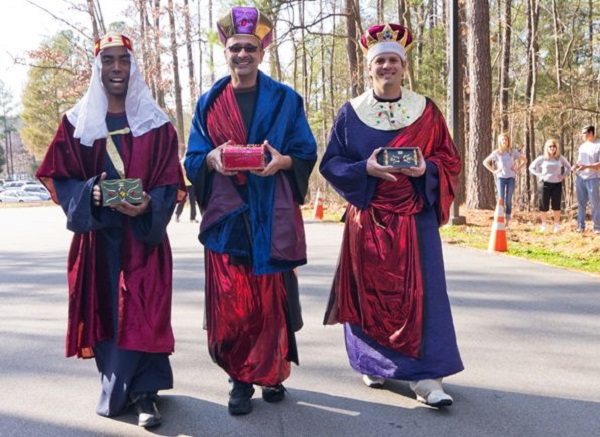 Cary, NC — Cary’s annual Three Kings Day Parade will be held on January 10, 2015 in Downtown Cary to celebrate Hispanic/Latino culture and to give to those in need.

For many, Christmas doesn’t end on December 26. In fact, the holiday season doesn’t officially end until “The 12th Day of Christmas,” which falls annually on January 6. This holiday, known as the “Feast of the Epiphany” or “Three Kings Day,” marks the biblical adoration of baby Jesus by the three Wise Men.

Many Christians recognize this post-December 26 Christmas season, but January 6 is a very important day for the Hispanic/Latino community in particular. On Three Kings Day, gifts are exchanged in most Spanish speaking and in some European countries to recognize the season of giving and love.

Since 2004, Diamante Inc. has hosted a Three Kings Day parade in Cary to keep traditional Hispanic holidays alive in the community and to present gifts and groceries to families and children in need. This year, the organization invites the entire community to celebrate their 10th annual Three Kings Day Parade in Downtown Cary on January 10, 2015 from 1-2 pm.

David Flores, President of Diamante, explains that, “This event teaches our children the magical traditions of the Epiphany while sharing cultural observance with all members of the community.”

During the parade, the Three Kings of the East will march along N. Academy Street the streets with the prince and princess of the parade along with folkloric groups, local businesses, and other non-profits.

Even more importantly, this event will provide food and gifts for more than 400 children and 250 families–all pre-registered through different agencies such as Wake County Human Services, Wake County Public Schools, and local authorities.

This event is free and open to the public–but everyone in the community is encouraged to volunteer, donate, and participate in the celebration of giving and fun. Contact Fiorella Horna at 4diamantedirector@gmail.com for more information.