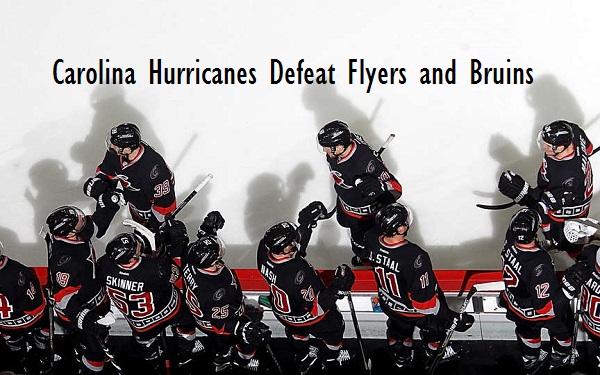 Raleigh, NC — The Carolina Hurricanes are back on track in the new year. After a string of losses, they beat two teams in home games at the PNC Arena over the weekend. On Thursday, January 2, 2015, they beat the Philadelphia Flyers, and, two days later, they beat the Boston Bruins.

Technically, the Canes are undefeated in 2015–which is one way of looking at the 2-1 win over the Philadelphia Flyers on Friday, January 2, 2015 at the PNC Arena. The Canes were involved in eight 2-1 games (albeit the Habs won 3-1 with an empty netter) in December alone.

The team did win two of those but, for the Caniacs, it does seem like it has been forever since we were on the right side of a close game.

A Much Needed Game

The Canes needed this game for so many reasons, as the Flyers spanked them 5-1 in Philly last month in one of the worst games of the season for the Canes. The Flyers have a healthy payroll but seem to be having a team chemistry problem–which may be why they’re not a playoff team this year.

Jordan Staal returned to the line-up after sitting out the last game for precautionary measures. A player had landed on his recently healed broken leg late in his first game of the season, and he went off the ice is obvious pain.

Cam Ward has been one of the hottest goalies in the league and, coming up with unbelievable saves, has a high save percentage along with one of the lowest goals against numbers in the league. The Canes wanted him to get a win and, most of all, they wanted a win for the home crowd.

Midway in the first, Mark Streit disqualified Zack Boychuk for coming in over the blue line, but Boychuk stayed with his man and made an excellent sweep check to steal the puck and clear the zone. Brad Malone picked up the puck just over the blue line and made a dash up the left wing to the goal.

Ryan Murphy joined the rush on the right side for a two-on-one advantage. Malone glanced over to Murphy but sent a hard slap shot off the crossbar glove side for his first goal this season, giving the Canes a 1-0 lead. 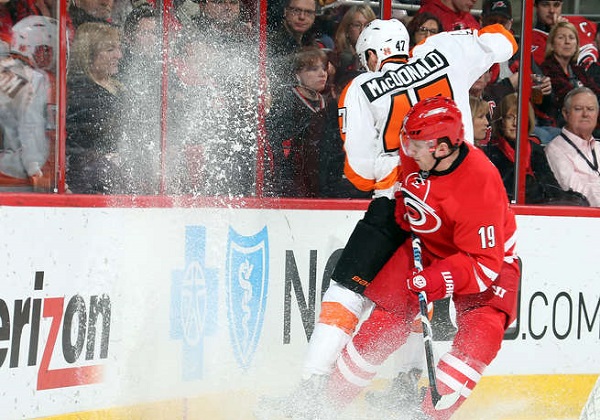 Jiri Tlusty #19 of the Carolina Hurricanes battles for the puck with Andrew MacDonald #47 of the Philadelphia Flyers.

The Canes started the second with the top line of Eric Staal, Jordan Staal and Elias Lindholm up front with Andrej Sekera and Justin Faulk on defense. The Canes won the face-off and went on the attack.

JStaal made a good move to get around his defender then sent a hard shot off the upright with a ‘clang’ sound of about 80 decibels. Lindholm snared the rebound off the mid boards and sent it over to Faulk on the right point.

Faulk’s slap shot bounced off Mason’s chest protector, and JStaal took a quick wrister that Mason couldn’t get under control–allowing Eric to swat the bouncing puck in with authority and fall over Mason’s pads at the same time.  Unlike his last goal, Eric immediately pointed to Jordan, acknowledging a good play and high-fiving the team as he returned to the bench.

Being up by two goals after two periods, both the Canes and the Caniacs were feeling that a victory may finally be at hand. There was only one question: Would Ward earn his second shutout of the season?

At nearly the midway point of the period, Vincent Lecavalier received a pass at his own blue line then gave a lesson on skating past several opposing players. He entered the offensive zone then left a nice drop pass to Chris VandeVelde who sent a wrister past Ward to ruin the shutout and cut the lead in half.

The Canes buckled down after that, and special mention has to go to Nathan Gerbe, Pat Dwyer, Jay McClement, Victor Rask, Jiri Tlusty and Chris Terry, as all played excellent games. Ward finally got on the right side of a 2-1 game, but this was a complete team effort and, as Coach Bill Peters says, “Everyone started on time tonight.”

Rumor has it that Malone said he wouldn’t shave until he scored–so I made a note to check that out during the next home game on Sunday.

The Carolina Hurricanes beat the Boston Bruins 2-1–yes, another 2-1 game–in a rare Sunday afternoon game at the PNC Arena on January 4, 2015. The Bruins were pegged to be a strong Stanley Cup contender this season but, lately, they’ve had some issues.

This loss gives the Bruins three straight losses after regulation with the points slipping by as they are now out of a playoff spot. There are rumors everyday about a trade involving the Bruins but, with their payroll near the salary cap, any trade for a key player will result in losing a key player.

Anton Khudobin and Tuukka Rask were putting on a goalie show, as each played outstanding games. Rask was busy early on with the Canes peppering shots from all over. The Canes had an 11-0 shot advantage through the first 17 minutes but, once the Bruins realized shooting might lead to a goal, they made up for lost time.

Jeff Skinner was back in the line-up after a bout with the flu that kept him out of Friday’s game. Skins didn’t look 100%, but his 80% is better still than most. It’s a game of numbers now and having Skinner on the third line is tough to swallow–but performance is key.

Skinner did draw the first penalty when Zdeno Chara grabbed Skins just as he was making a move to the net. Late in the period, the energy line of Brad Malone, Jay McClement and Pat Dwyer were doing what they do best–being relentless deep in the offensive zone. 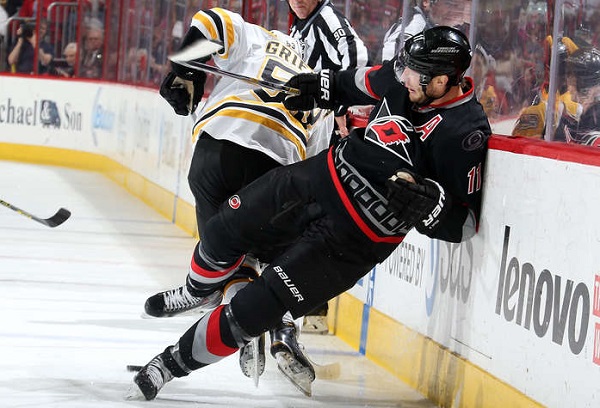 Jordan Staal #11 of the Carolina Hurricanes loses an edge while battling along the boards with Seth Griffith #53 of the Boston Bruins.

Hard Work Pays Off for Dwyer

From behind the net, McClement passed over to Dwyer just below the faceoff circle. Dwyer sent an impossible angle shot to the net that Rask kicked out to the high slot. Malone jumped on the rebound and sent a wrister directly at the Bruins’ logo on Rask’s sweater, but Rask couldn’t control the rebound. Dwyer zigged and zagged between two defenders to get his stick on the rebound and forced the puck into the net.

With the assist, Malone achieved a Gordie Howe Hat Trick over the past two games with his decisive major fighting penalty earlier in the period and his goal from Friday’s game.

Khudobin Misses Out on Shut Out

The second period resembled a heavy weight-boxing match. There weren’t any fights but it was constant up the ice at one end, pounding away a shot, and then a good save with the flow going down to the opposite end with the same effort and, for the most part, the same result.

Unlike the game against Montreal, in which it seemed icing calls were quite frequent, icing was rare as both teams executed short, crisp passes. Just as the Canes were clearing the puck, Justin Faulk got a stick to his cheek, putting a gash just below his left eye.

Unfortunately, most of the 17,212 in attendance saw it but, somehow, both refs didn’t.

Boston took advantage of the no call and, with the Canes having difficulty getting the puck out of their defensive zone, Brad Marchand sent a centering pass to the high slot to Patrice Bergeron–who sent a one timer to the stick side of Dobby to tie the game at 1 apiece.

Maybe it can be interpreted that the refs weren’t having a great game but, early in the overtime, one of the anomalies of hockey occurred when Reilly Smith pulled down Victor Rask to the ice, and the calls were Holding on Smith and Embellishment (Diving) on Rask.

In my humble opinion, it should be either-or, never both. When a player is hauled to the ice by an opposing player grabbing an arm and the stick and then falling to the ice himself, it seems pretty clear to me that the Holding call was justified.

The Canes defense played outstanding, limiting the high-powered Bruins to just two shots on goal in the third after on four in the first and just 20 for the entire game. Ron Hainsey, Faulk, Ryan Murphy, Andrej Sekera and Brett Bellemore all had games that won’t make the score sheet but that will be noticed with approval by coaches and knowledgeable fans.

For the second time this year, the Canes won a shootout with Dobby stopping all three attempts and Eric Staal scoring the lone goal to win it for the Canes, keeping the undefeated streak in 2015 alive.

I’m not sure if this means anything, but I believe Jacques Martin was on Press Row. Martin is a former NHL coach and is now with the Penguins–a team with which the Canes have a long history of player trades.