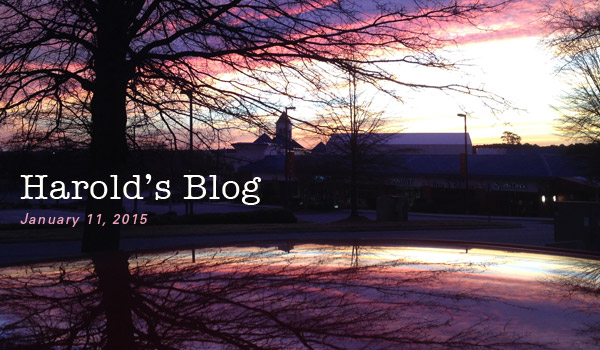 Cary, NC — This week was the first full week of the year, and my schedule is slowly beginning to ramp up to full speed.

Wednesday I represented Cary at a public hearing held in Apex by the North Carolina Division of Water Resources on Cary’s Interbasin Transfer Certificate Modification request. Since Cary is divided by a ridge line, we are in two river basins: the Neuse and the Cape Fear.

The plant, the $300 million Western Wake Regional Wastewater Management Facilities, opened last fall. In 2013, the law regarding IBTs (Interbasin Transfers) was changed by the General Assembly. We are requesting modifications to our certificate to meet these changes and to ensure environmentally responsible and cost-effective water resources management through 2045.

My remarks were as follows:

Good evening. I’m Cary Mayor Harold Weinbrecht and, on behalf of the Cary Town Council and the more than 150,000 people who call Cary home, I want to thank the North Carolina Division of Water Resources for facilitating a comprehensive and inclusive process to ensure that the requested modification to the current interbasin transfer certificate does not adversely impact our region’s environment.

I am pleased to be commenting in favor of our requested modification to the current interbasin transfer certificate. This modification is necessary in order to be consistent with the 2013 changes to IBT law by the General Assembly and to ensure environmentally responsible and cost-effective water resources management through 2045.

The 2013 changes to the IBT law require updating methodologies and assumptions with IBT calculated as a daily average of a calendar month instead of as a maximum daily average. The requested IBT certificate modification, like the existing certificate, will be based on a 30-year planning period, which is consistent with the planning period for the Round Four Jordan Lake water supply allocation process currently underway.

I am happy to report that analysis performed by the North Carolina Division of Water Resources for 2060 shows that the requested IBT certificate modification will have no detrimental impact on any downstream communities’ ability to meet their water supply needs.

In November, these municipalities jointly opened the Western Wake Regional Wastewater Management Facilities, a $300 million system of wastewater pump stations with a water reclamation facility to return clean, high-quality wastewater to the Cape Fear basin. This was one of the largest and most successful public works projects in the recent history of our state, and we are very proud of our work and the results.

Each of these programs either represents firsts in the state, firsts in the region, or award-winning efforts by the Town of Cary, and it is with this history and this culture that we come to you with this certificate modification request.

We are committed to effectively and efficiently serving the region and being good neighbors to those downstream. As Mayor, I give my personal pledge that our organization will continue to be good stewards of our finite natural resources.

In closing, we appreciate being given the opportunity to comment on this project and the fair, full, and science-based consideration we know the agency will give to our request. Thank you.

Other elected officials speaking in favor of the IBT modifications included Mayor Sutton of Apex, Mayor Pro-Tem Johnson of Morrisville, and Wake County Commissioner Hutchinson. There will be another public hearing held in Fayetteville in the upcoming weeks.

Thursday the council held two quasi-judicial public hearings. This first hearing was whether or not to approve a site plan for a bank at the Bradford development at Davis Drive and High House. The council unanimously approved the 8626 square foot bank with no modifications to the town’s development standards.

The second hearing was a site plan approval for the Crowne at Cary Park Apartments. This was not a decision of whether or not to approve the apartments. That decision was made in 2006. This was a decision to approve or disapprove five modifications to the development standards.

The council unanimously agreed to accept a payment to install a traffic signal at the Cary Glen Boulevard/Carpenter Fire Station Road intersection, to a 9.5% reduction in parking, to the use of retaining walls for stormwater control, to eliminate connection to the Duke Energy substation, and to eliminate the sidewalk that would lead to the Duke Energy substation. The quasi-judicial hearing lasted about 1 ½ hours.

In Remembrance of Jean Ladd

This week lifelong Cary resident Jean Ladd passed away. She and husband Dick Ladd were one of the few couples that were born and raised in this area and experienced Cary growing from a very small community to the 7th largest municipality in the state. My thoughts and prayers go out to her family and friends.

Cary and Raleigh received another accolade this week. The Milken Institute ranked the Raleigh-Cary area #5 in the nation for “Best-Performing Cities.” In their comments, they said:

Although this area experienced solid employment growth over the past several years, it was the acceleration in job creation in 2014 that boosted it in our rankings. The area is becoming one of the leading innovation hubs on the East Coast, as witnessed by its 11th-place ranking in the importance of high-tech to its economy.

Emails from staff this week included a news release about work beginning on Walnut Street from the US 1/64 southbound ramp to Piney Plains Road and Buck Jones Road from Walnut Street to the Best Motor Imports business.

There will be access to all businesses and citizens who live within or adjacent to the construction area throughout the project. The cost of the project will be about $7 million including right-of-way acquisition. This will be funded by NCDOT and the Town of Cary.

Based on this information, and on other information I have received, it appears that Cary’s growth boom of 2013 has leveled off and that point is reflected in our 12 month population growth rate of 2.85%.

In other emails, I received information about school capping from school board member Bill Fletcher. On January 20, 2015, the board will vote on staff recommendations to change capping. If approved, the following will be implemented:

In other related information, the school board will meet with the county commissioners on January 26th.

Emails from citizens this week included a complaint about noise from Austin Foods, questions about speed limit changes, a request to provide close captioning of council meetings, and a complaint about the operation of heavy equipment in Carolina Preserve during early morning hours.

In last week’s journal I stated that if the General Assembly changes the sales tax formula, the impact to Cary, combined with the Privilege License change, could result in a loss of about $6 million in revenue. I also stated that this would be about 5 cents to the tax rate.

That was not correct. One penny on Cary’s tax rate is equivalent to about $2.2 million, so the loss would be 2 3/4 cents to the tax rate.

Next week mayoral activities include a presentation of a preliminary version of the State of the Town, a town council meeting, and the MLK Dreamfest activities.

Well, that is all for this week. My next post will be on Sunday, January 18th. Although I have Facebook and Twitter accounts those are not the best means of communications with me. Please send all Town of Cary questions or comments to Harold.Weinbrecht@townofcary.org and email personal comments to augustanat@mindspring.com.