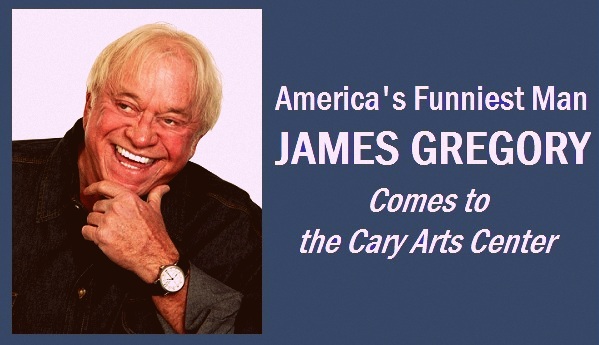 Cary, NC — James Gregory, comedian and nationally-syndicated “Funniest Man in America,” will make his Cary debut with a show at the Cary Arts Center on this Friday, January 16, 2015.

Friday marks James Gregory’s first appearance in Cary–but this comedian is no newbie to performing. Gregory, who is nationally known as the “Funniest Man in America” and as “America’s Clean Comedian,” is constantly touring and performing. He has been a stand-up comedian for over two decades.

Gregory has been featured on more than 200 radio channels throughout the country, and he has entertained over 300 major corporations including the Coca Cola Company, Hewlett Packard, and the American Red Cross. He has set attendance records in many of the venues in which he has performed.

Yes, he’s famous, but you’ll have trouble finding any flashy ads or exposure about this comedian. In fact, Gregory entertains his audiences in a carefully-crafted, old-fashioned style that contains no vulgarity. His shows bring audiences back to a simpler time “when people actually talked to each other without a cell phone in their ear.” James Gregory explains that:

I have lived long enough to know people, to know life. My comedy is based on my life experiences. It’s real, it’s funny, and the audience loves it. That’s why I’m still in business.

Gregory also asserts that his values and his upbringing are a direct result of his comedy and his success. He was born in a rural town in Georgia and was working 37 hours a week by the time he was 13. As an adult, Gregory worked for the U.S. Postal Service and the Department of Defense before he discovered his passion for stand-up comedy.

His “clean” style of humor may sound unique but, because of these elements, the comedian’s shows are perfect for families and kids. Many of Gregory’s jokes are centered around observations of crazy relatives, people obsessed with even the smallest change of weather conditions, and modern parenting styles.

Whether you have a sense of humor or just love a great story, this upcoming performance at the Cary Arts Center should, without a doubt, be full of fun and laughs.